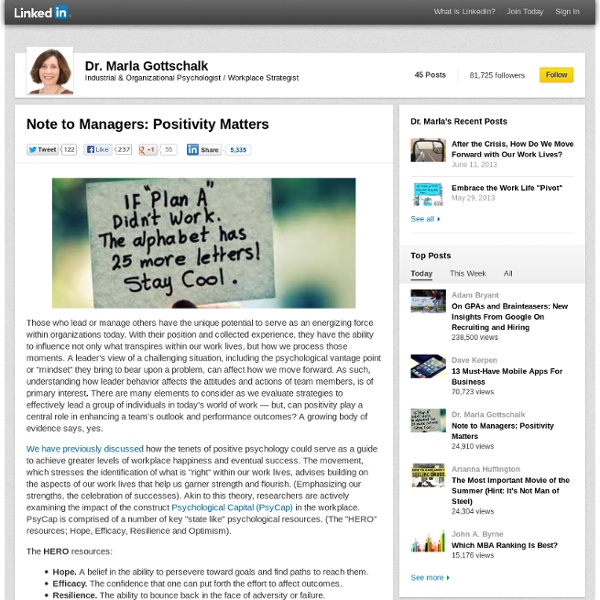 The New Leadership is Horizontal, Not Vertical Several decades ago, when “leadership” became a Big Thing, it was heavily personality-based. It posited Leadership as something done by Leaders, who had learned the art of how to Lead. As a consultant friend of mine, Renee Wingo, put it, “It’s a subject whose proponents can’t figure out whether it’s a noun, a verb, or a gerund.” Leaders were thought of as those who were followed by others. This dichotomy fed the idea that there are two kinds of people in this world – those who lead, and those who follow. Besides reinforcing the personality-based view of leadership, it raises the classic make or buy question – are Leaders just born, or can their secrets be unlocked and learned by others? Finally, this distinction between leaders and followers fed a natural assumption that those roles were vertically related within an organization. Warren Bennis was (and still is) the [leading] guru of leadership. Away from Personality-based Leadership That was then; this is now. Enter Horizontal Leadership

To Give Your Employees Meaning, Start With Mission - Teresa Amabile and Steve Kramer by Teresa Amabile and Steve Kramer | 11:00 AM December 19, 2012 It is impossible to have a great life unless it is a meaningful life. And it is very difficult to have a meaningful life without meaningful work. -Jim Collins Do you feel that you have work worth doing? Must it be this way? Why is meaning so important? Unfortunately, too many companies don’t even try to make work meaningful for the people doing it. The Company’s primary objective is to maximize long-term stockholder value, while adhering to the laws of the jurisdictions in which it operates and at all times observing the highest ethical standards.Dean Foods Company Mike Brenner and Steve Van Valin, of the consulting firm Culturology, talk about sources of “meaning amplification” that managers can tap in their quest to sustain employee engagement. To accomplish this, leaders have two tasks. Our mission: to inspire and nurture the human spirit — one person, one cup and one neighborhood at a time.Starbucks Coffee

Want to Succeed in Consulting? 3 Ways to Get Paid for Your Wisdom | BNET Last Updated Sep 12, 2011 4:19 PM EDT Through writing this blog I recently made a friend all the way over in Jakarta, Indonesia. Ben Whitaker is a U.S. expat and reader who is running a company focused on selling high-end IT services to the mining industry. Here's what Ben wrote to me: One topic I'm concerned about is my current strategy of doing analysis and recommendations as a proposal, then seeing that 4-page document get sent out the door by the prospective client as more or less an RFP to my competition.Have you written a piece about that? OK, how many of us have had to deal with the problem of free consulting that Ben's describing? In the world of selling expertise, you must show your expertise first in order to prove that someone should pay you for it. Ben is describing a really thorny, but frequent challenge. 1) Create a custom, self-branded assessment process. 2) The assessment is valuable and therefore carries a fee. Photo courtesy of Flickr kate e. did cc

Einstein's Puzzle # Copyright (C) 2004 Lauri Karttunen # # This program is free software; you can redistribute it and/or modify # it under the terms of GNU General Public License as published by # the Free Software Foundation; either version 2 of the License, or # (at your option) any later version. # This program is distributed in the hope that it will be useful, # but WITHOUT ANY WARRANTY; without even the implied warranty of # MERCHANTABILITY or FITNESS FOR A PARTICULAR PURPOSE. See the # GNU General Public License for more details. Einstein's Puzzle Variations of this riddle appear on the net from time to time. It is sometimes attributed to Albert Einstein and it is claimed that 98% of the people are incapable of solving it. Some commentators suggest that Einstein created such puzzles not to test out intelligence but to get rid of all the students who wanted him as an advisor. Let us assume that there are five houses of different colors next to each other on the same road.

What Is Wirearchy ? Over the past 10+ years, ask thousands of people have asked me “what is wirearchy?” There’s one common misconception that I’d like to clear up first, which is that wirearchy is mainly about technology. If anything, wirearchy is about the power and effectiveness of people working together through connection and collaboration … taking responsibility individually and collectively rather than relying on traditional hierarchical status. Most people today know that the Internet and the Web have had a lot of impact on our daily lives .. we’ve seen the rise (and sometimes fall) of initiatives like Napster, Amazon, eBay, Dell, blogging, Flickr, MySpace, YouTube, Facebook, Twitter, advertising’s ongoing (and increasingly contentious) shift to the Web, and the rise of a vast networked range of political and information-gathering and dissemination activities. Interconnected information flows generates a new emergent organizing principle Wirearchy is an (emerging) primary organizing principle.

10 Things Managers Should Never Do | BNET Last Updated Oct 25, 2011 11:29 AM EDT We've all had bosses do things we didn't like, appreciate, or respect. And every manager has done things they later regret. The business world is, by necessity, one of real-time decisions and judgment calls that sometimes turn out to be bad choices, in retrospect. After all, nobody's perfect. But sometimes a mistake can become a slippery slope. In 10 Things Great Managers Do, I went back in time to the best characteristics of the best CEOs I've worked for and with over the past 30 years. Keep in mind, this isn't meant to be a whine-fest to get employees riled up and pissed off at their bosses. 10 Things Managers Should Never Do Order people around like dictators. Forget about customers. Behave like arrogant jerks that are better than others. Let their egos write checks that reality can't cash. Publicly eviscerate employees. Wall off their feelings. Surround themselves with bureaucrats, BSers, and yes-men. Threaten. Act out like little children.

News - Is it good for people to fail occasionally? 2 March 2014Last updated at 19:47 ET By Lucy Wallis BBC News In our highly competitive world, we prize success and hate it when things go wrong, but is there actually a value in failing? When Irish author Flann O'Brien submitted the manuscript for his second book, The Third Policeman, to a London publisher in 1940 it was rejected. But rather than admit this lack of success to his friends, he pretended the manuscript had accidentally blown out of the boot of his car on a trip to Donegal and had been lost forever. "This was a ruinous thing to say because he couldn't then turn around and say, 'Oh I've found it again,' so the manuscript sat very openly on his sideboard until his death," says Booker Prize-winning author Anne Enright. "The year after [O'Brien's] death, his wife got it published to a keen reception." If O'Brien had been more open about his failure to get the book printed, he might have seen his work published within his lifetime. Continue reading the main story “Start Quote

The 10 Key Legal Documents for Your Business Documents play an essential role in protecting the interests of the business and business owners over the course of a company’s lifetime. Here is a list of the 10 most common legal documents to help you determine what your business needs. 1. Company bylaws for corporations. Most states require corporations to keep a written record of bylaws, although you don’t need to file the document with a state office. Related: The Legal Ins and Outs of Forming a Partnership 2. Your minutes should be detailed enough to serve as your corporation’s “institutional memory.” 3. 4. Related: Rocket Lawyer: Cutting Out Small Business Attorneys' Fees 5. 6. 7. 8. 9. 10. In most cases, you don’t need to create any of these documents from scratch. Related: Using the Web to Get Legal Information

21 Rules That Men Have. Number 7 Is So True. 10) You can either ask us to do something or tell us how you want it done. Not both. If you already know best how to do it, just do it yourself. 11) Whenever possible, please say whatever you have to during commercials. 12) Christopher Columbus did not need directions and neither do we… 13) All men see in only 16 colours. 14) If ask what is wrong and you say ‘Nothing’, we act like nothing’s wrong. 15) If you ask a question you don’t want an answer to, expect an answer you don’t want to hear... 16) When we have to go somewhere, absolutely anything you wear is fine... really. 17) Don’t ask us what we’re thinking about unless you are prepared to discuss such topics as football or motor sports. 18) You have enough clothes. 19) You have too many shoes. 20) I am in shape, round is a shape! 21) Thank you for reading this, yes I know, I’m sleeping on the couch tonight… but did you know men don’t really mind that? Enjoyed this list?

Dreyfus model of skill acquisition In the fields of education and operations research, the Dreyfus model of skill acquisition is a model of how students acquire skills through formal instruction and practicing. Brothers Stuart and Hubert Dreyfus proposed the model in 1980 in an influential, 18-page report on their research at the University of California, Berkeley, Operations Research Center for the United States Air Force Office of Scientific Research.[1] The original model proposes that a student passes through five distinct stages: novice, competence, proficiency, expertise, and mastery. The original five-stage model[edit] Michael Eraut summarized the five stages of increasing skill as follows:[2] Instead the original Dreyfus model is based on four binary qualities: Recollection (non-situational or situational)Recognition (decomposed or holistic)Decision (analytical or intuitive)Awareness (monitoring or absorbed) This leads to five roles: 1. Example uses of the model[edit] Criticism of the model[edit] See also[edit]

Brainwave entrainment Brainwave Entrainment is any practice that aims to cause brainwave frequencies to fall into step with a periodic stimulus having a frequency corresponding to the intended brain-state (for example, to induce sleep), usually attempted with the use of specialized software. It purportedly depends upon a "frequency following" response on the assumption that the human brain has a tendency to change its dominant EEG frequency towards the frequency of a dominant external stimulus.[citation needed] Such a stimulus is often aural, as in the case of binaural or monaural beats and isochronic tones, or else visual, as with a dreamachine, a combination of the two with a mind machine, or even electromagnetic radiation. Hemispheric Synchronization, a potential and generally desired result of brainwave entrainment, refers to a state when the brainwave pattern of the right and left hemispheres become alike. A person with similar activity in both hemispheres is alleged[by whom?] History[edit] Notes[edit]