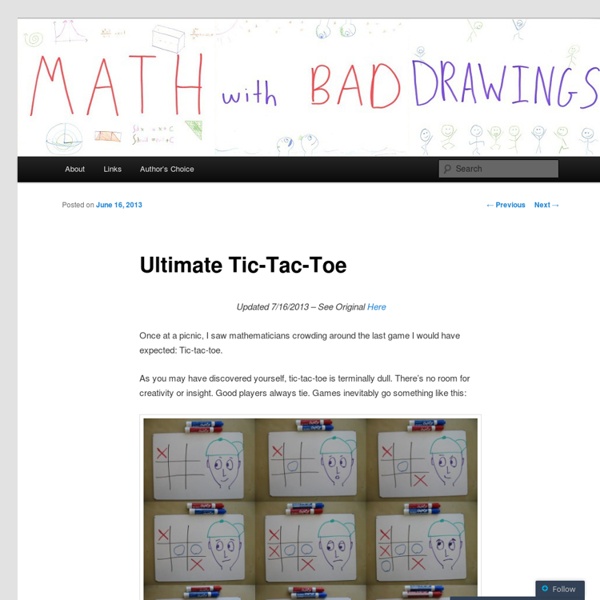 Updated 7/16/2013 – See Original Here Once at a picnic, I saw mathematicians crowding around the last game I would have expected: Tic-tac-toe. As you may have discovered yourself, tic-tac-toe is terminally dull. There’s no room for creativity or insight. Good players always tie. Games inevitably go something like this: But the mathematicians at the picnic played a more sophisticated version. As I watched, the basic rules emerged quickly. Each turn, you mark one of the small squares. But it took a while for the most important rule in the game to dawn on me: You don’t get to pick which of the nine boards to play on. Then your next move must be here… This lends the game a strategic element. The resulting scenarios look bizarre. A few clarifying rules are necessary: What if my opponent sends me to a board that’s already been won? What if one of the small boards results in a tie? When I see my students playing tic-tac-toe, I resist the urge to roll my eyes, and I teach them this game instead.

Related:  LUDOMATICA on the road • Making

Transistor Tester Theory With all the circuits I make, I end up with a lot of circuits hanging about. Not many of my projects are permanently used, their parts being recycled into new projects. Even fewer achieve the final accolade, "box status", so it is a measure of how pleased I was with the design that this project was instantly built into a box with its own interfacing circuit. So let's see what we need to do to build an intelligent transistor tester. First off, remember that we think of electricity flowing from the positive terminal to the negative one, whereas it is actually a flow of electrons the other way round.

Color Sudoku Puzzle Color Sudoku Puzzle Description: Fill all of empty squares in the grid with a picture. Each picture may appear only once in each row, column, and 3x3 box. Each puzzle has only one solution. If you get stuck, you can click the 'give me a hint' button and any errors you have made will be highlighted in red; or if you've made no mistakes, a green square will show where you can go next. If you try to place a picture where it already exists on that row, column, or small square, both occurrences will be highlighted in red.

Can a Puppy Sell a CMS? We all know humans are hardly rational agents when it comes to buying decisions, often emotional reactions plays almost as large a role as facts, figures and logic. Choosing a CMS is often a long process involving careful evaluation of the flexibility of the content model, the power of the template engine, the level of separation between design and content, etc. But even so, there's still plenty of space for the purely irrational to play a role.

2048 Join the numbers and get to the 2048 tile! New Game How to play: Use your arrow keys to move the tiles. When two tiles with the same number touch, they merge into one! Ultimate Tic Tac Toe is always won by X – Blog – Joachim Breitner's Homepage The blog Math with Bad Drawings recently featured an article about Ultimate Tic Tac Toe, a variant of Tic Tac Toe where each of the nine fields is a separate game of Tic Tac Toe. To mark a field of the large game as your, you have to win the small game therein. If you chose a field in the small game, this position determines the small field that the other play may play next. See the linked article for a full explanation. As far as I know, the question of who wins this game was open; at least nothing definite was known on Hacker News or on the Board Games StackExchange site. We discussed this a bit in our office, and my coworker Denis Lohner came up with what seems to be a winning strategy.

How to Set Up Your Own Remote Home Monitoring System Ever wish you could use your tech to keep an eye on your home while you're gone? Well, you can--and you don’t need an expensive, dedicated setup. All you need is a webcam. In this how-to package, we'll show you how to use your everyday tech to set up a motion-detecting camera in your house, so you can keep an eye out for intruders, mischievous pets, or even roommates with a weakness for the contents of your snack drawer. This Augmented-Reality Sandbox Turns Dirt Into a UI Developed by a team of researchers at UC Davis, these augmented-reality sandboxes let kids learn while getting their hands dirty. Photo: Rhys George We’ve seen how kids take to touchscreens. To them, our unfathomably sophisticated smartphones and tablets are about as hard to figure out as a bucket full of blocks. It’s a little bit eerie, watching a youngster prod his or her way around an iPad; it makes you wonder if future generations will ever have a chance to foster any of the skepticism we feel towards cyborg enhancements and brain implants and other unsavory flavors of invasive, singularity-style computing.

Pacxon - Online Game Additional Information: Use Pacman to capture sections of the board in Pacxon. Clear 80% to progress to the next level. Pacxon is the most popular game on the whole site! Pacxon is the most popular game on the site. It's a classic combination of retro arcade games Pacman and Xonix. Stac - An abstract game in a bag by Simple Design Publishing Risks and challenges Being as this is my first Kickstarter campaign, I'll be truly learning how crowdfunding works as this project moves along. To mitigate the risks involved, I've done extensive research into how to properly run a campaign by reading everything I can.

Snackbot - The Internet Connected Candy Machine Step 1: Parts & Supplies To complete this project, you are going to need the following: • 1 x Brookstone SnackMan™ • 1 x Part Bundle (includes 1 each of Electric Imp Card, April Breakout Board, NFET, Diode, 10KΩ (or higher) resistor) You are also going to need some tools: • Philips Screwdriver • Soldering Iron • Solder • Foam Tape (or other adhesive) • An iPhone or Android Phone Step 2: Disassembly The first thing we need to do is disassemble the SnackMan. We're going to take out (almost) all of the electronics, and replace them with an April board, and the NFET.