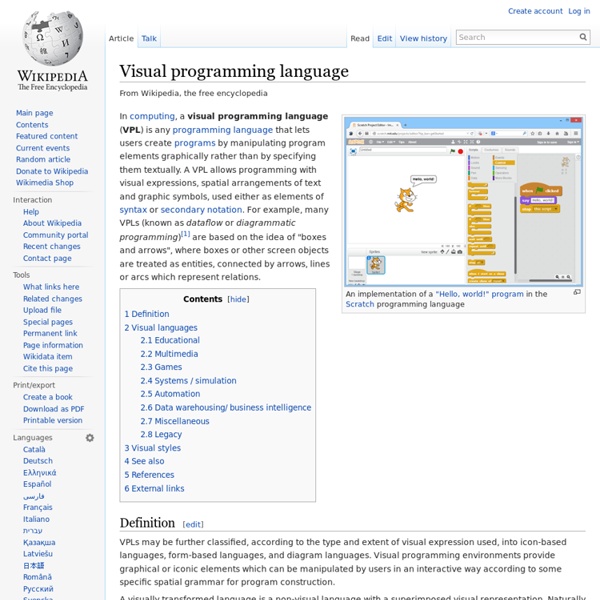 In computing, a visual programming language (VPL) is any programming language that lets users create programs by manipulating program elements graphically rather than by specifying them textually. A VPL allows programming with visual expressions, spatial arrangements of text and graphic symbols, used either as elements of syntax or secondary notation. For example, many VPLs (known as dataflow or diagrammatic programming)[1] are based on the idea of "boxes and arrows", where boxes or other screen objects are treated as entities, connected by arrows, lines or arcs which represent relations. Definition[edit] VPLs may be further classified, according to the type and extent of visual expression used, into icon-based languages, form-based languages, and diagram languages. Visual programming environments provide graphical or iconic elements which can be manipulated by users in an interactive way according to some specific spatial grammar for program construction. Visual languages[edit]

Prolog Prolog is a general purpose logic programming language associated with artificial intelligence and computational linguistics.[1][2][3] Prolog has its roots in first-order logic, a formal logic, and unlike many other programming languages, Prolog is declarative: the program logic is expressed in terms of relations, represented as facts and rules. A computation is initiated by running a query over these relations.[4] The language was first conceived by a group around Alain Colmerauer in Marseille, France, in the early 1970s and the first Prolog system was developed in 1972 by Colmerauer with Philippe Roussel.[5][6] Prolog was one of the first logic programming languages,[7] and remains the most popular among such languages today, with many free and commercial implementations available. Prolog is well-suited for specific tasks that benefit from rule-based logical queries such as databases searching, voice control systems, and template filling. §Syntax and semantics[edit] §Data types[edit] ? ? ? ?

Scriptius: Automate your work and save your time! FAQ - Blockly What is Blockly? Blockly is a visual editor that allows users to write programs by plugging blocks together. Developers can integrate the Blockly editor into their own web applications to create a great UI for novice users. A user might create a program like this: Then Blockly would generate the corresponding code in JavaScript, Python, PHP, Dart, or some other language: if (Count > 256) { Count = 0; alert("Game Over");} The application can then execute the code as desired. Can I use Blockly to teach programming to my child? Blockly is a tool for application developers, it is not a tool for children. How does Blockly relate to Scratch, App Inventor, etc.? Blockly was influenced by App Inventor, which in turn was influenced by Scratch, which in turn was influenced by StarLogo. However, Blockly was designed with developers as the primary audience. Why are graphics better than text? Additionally, many non-programmers find a blank screen with a blinking cursor to be daunting.

pyc/weblog» Blog Archive » node graph Having looked at other alternatives (i.e. html5 canvas, ajax, js with framwork), Flash wtih as3 is chosen for the UI for I have some experience with it a while back, also it has the ability to communicate with javascript and be embeded on web as well as standalone exe. From what I know there is no readily available framework/library. After seeing such progressive UI (as some would call) imbued in many of the current 3d applications (i.e. grasshopper, houdini, maya and max), I have decided to start this personal project to explore the inner workings of node graphs in general by making one as a script editor for maya (through as3 native socket or python socket as cgi) and possibly sketchup (through ruby webdialog to javascript to as3) Node graph is nothing new as a data visualisation tool or program extension.

OPS5 The OPS (said to be short for "Official Production System") family was developed in the late 1970s by Charles Forgy while at Carnegie Mellon University. Allen Newell's research group in artificial intelligence had been working on production systems for some time, but Forgy's implementation, based on his Rete algorithm, was especially efficient, sufficiently so that it was possible to scale up to larger problems involving hundreds or thousands of rules. OPS5 uses a forward chaining inference engine; programs execute by scanning "working memory elements" (which are vaguely object-like, with classes and attributes) looking for matches with the rules in "production memory". In this sense, OPS5 is an execution engine for a Petri net extended with inhibitor arcs. The OPS5 forward chaining process makes it extremely parallelizeable during the matching phase, and several automatic parallelizing compilers were created. OPS4 was an early version, while OPS83 came later. References[edit]

Pharmacology - Basic LSD Pharmacology: How Does LSD Work? How does LSD work? LSD, due to its monoamine-like structure, primarily acts as an agonist of serotonin (5-HT) receptor proteins. More specifically, the psychedelic effects of LSD are attributed to it’s ability to activate the g-protein coupled (metabotropic) 5-HT-2A/2C receptors. Activation of these receptors results in the release of α, β, and δ g-protein subunits resulting from a conformational change in the receptor, which results in an exchange of GDP for GTP. Additionally, LSD acts as an agonist at a slew of other 5-HT receptors (5-HT-1A/1B/1D, 5-HT-2A/2C, 5-HT-5A, 5-HT-6 and 5-HT-7) as well as the D1 & D2 Dopamine (DA) receptors, and the α1 and α2-adrenergic receptors. In the pre-frontal cortex (PFC), 5-HT-2A receptors are primarily localized in deep layer IV and layer V dendritic spines of pyramidal cells and interneurons, areas which have been implicated in the management of attention and consciousness. Visual Dopamine SSRIs and 5-HTP Side effects Potency Synesthesia