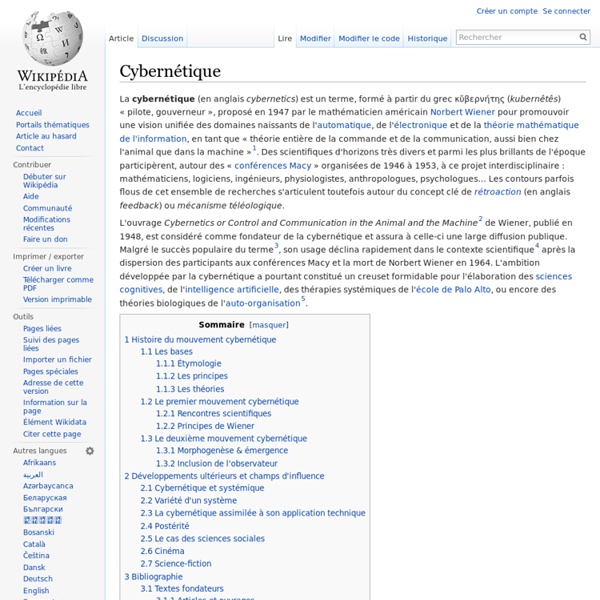 Von Neumann architecture computer architecture where code and data share a common bus A von Neumann architecture scheme The von Neumann architecture—also known as the von Neumann model or Princeton architecture—is a computer architecture based on a 1945 description by John von Neumann and others in the First Draft of a Report on the EDVAC.[1] That document describes a design architecture for an electronic digital computer with these components: Gregory Bateson Gregory Bateson (9 May 1904 – 4 July 1980) was an English anthropologist, social scientist, linguist, visual anthropologist, semiotician, and cyberneticist whose work intersected that of many other fields. In the 1940s, he helped extend systems theory and cybernetics to the social and behavioral sciences. He spent the last decade of his life developing a "meta-science" of epistemology to bring together the various early forms of systems theory developing in different fields of science.[2] His writings include Steps to an Ecology of Mind (1972) and Mind and Nature (1979). Angels Fear (published posthumously in 1987) was co-authored by his daughter Mary Catherine Bateson. Bateson was born in Grantchester in Cambridgeshire, England, on 9 May 1904.

Company: Time Magazine Names the XOS 2 Exoskeleton "Most Awesomest" Invention of 2010 Last updated: 10/27/2011* Raytheon’s second-generation exoskeleton (XOS 2), essentially a wearable robotics suit, has been named one of the Best Inventions of 2010 by Time Magazine . The suit was unveiled for the first time in September during an event at the company’s Salt Lake City research facility. How Ada Lovelace, Lord Byron’s Daughter, Became the World’s First Computer Programmer Augusta Ada King, Countess of Lovelace, born Augusta Ada Byron on December 10, 1815, later came to be known simply as Ada Lovelace. Today, she is celebrated as the world’s first computer programmer — the first person to marry the mathematical capabilities of computational machines with the poetic possibilities of symbolic logic applied with imagination. This peculiar combination was the product of Ada’s equally peculiar — and in many ways trying — parenting. Eleven months before her birth, her father, the great Romantic poet and scandalous playboy Lord Byron, had reluctantly married her mother, Annabella Milbanke, a reserved and mathematically gifted young woman from a wealthy family — reluctantly, because Byron saw in Annabella less a romantic prospect than a hedge against his own dangerous passions, which had carried him along a conveyer belt of indiscriminate affairs with both men and women. Ada was never to meet her father, who died in Greece the age of thirty-six. Ada was eight.

Reality therapy Reality therapy (RT) is an approach to psychotherapy and counseling. Developed by William Glasser in the 1960s, RT differs from conventional psychiatry, psychoanalysis and medical model schools of psychotherapy in that it focuses on what Glasser calls psychiatry's three Rs: realism, responsibility, and right-and-wrong, rather than symptoms of mental disorders.[1] Reality therapy maintains that the individual is suffering from a socially universal human condition rather than a mental illness. It is in the unsuccessful attainment of basic needs that a person's behavior moves away from the norm.

Lockheed Martin HULC Exo-Skeleton Prepares To Smash Human Beta Tests The HULC exo-skeleton, Lockheed Martin’s prototype heavy lifter for infantry troops in the field, has its battery and is now ready for human trials. If they’re successful, field tests could be close on their heels. A quick primer though, before anything else: HULC, or Human Universal Load Carrier, could be the military’s answer for troops who need to carry heavy loads—in this case 200 pounds—in the field of battle. It’s been in R&D for a while, only recently had its battery finalised, and today is preparing to enter the first of a series of serious $US1.1 million biomechanical tests that could very well decide if this ever sees the field, or combat, in a few years’ time Reports Danger Room: “Biomechanical testing will measure the energy expended by a soldier when using the HULC,” according to a Lockheed statement. “The laboratory testing will also assess how quickly users learn to use the HULC system when carrying various loads and moving at various speeds.

Connection Machine Thinking Machines CM-2 at the Computer History Museum in Mountain View, California. One of the face plates has been partially removed to show the circuit boards inside. The Connection Machines were a series of supercomputers that grew out of Danny Hillis's doctoral research at MIT in the early 1980s on alternatives to the traditional von Neumann architecture of computation. The Connection Machines (CMs), beginning with CM-1, were originally intended for applications in artificial intelligence and symbolic processing, but later versions found greater success in the field of computational science. Origin of idea[edit] Danny Hillis and Sheryl Handler founded Thinking Machines (TMC) in Waltham, Massachusetts in 1983, later moving it to Cambridge, MA.

Rational emotive behavior therapy Rational emotive behavior therapy (REBT), previously called rational therapy and rational emotive therapy, is an active-directive, philosophically and empirically based psychotherapy, the aim of which is to resolve emotional and behavioral problems and disturbances and to help people to lead happier and more fulfilling lives.[1][2] REBT was created and developed by the American psychotherapist and psychologist Albert Ellis, who was inspired by many of the teachings of Asian, Greek, Roman and modern philosophers.[3][4] REBT is the first form of cognitive behavioral therapy (CBT) and was first expounded by Ellis in the mid-1950s; development continued until his death in 2007.[5][6][7] Ellis became synonymous with the highly influential therapy. Psychology Today noted, "No individual—not even Freud himself—has had a greater impact on modern psychotherapy.[8] History[edit] Theoretical assumptions[edit] Where the following letters represent the following meanings in this model:

How Ada Lovelace and Charles Babbage Invented the World’s First Computer: An Illustrated Adventure in Footnotes and Friendship In 1843, Ada Lovelace — the only legitimate child of the poet Lord Byron — translated a scientific paper by Italian military engineer Luigi Menabrea titled Sketch of an Analytical Engine, adding seven footnotes to it. Together, they measured 65 pages — two and half times the length of Menabrea’s original text — and included the earliest complete computer program, becoming the first true paper on computer science and rendering Lovelace the world’s first computer programmer. She was twenty-seven. About a decade earlier, Lovelace had met the brilliant and eccentric British mathematician Charles Babbage who, when he wasn’t busy teaming up with Dickens to wage a war on street music, was working on strange inventions that would one day prompt posterity to call him the father of the computer. (Well, sort of.)

Challenging Coaching Is there anything beyond self-actualisation? According to Maslow’s 1943 hierarchy of needs, self-actualisation was the pinnacle of his 5 level model of motivation. However, late in his life, Maslow described intrinsic values as a sixth level. Hazel Skelsey Guest wrote in the British Psychology Society Journal ‘The Psychologist’ December 2014 about Maslow’s lesser-known sixth level. What does this mean for personal development and coaching people to achieve their full potential?