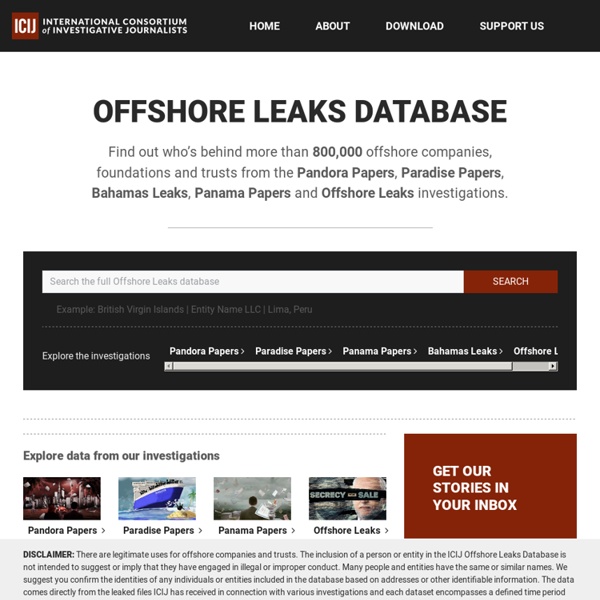 City of London wants to create a new African tax haven From Kenya’s Standard (hat tip Martin Kirk) Nairobi’s vision of following the footsteps of London, and becoming a global financial centre, has started taking shape with a financial firm appointed to deliver the work — TheCityUK — seeking partners to participate in the development of the project. Let’s see. Who is TheCityUK? Well, on their “Who we are” page, we have: Database of radiological incidents and related events compiled by Wm. Robert Johnston last modified 20 January 2014 Contents Introduction: This database is a compilation of general data on radiological accidents/incidents and other events which have produced radiation casualties. Listed events include:

BBC - Today Sometime in mid-July 1518, in the city of Strasbourg, a woman stepped into the street and started to dance. She was still dancing several days later. Within a week about 100 people had been consumed by the same irresistible urge to dance. How secret offshore firms feed London's property boom The UK is increasingly turning into a property speculators' haven, thanks to tax loopholes and the offshore secrecy offered by the British Virgin Islands (BVI) that hides many property transactions. We disclose the identities of some of the people secretly buying up Britain. The Guardian's investigation with the Washington-based International Consortium of Investigative Journalists (ICIJ), covering nearly 60 sample premises, shows how anonymous buyers are taking over more and more blocks of luxury housing.

Exhaustive Study Finds Global Elite Hiding Up to $32 Trillion in Offshore Accounts Guests James Henry economist, lawyer, board member of the Tax Justice Network, and author of the report, "The Price of Offshore Revisited." He is former chief economist at McKinsey & Company. $21tn: hoard hidden from taxman by global elite A global super-rich elite has exploited gaps in cross-border tax rules to hide an extraordinary £13 trillion ($21tn) of wealth offshore – as much as the American and Japanese GDPs put together – according to research commissioned by the campaign group Tax Justice Network. James Henry, former chief economist at consultancy McKinsey and an expert on tax havens, has compiled the most detailed estimates yet of the size of the offshore economy in a new report, The Price of Offshore Revisited, released exclusively to the Observer. He shows that at least £13tn – perhaps up to £20tn – has leaked out of scores of countries into secretive jurisdictions such as Switzerland and the Cayman Islands with the help of private banks, which vie to attract the assets of so-called high net-worth individuals.

The China Study The China Study is a book by T. Colin Campbell, Jacob Gould Schurman Professor Emeritus of Nutritional Biochemistry at Cornell University, and his son Thomas M. Campbell II, a physician. It was first published in the United States in January 2005 and had sold over one million copies as of October 2013, making it one of America's best-selling books about nutrition.[2] The China Study examines the relationship between the consumption of animal products (including dairy) and chronic illnesses such as coronary heart disease, diabetes, and cancers of the breast, prostate and bowel.[3] The authors conclude that people who eat a whole-food, plant-based/vegan diet—avoiding all animal products, including beef, pork, poultry, fish, eggs, cheese and milk, and reducing their intake of processed foods and refined carbohydrates—will escape, reduce or reverse the development of numerous diseases.

6 Whopping Government Misstatements About NSA Spying Sen. Dianne Feinstein (D-California) and chair of the Senate Intelligence Committee, is among many government officials uttering misstatements in the wake of the Edward Snowden NSA leaks. Photo: Jacquelyn Martin/AP A scheme designed to net trillions from global tax havens is being scuppered British Virgin Islands, a tax haven. The UK is said to be working with the Swiss to frustrate global transparency on taxation. Photograph: Neil Rabinowitz/Corbis The world is seeing the first stirrings of an emerging new architecture of global transparency in taxation which could, if pushed forwards, help governments for the first time raise serious revenues from the estimated $21-32 trillion sitting offshore.

Tax haven There is no generally accepted definition of what a tax haven is, but activities that are commonly associated with such places range far beyond tax. Some definitions do focus purely on tax: for example, a widely cited academic paper describes a tax haven as a jurisdiction where particular taxes, such as an inheritance tax or income tax, are levied at a low rate or not at all.[1] Other definitions refer to a state, country, or territory which maintains a system of financial secrecy, which enables foreign individuals to hide assets or income to avoid or reduce taxes in the home jurisdiction. Some refer to "secrecy jurisdictions" as an alternative to "tax havens," to emphasise the secrecy element, and a Financial Secrecy Index ranks jurisdictions according to their size and secrecy. [2]

Top six alkaline foods to eat every day for vibrant health Share by Angela Doss The typical American diet is a deadly one, consisting primarily of toxic and acid-forming foods like processed sugars, artificial sweeteners, refined grains, conventionally produced meats and dairy, and hidden genetically modified organisms. The offshore trick: how BVI 'nominee director' system works Nominee directors are not illegal and can sometimes be useful, for example in preparing "off-the-shelf" ready-made companies. But the legal conjuring trick behind the British Virgin Islands nominee system opens the way to abuses. It depends on three pieces of paper: 1. 31 Maps Mocking National Stereotypes Around the World Using infographical maps to represent data is nothing new, but London-based designer Yanko Tsvetkov, through his site alphadesigner.com, has taken this common form in a new direction by releasing a series of both funny and thought-provoking prejudice maps. Instead of displaying political borders or statistics, his maps make tongue-in-cheek representations of social, cultural and political stereotypes. [Read more...] The stereotype maps label nations and geographical regions by the stereotypes through which they are perceived by the map’s primary subject. The labels he uses touch on everything from political concerns, like the development of the European Union, to cultural stereotypes, like the Hellenocentric view that Greece gave Europe its culture. The U.S.A’s map labels Russia as a communist stronghold, while Britain’s map labels Ireland as an island full of rascals.

Sham directors: the woman running 1,200 companies from a Caribbean rock At the age of 38, Bradford-born Sarah Petre-Mears is running one of the biggest business empires on earth. Or so it would appear. Official records show her controlling more than 1,200 companies across the Caribbean, the Republic of Ireland, New Zealand and the UK itself. Her business partner, Edward Petre-Mears, is listed as a director of at least a further 1,000 international firms. But the true headquarters of this major businesswoman remains mysterious.