5 Keys to Inspiring Leadership, No Matter Your Style 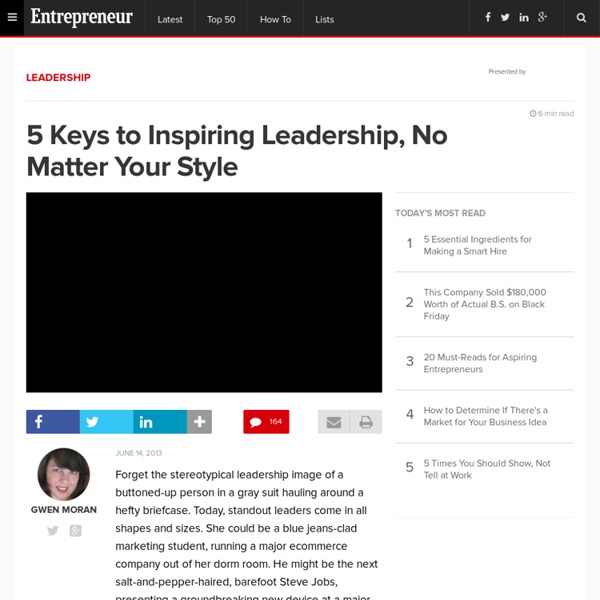 Forget the stereotypical leadership image of a buttoned-up person in a gray suit hauling around a hefty briefcase. Today, standout leaders come in all shapes and sizes. She could be a blue jeans-clad marketing student, running a major ecommerce company out of her dorm room. He might be the next salt-and-pepper-haired, barefoot Steve Jobs, presenting a groundbreaking new device at a major industry conference. "Our research indicates that what really matters is that leaders are able to create enthusiasm, empower their people, instill confidence and be inspiring to the people around them," says Peter Handal, chief executive of New York City-based Dale Carnegie Training, a leadership-training company. That's a tall order. 1. Great leaders are brave enough to face up to challenging situations and deal with them honestly. "The gossip at the coffee machine is usually 10 times worse than reality," Handal says. 2. 3. If you're not a suit, don't try to be one. 4. 5. The 5 Keys Series Related:  Teaching methods

20 Places to Educate Yourself Online for Free It seems like these days you can learn just about anything online for free, but of course some of that information is better than others. The good news is there are plenty of reputable places to educate yourself online for free, and here’s a good 20 of them to get you started. 1. The coolest thing about Internet learning is that you can take college courses which in the past were only available to people who forked over immense sums of money to attend elite colleges. Courses typically include videos and certain coursework (such as online quizzes) that must be completed in a certain amount of time, as these courses are monitored by a professor. 2. Home to more than 3,000 videos on subjects ranging from SAT prep to cosmology, art history to calculus, Khan Academy is a great place to learn. You can also leave comments or ask questions if you want more information or if something isn’t clear in the lessons. 3. 5. 6. 7. 8. 9. 10. iTunes U Love videos by experts on all sorts of topics? 13. 14.

7 Key Characteristics Of Better Learning Feedback 7 Key Characteristics Of Better Learning Feedback by Grant Wiggins, Authentic Education On May 26, 2015, Grant Wiggins passed away. Grant was tremendously influential on TeachThought’s approach to education, and we were lucky enough for him to contribute his content to our site. Whether or not the feedback is just “there” to be grasped or offered by another person, all the examples highlight seven key characteristics of helpful feedback. Helpful feedback is – Goal-referencedTransparentActionableUser-friendlyTimelyOngoingConsistent 1. Given a desired outcome, feedback is what tells me if I should continue on or change course. Note that goals (and the criteria for them) are often implicit in everyday situations. 2. Even as little pre-school children, we learn from such results and models without adult intervention. Far too much educational feedback is opaque, alas, as revealed in a true story told to me years ago by a young teacher. 3. Thus, “good job!” 4. 5. 6. 7. References

Digital Is At Rose High School, located in eastern North Carolina and populated by students on extreme ends of the socioeconomic spectrum, we have students who are passionate and active about everything from establishing a witty presence on social media to saving orphans in Darfur, but these are often extracurricular activities that don't show up in the actual classroom. Students might spend hours posting selfies on Facebook or hours planning a benefit concert, but when they feel like they have to put on their academic persona, they tend to forget those parts of themselves. I wanted students to be able to funnel their interests into a more authentic academic experience so that they could learn about what they want to learn about and become empowered as researchers, both casually and formally. To do that, I needed to remix their idea of what research is, transform it from something boring and arbitrary into something rich and useful. When I don't know something, I look it up.

The Role Of Empathy In Learning The Role Of Empathy In Learning Learning has to starts and end with the self: What do I know, and how can I relate to the world around me? If successful it should, by design, result in personal and social change through a combination of self-direction, reflection, and collaboration with ideas and the people who have them. Which brings us to empathy. The role of empathy in learning has to do with the flow of both information and creativity. Empathy and outrospection are tools not simply of emotional interdependence, but “radical social change.” How might you frame tomorrow’s lesson or your next project-based learning unit if you want the student to seamlessly transition between other perspectives and their own? The Role Of Empathy In Learning

Connected Education Might Not Mean What You Think - Finding Common Ground This month has been designated "Connected Educator" Month by the U.S Department of Education. Most of us who considered ourselves connected educators write about technology and social networking frequently, or at least during months other than one designated for connected learning. That kind of speaks to how we all feel about technology. Not because technology is the flavor of the month but because it literally has enhanced every aspect of our job. For the past few years I have expanded my professional learning network (PLN) through Twitter. Social networking has numerous chat sessions where we engage in debate or collaborate on ideas. The Downside I'm not going to lie, there are parts that I dislike about technology. I have actually asked my staff not to read e-mails after a certain time at night. I still like to pick up the phone or walk down the hall to have a real conversation. Mid-Life Career Change Blogging has been a life changing experience for some people. In the End

The Complete Visual Guide To Technology For Children Technology in education isn’t just for older students. There are a ton of resources out there for early childhood educators and their students, and many young children are already able to use the technology available to them. They’re even calling today’s preschoolers “Generation C”, aka the connected generation. In years past, parents were supposed to prepare their young students for kindergarten so that they would be well equipped to start their formal education. The handy infographic below takes a look at all of the issues surrounding technology for children. Technology For Children Today’s youngest students are expected to already have some technical know-how. Stats On Technology Use By Young Children Technology Addiction Is Real Children as young as four have been treated for technology addiction. Guidelines For Healthy Technology Use How can parents and teachers help children unplug?

How a Radical New Teaching Method Could Unleash a Generation of Geniuses | Wired Business In 2009, scientists from the University of Louisville and MIT's Department of Brain and Cognitive Sciences conducted a study of 48 children between the ages of 3 and 6. The kids were presented with a toy that could squeak, play notes, and reflect images, among other things. For one set of children, a researcher demonstrated a single attribute and then let them play with the toy. Gopnik's research is informed in part by advances in artificial intelligence. A Brief History of Alternative Schools New research shows what educators have long intuited: Letting kids pursue their own interests sharpens their hunger for knowledge. 470 BC Socrates is born in Athens. 1907 Maria Montessori opens her first Children's House in Rome, where kids are encouraged to play and teach themselves. 1919The first Waldorf school opens in Stuttgart, Germany. 1921A. 1945Loris Malaguzzi vol­unteers to teach in a school that parents are building in a war-torn Italian village outside Reggio Emilia.

Howard Gardner: ‘Multiple intelligences’ are not ‘learning styles’ The fields of psychology and education were revolutionized 30 years ago when the now world-renowned psychologist Howard Gardner published his 1983 book Frames of Mind: The Theory of Multiple Intelligences,” which detailed a new model of human intelligence that went beyond the traditional view that there was a single kind that could be measured by standardized tests. (You can read his account of how he came up with the theory here.) Gardner’s theory initially listed seven intelligences which work together: linguistic, logical-mathematical, musical, bodily-kinesthetic, spatial, interpersonal and intrapersonal; he later added an eighth, naturalist intelligence and says there may be a few more. Gardner now teaches at the Harvard Graduate School of Education. By Howard Gardner It’s been 30 years since I developed the notion of “multiple intelligences.” First a word about “MI theory.” Two problems. Problem #2. Here’s my considered judgment about the best way to parse this lexical terrain: 1.