The Enneagram is Astrology! 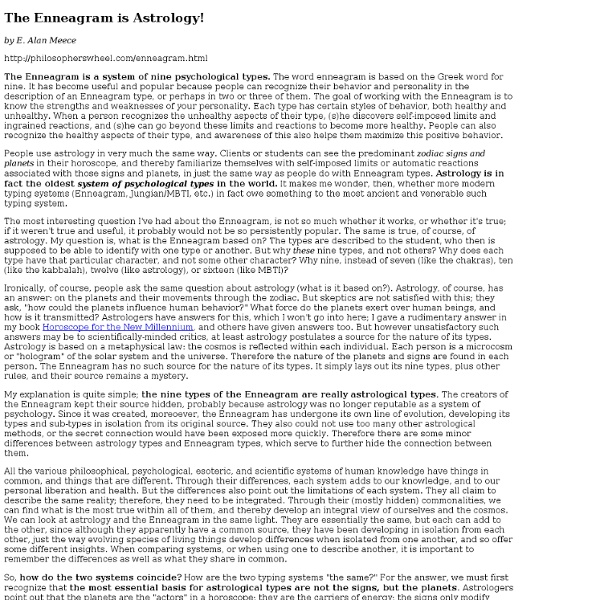 by E. Alan Meece The Enneagram is a system of nine psychological types. The word enneagram is based on the Greek word for nine. It has become useful and popular because people can recognize their behavior and personality in the description of an Enneagram type, or perhaps in two or three of them. The goal of working with the Enneagram is to know the strengths and weaknesses of your personality. People use astrology in very much the same way. The most interesting question I've had about the Enneagram, is not so much whether it works, or whether it's true; if it weren't true and useful, it probably would not be so persistently popular. Ironically, of course, people ask the same question about astrology (what is it based on?). My explanation is quite simple; the nine types of the Enneagram are really astrological types. All the various philosophical, psychological, esoteric, and scientific systems of human knowledge have things in common, and things that are different. Type One is Mercury

The Galactic Center It's true, Pluto now aligns with the Galactic Center and will through all of 2007 and 2008. Following is an excerpt from The Soul of the Sky, one of the many components of my Galactic Trilogy CD. This article is copyrighted and may be used for classes and handouts, but it may NOT be posted on other websites. Astrology Love and Sex Secrets - Venus and Mars We can learn a lot about ourselves and others through an exploration of positions, placements, and aspects in astrology birth (natal) charts. Love and sex are areas of our lives that intrigue us all. There are specific things to look for in astrology that will help shed light on individual temperaments, preferences, and styles. At Cafe Astrology, we offer a wide variety of articles on these highly charged topics: Venus:

Ancient earthwork bordering England and Wales is older than previously thought Ancient Origins seeks to uncover, what we believe, is one of the most important pieces of knowledge we can acquire as human beings – our beginnings. While many believe that we already hold such knowledge, our view is that there still exists a multitude of anomalies and mysteries in humanity's past that deserve further examination. We therefore wish to foster an open community that is dedicated to investigating, understanding and explaining the origins of our species on planet earth. To this end, we aim to organize, support and even finance efforts in this direction. Our aim is to move beyond theories and to present a thorough examination of current research and evidence and to offer alternative viewpoints and explanations to those currently held by mainstream science and archaeology.

Astrology Dictionary B and C An aspect configuration consisting of two planets in an opposition aspect. There are two more planets, each forming a trine aspect to one side of the opposition and a sextile to the other. In effect, there are two Wedge configurations. In a Wedge, the apex planet (that trines and sextiles the opposed planets) provides a release or relief point for the stress of the opposition. The apex planet can be a source of great creativity that channels the stress into positive, constructive activity, although the stress of the opposition may or may not finally be resolved by this. The apex can also be a place of escapism where the stress is simply avoided and never resolved.

Mexican archaeologists unearth ancient 1,100-year-old burial chamber Archaeologists have discovered an ancient 1,100-year-old burial chamber at the archeological site of Atzompa, in the Mexican state of Oaxaca. The funerary complex, consisting of three burial chambers, is different from the previously discovered finds in the region. It was located inside a building designed exclusively to house a series of tombs placed vertically, one above another, and unlike the ones found so far, they are not underground, according to the National Institute of Anthropology and History. REUTERS/INAH/HandoutA view of the building (top) where archeologists found a burial chamber at the archeological site of Atzompa.

Tools of Esoteric Astrology Patrick Mulcahy The Three Divine Currents My understanding (at this time) is that the evolutionary movement of collective Humanity is, symbolically speaking, anti-clockwise around the circle of the Tropical zodiac - from Aries to Pisces. (See the article: Seed-Tree-Fruit.)

Books in Category Astrology And Geomancy The Kabala Of Numbers by Sepharial The science of numbers is of remotest antiquity. Among the Aryans and Greeks, the Assyrians and Egyptians, we find indications of a development which gave to numbers their real significance and employed them in a system of symbolism which had respect to something more than mere enumeration.While it... >>Download<< Manual Of Occultism Scanned Version by Sepharial This author is known world wide for his books on astrology and occultism. 'OBJECT' FOUND BURIED UNDER ANTARCTIC ICE CAP, COULD BE OF ALIEN ORIGIN AND CAUSE OF TIME VORTEX, FEDS DENY EVERYTHING Disturbing news has been leaking out from the giant continent at the bottom of the world. Some scientists manning lonely outposts under the drifting and shifting aurora are nearly paralyzed with fear. Their clipped reports are being reviewed by astonished superiors back in the home countries. Russian researchers posted near the giant South Pole sub-glacial Lake Vostok have reported eerie anomalies and incidents over the past few years that sometimes seem to border on the frayed edge of creeping madness.