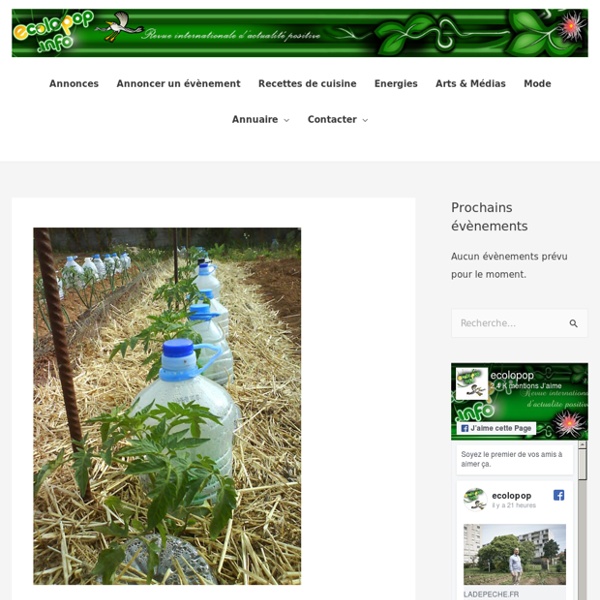 China built a giant solar field in a desert Deserts don’t exactly have the best rep for me. They inspire images of horrific sunburns and dying of thirst – and at best, some sweet cacti, grand sandcastle visions, or a certain noseless Egyptian monument. But the ante has officially been upped: Travel to Dunhuang in northwestern China’s Gansu province and you’ll stumble across a massive field of solar panels in the Gobi Desert. The province has been building up the field since 2009. But from 2012 to March 2015, the construction project exploded in size and “the area occupied by the photovoltaic panels has expanded threefold,” iO9 reports. Just take a look at the comparison below:

Soda Bottle Drip Feeder for Vegetables - Easy DIY project Drip feeders are a great idea for vegetable gardening projects. Many plants prefer the moisture at their roots instead of from overhead sprinklers which can encourage some leaf problems. There are many retail products available, but this Soda Bottle Drip Feeder makes use or recycled materials and works really well. It is not just vegetables that will benefit from this project. How a Plastic-Eating Caterpillar Could Help Solve the World’s Waste Crisis Scientists are learning more about a caterpillar that is very hungry …. for plastics! The plastic-munching abilities of the greater wax moth caterpillar were first discovered in 2017, when a scientist and amateur beekeeper put some of the insects, who also eat beeswax, into a plastic bag only to discover that they had eaten their way out. Now, researchers at the University of Brandon have discovered that the larval greater wax moths can survive solely on polyethylene — the type of plastic that makes grocery shopping bags. "They are voracious feeders during these larval stages," lead study author and Brandon University associate biology professor Bryan Cassone told USA TODAY.

KAPAGEN, the Tariel Kapanadze's generator KAPAGEN, the Tariel Kapanadze's generatorby Jean-Louis Naudincreated on may 28, 2010 - JLN Labs - Last update July 5, 2010Toutes les informations et schémas sont publiés gratuitement ( freeware ) et sont destinés à un usage personnel et non commercialAll informations and diagrams are published freely (freeware) and are intended for a private use and a non commercial use. The purpose of these series of experiments is to try to understand the working principle of the Tariel Kapanadze generator presented in his demo video and also to share in realtime the results of my findings through this web page. My current Kapanadze generator v3.2 is only an attempt of replication of the Tariel's original device based on the Nikola Tesla fuelless generator. Due to the presence of High Voltage and the High Power output of the Kapagen, users of this document should be very carefull and experienced in High-Voltage electronics to try anything out !

Solar is mostly for the wealthy. Here’s how Obama plans to change that This story is reproduced here as part of the Climate Desk collaboration. Rooftop solar power systems cost a lot less these days than they did five or 10 years ago, and with many solar companies now offering leases and loans, it’s safe to say that going solar is more affordable than ever before. That trend goes a long way to explaining why solar, while still making up less than 1 percent of the total U.S. energy mix, is the fastest-growing power source in the country. How To Build An Epic Self-Watering Garden – REALfarmacy.com Wicking Garden: “A wicking bed is a garden bed with a waterproof lining that holds a reservoir of water at the bottom from which water is draw upwards like a wick to the surface of the bed via natural soil osmosis or through the roots of plants in the bed. Basically it works like large Decor self-watering pot.” A reference diagram to help understand the concepts of a wicking garden The wicking garden is an amazingly effective and simple to build gardening system.

sans titre David Vaughan at the Mote Laboratory is growing coral 40 times faster than in the wild.It typically takes coral 25 to 75 years to reach sexual maturity. With a new coral fragmentation method, it takes just 3.Scientists and conservationists plan to plant 100,000 pieces of coral around the Florida Reef Tract by 2019 and millions more around the world in the years to come. The news has not been encouraging as of late if you are one to pay attention to either climate change or The Great Barrier Reef: coral reefs are an incubator of the ocean's ecosystem. They account for less than 1% of the ocean and yet manage to provide food and shelter to over one quarter of all marine species in the ocean, as well as support fish that ultimately feed over one billion people.

Reed Bed System & Composting Toilets One of the characteristics that separates 21st century homo sapiens from the other species with which we share the planet is that we relentlessly take from the natural world but seldom give back. The flawed economic system by which we imagine we sustain our lives places a commercial value on the planet’s resources but not an ecological one. It is almost a cliché now to say that when we throw our waste away, there actually is no away but only someone else’s door step or some other life form’s habitat. But raised awareness does not seem to have reduced our disposable habits.

Apple to spend $850 million on solar energy This story was reproduced here as part of the Climate Desk collaboration. On Tuesday, Apple CEO Tim Cook announced a massive new investment by the company in solar energy: an $850 million installation that will cover 1,300 acres in Monterey County, Calif. Apple is partnering with First Solar — the nation’s biggest utility-scale installer — on the project, which will produce enough power to supply 60,000 California homes, Cook said. According to a press release from First Solar, Apple will receive 130 megawatts from the project under a 25-year deal, which the release describes as the largest such agreement ever. Cook called it Apple’s “biggest, boldest and most ambitious” energy project to date, designed to offset the electricity needs of Apple’s new campus, the futuristic circular building designed by Norman Foster, and all of Apple’s California retail stores. “We know at Apple that climate change is real,” he said.

Element Eco-Design Save Water with Wicking Beds - Element Eco-Design We just finished installing five big and beautiful Wicking Beds for a client in Salmon Arm. These water smart raised beds were designed extra tall with a false bottom to reduce the need for bending over while the clients tend their veggies. So what are Wicking beds you ask? Wicking beds are a great way to capture and store rain water to irrigate your raised beds from below the soil as they can be filled with a hose or connected right to your downspout. Wicking beds are raised beds with waterproof reservoir in the bottom 2/3 of the bed. The bed has a perforated pipe installed in the bottom of the bed, this pipe is covered with a fine gravel up to 10” deep.

Google Rattles the Tech World With a New AI Chip for All In a move that could shift the course of multiple technology markets, Google will soon launch a cloud computing service that provides exclusive access to a new kind of artificial-intelligence chip designed by its own engineers. CEO Sundar Pichai revealed the new chip and service this morning in Silicon Valley during his keynote at Google I/O, the company’s annual developer conference. This new processor is a unique creation designed to both train and execute deep neural networks—machine learning systems behind the rapid evolution of everything from image and speech recognition to automated translation to robotics. Google says it will not sell the chip directly to others. Instead, through its new cloud service, set to arrive sometime before the end of the year, any business or developer can build and operate software via the internet that taps into hundreds and perhaps thousands of these processors, all packed into Google data centers. The Sequel