10 Things Garry Winogrand Can Teach You About Street Photography 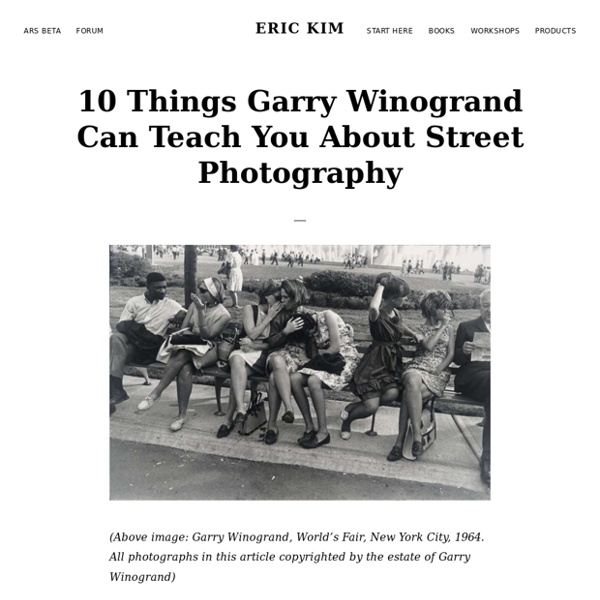 10 Famous Street Photography Quotes You Must Know (Above image by Garry Winogrand) If you want to get a deeper insight into street photography and take better photos, I feel it is very important to study the work of the street photographers who came before us and paved the way for the rest of us. Not only that, but reading the quotes and words by these influential street photographers is a great way to train your mind to take better photos as well. 1. This was one of the first quotes that hugely influenced my street photography. However don’t mistake this quote for getting close simply for the sake of getting close. 2. When you are out shooting and you felt that you got a “keeper” it is easy to run home, post-process the image, and upload it to the internet for the rest of the world to see. Nowadays I try to wait either a few days or a week before deciding whether my photo is a “keeper” or not. 3. Street photography is all about telling stories, and also a mode of self-expression. 4. 5. 6. 7. 9. 10.

Untitled Document An Interview with Garry Winograndfrom Visions and Images: American Photographers on Photography, Interviews with photographers by Barbara Diamonstein, 1981–1982, Rizoli: New York Garry Winogrand is one of the most important photographers at work in America today. His sophisticated snapshot-aesthetic pictures celebrate ordinary events, and transform them with precise timing and framing into astute visual commentaries on modern life. Barbaralee Diamonstein: Garry, the New School is not unfamiliar ground to you. Garry Winogrand: Yes. D: You began to photograph just at that period when you were less then twenty years old. W: Cameras intrigued me. D: You started out studying painting, though, didn't you? W: Yeah, well, cameras always were seductive. D: How does a darkroom "become available"? W: There was a camera club at Columbia, where I was taking a painting course. D: You started out supporting yourself with commercial work — advertising photography and such things. D: How so? D: As subjects?

101 Inspirational Street Photography Quotes (Above Image Copyrighted By Steve McCurry / Magnum Photos) Charlie Atkinson: So for this weeks post I thought I would share my favorite quotes from some of my favorite photographers as well as a few others that can be applied to photography as well! They are also not in any particular order, this post is by me as well (not Eric!) as I think there was some confusion on the last gear post I did :). Enjoy! 1.”Q: Do you really distance yourself from your subject? (Copyright: Peter Barker-Morgan) 26. (Copyright: Charlie Atkinson) 51. Images: Steve McCurry Charlie Atkinson Peter Barker-Morgan

Zen in the Art of Street Photography (All photographs in this article provided by Rinzi Ruiz ) My good friend Nicholas Susatyo recently recommended a book to me: “ Zen in the Art of Archery .” In-fact, it was the book that Henri Cartier-Bresson said had the deepest influence in his photography. I have been meaning to read it for a while, so on my flight to Philly I decided to give it a go. The book is written by Eugen Herrigel , a German philosophy teacher who went to Japan for several years and learned the art of archery (while teaching philosophy at a Japanese university). He heard about the art of archery, and was fascinated with the zen philosophy which was embedded in the art. Zen in the Art of Archery As we all know, archery is no longer practiced in the “real world” in battles and such. However with some good luck (a good introduction by a Japanese friend) and some persistence, Herrigel was able to go under the wing of one of the greatest archers in Japan. 1. Rinzi Ruiz Suggestion: 2. 3. 4. 5. Conclusion

How to Direct Your Subjects When Shooting Street Portraits (Above video: New street portrait POV video I recorded in Chicago. Chicago Street Portraits, Volume #5 ) I have always been drawn to people, especially those who I find are interesting “characters.” I tend to gravitate towards people who have interesting facial expressions, to those with outstanding outfits, or accessories. Although the majority of the street photography I do is done candidly, I have been drawn towards doing more posed street portraits of people I find interesting. Why? So once I get my subjects’ attention– how do I direct them and what is some of the psychology that goes behind it? Why get my subjects to pose? A portrait of a guy I shot in Downtown LA at Starbucks. Street photography is generally understood as taking candid photos. I still do believe that candid photos tend to be more interesting than posed photos– but I think with enough luck and determination you can still get interesting posed photos of people on the street. How to approach your subjects Conclusion

10 Lessons Weegee Has Taught Me About Street Photography Weegee is certainly one of the most infamous street photographers in history. Although he never called himself a street photographer (he worked as a press/news photographer) his obsession with capturing people was unparalleled. With no formal photographic training, he covered some of the most gruesome murders (and shots of everyday life) around New York City from the 1930′s to the 1940′s. Armed with a portable police-band shortwave radio, he was always on the beat for new stories to cover– and he even had a complete darkroom in the trunk of his car. This allowed him to get his photos to the newspapers as quickly as possible. Weegee is also famous for the use of his 4×5 Speed Graphic large-format press camera and flash– which added even more drama to his gritty black and white photos. Many street photographers are under the false impression that shooting with artificial light in street photography is just a recent phenomenon. Note: some of these photos are gruesome and NSFW. 1. 2. 3. 4.

7 Lessons W. Eugene Smith Has Taught Me About Street Photography W. Eugene Smith is one of the legends of photography. Although he was notorious for being maniacal, emotionally distant, and unreasonable– he channeled those energies into being one of the best photographers history has ever seen. I consider his approach to be very similar to that of Steve Jobs . I hope that this article can help you get a better understanding of W. 1. Tomoko in Her Bath, Mother and daughter with Minamata Disease, Japan. W. In a rare interview in 1956 with the great portraitist Philippe Halsmann they discuss the point of why W. Halsmann: “When do you feel that the photographer is justified in risking his life to take a picture?” Smith: “I can’t answer that. I think the photographer should have some reason or purpose . W. Takeaway point: Often times us as street photographers have a hard time figuring out why we photograph. Are we out there trying to just take snapshots? This is a question you can only answer yourself. 2. SPAIN. Although W. W. 3. 4. W. 5. USA. W. 6. 7.

getting started with street photography | Mortal Muses Street photography always sounded like a great idea to me, but when it came to actually doing it I nearly always chickened out – I’d see a great photo opportunity and then be too nervous to go for it in case I was spotted. It can seem really daunting at first, and when you’ve never done it before you can feel very self-conscious, but there are some great shots out there just waiting for you to spot them. Street photography can be one of the most rewarding kinds of photography there is—there’s nothing like going out not knowing what you’ll find, and then coming home feeling all excited because you got something great. Eventually I found ways of getting started that worked for me, so I want to pass on what I’ve learned in the hope that it might make it a bit easier for anyone else who’s just beginning and is a little nervous about getting out there. What is street photography? Cameras and lenses Any camera will do, but the smaller the camera the less obvious it will be what you’re doing.

5 Top Tips to Get Started with Street Photography Street photography is a means of capturing society in the moment, a chance to document life as we know it, freezing human actions and reactions to the world around us. It’s a great way to incorporate your photography with your responses to the community around you, here are five tips to get you started. Step 1 – Location Choosing your location is vital to the success of your work. Step 2 – Equipment Traditionally, street photographers will use a 35mm lens (a wide/normal lens), which means you have to get up close and involved in the action. There are a few tips on how to make it easier for yourself. Step 3 – Eyes open and act fast A lot of what street photography is about comes down to opportunism, catching that split second moment or reaction, so it’s important to keep your eyes open and be observant. Don’t wait around to see if the scene before you develops into something different. Step 4 – Rules & Laws Step 5 – Now It’s Your Turn