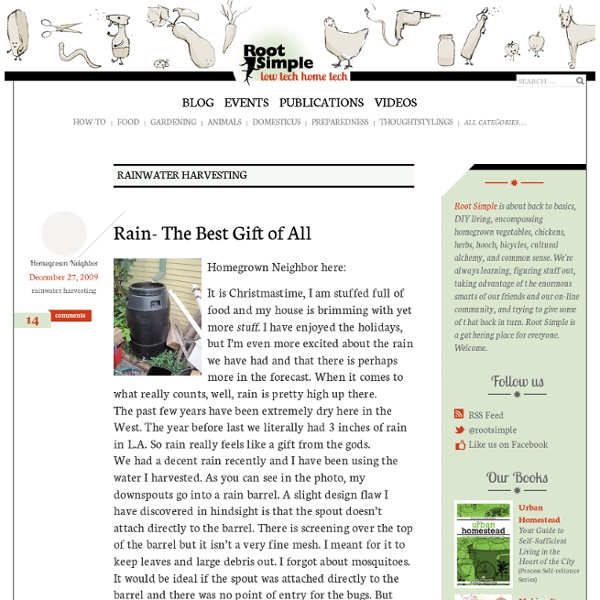 There’s a lot of advice floating around the internets about how to make a rain barrel. Most barrel pundits suggest drilling a hole in the bottom of a barrel and installing a faucet, a kind of connection called a “bulkhead fitting”. Unfortunately such improvised fittings have a tendency to leak. My favorite way to make a rain barrel is to take a 55 gallon drum, use the preexisting fittings on the top and turn it upside down, a process explained nicely here (complete with a list of parts), by B. Chenkin who will also sell you a kit at Aquabarrel.com. To get started, you get a ubiquitous 55 gallon drum with two threaded “bung” holes that look like this: A good source for this kind of barrel is your local car wash. Glue that up with some PVC cement, wrap the threads with teflon tape, and you’re almost ready to collect rainwater. The overflow connection is another reason I like Chenkin’s design. Related:  Water • sarathsiripala

DIY Solar Still How To Make Your Own Distilled Water Make your own distilled water from stream or lake water, salt water, or even brackish, dirty water, using these DIY Solar Still Plans. With just a few basic building materials, a sheet of glass and some sunshine, you can purify your own water at no cost and with minimal effort. Distilled water is not just for drinking, and it’s always worth keeping a few gallons of it on hand. • Always refill the lead-acid batteries used for solar energy systems or automobiles with distilled water • Water delicate plants like orchids with distilled water; minerals and additives like fluoride or chlorine that are present in most tap water can harm plants • Distilled water mixed with antifreeze is recommended for car radiators, as it’s less corrosive • Steam irons become clogged with mineral deposits unless you use distilled water The box is built from 3/4 ” BC-grade plywood, painted black on the inside to absorb heat. How to Make a Solar Still 1. 2. 3. 4. 5. 6. 7. 8. 9.

How to Build a Rainwater Collection System: 9 steps Steps Method 1 of 4: Getting Rain Barrel Supplies 1Obtain one or more water storage barrels. You can buy a water storage barrel online, but it's cheaper to get a used one from a company that uses large barrels to store food and other merchandise (just be sure to clean it thoroughly with soapy water). 2Get additional supplies to turn the barrels into a water collection system. Method 2 of 4: Building a Rain Barrel Platform 1Level an area right next to your downspout. 3Stack concrete blocks on top of the pea gravel. Method 3 of 4: Adding the Spigot and Overflow Valve 1Drill a spigot hole in the side of your barrel. 4Make an overflow valve. Method 4 of 4: Assembling the Collection System 1Connect the downspout elbow to the downspout. 4Connect the additional barrels. Tips Ad Warnings Water collected from some rooftops will also contain chemical components from the composition roofing.Many parts of the earth receive 'acid rain.' Sources and Citations

Foraging It’s acorn season in Southern California. I’ve long been interested in acorns, knowing that they were the staple food of the native people who lived here, and I’ve gathered and processed them before. However, once I have the acorn meal, I’ve never known exactly what to do with it. Pascal and Mia putting out a spread: acorn sliders, acorn and tapioca pudding, red cabbage and red onion slaw with wild juniper berries, chocolate truffles infused with white sage and dusted with dehydrated raspberry powder, plum membrillo and beer hopped with yarrow. Pascal and Mia are high caliber foragers and foodies. It’s rare to find folks who combine deep food know-how with a love of wild foods. On Sunday, Erik and I attended their acorn processing workshop, where we learned some valuable tips regarding acorn processing, and were privileged to eat the finest vegetarian burgers we’ve ever tasted — sliders made with acorns. Here’s a recipe from Mia’s Transitional Gastronomy site for acorn timbales.

Rainwater Collection Systems Above the Clouds, Beneath the Stars: Pic du Midi Observatory in the Pyrenees Atlas Obscura on Slate is a new travel blog. Like us on Facebook, Tumblr, or follow us on Twitter @atlasobscura. The scene at Pic du Midi is one out of a sci-fi movie: a fortified concrete-and-stone complex, packed full of metal domes, sprawls across the top of a precipitous peak above the clouds. At an altitude of 9,349 feet, the sweeping view of the surrounding French Pyrénées is rivaled only by the site's magnificently dark night sky. Prime observing conditions are the reason why astronomers have made the arduous trek up this mountainside for an unobstructed view of the firmament since 1884. While accessing the summit in those days was a much more trying experience, it did not stop scientists from constructing a full-fledged meteorological station and astronomical observatory in the 1870s. The observatory is also home to the highest museum in Europe, one that will guide you through the history of Pic du Midi and over a century of scientific research and technological progress.

Parabolic Trough Solar Collector water heater Build a Rainwater Collection System Ten years ago, I acquired two 55-gallon plastic drums to store an emergency supply of water for the impending Y2K disaster occurring at the stroke of midnight 2000. Of course, I became suspicious when the plane I was flying on did not fall out of the sky on 9/9/99 and my trusty Honda still ran like a charm well past January 1, 2000. Being the positive person that I am, I was grateful to acquire several storage containers of personal hygiene items, first aid supplies and all kinds of camping paraphenia that I still use. So what if Y2K was the biggest con ever-perpetuated on mankind? I have all kinds of emergency supplies on hand, plus two 55-gallon plastic barrels! As an avid vegetable and flower gardener, I’ve been hearing about the importance of using a system of collecting rainwater runoff from roofs. Containers can be easily found on Craigslist by searching for “rain barrels” or a local feed store for a going rate of $10 to $15. Step 1) Clean the barrels. Like this: Like Loading...

Building StrawBale Houses Strawbale houses are cheap, easy to build and can be put up in a relatively short period of time. Strawbale houses are usually made by stacking rows of straw bales with a moisture barrier between the bales and the supporting platform. Building with bales of straw has become very popular and can be seen in many areas of the Southwestern United States. Straw is a renewable building material and is a great insulator from the elements. Strawbale Homes Strawbale Resources: Collecting rainwater now illegal? (NaturalNews) Many of the freedoms we enjoy here in the U.S. are quickly eroding as the nation transforms from the land of the free into the land of the enslaved, but what I'm about to share with you takes the assault on our freedoms to a whole new level. You may not be aware of this, but many Western states, including Utah, Washington and Colorado, have long outlawed individuals from collecting rainwater on their own properties because, according to officials, that rain belongs to someone else. As bizarre as it sounds, laws restricting property owners from "diverting" water that falls on their own homes and land have been on the books for quite some time in many Western states. Only recently, as droughts and renewed interest in water conservation methods have become more common, have individuals and business owners started butting heads with law enforcement over the practice of collecting rainwater for personal use. "Utah's the second driest state in the nation.

Live in Dubai DSC05740 Solar Distillation by NG H2O.avi Commercial Rainwater Harvesting Systems The practice of rainwater harvesting dates back to the earliest days of civilization yet was nearly lost in the age of inexpensive and readily available municipal water supplies. Lately, with the cost and supply of municipal water becoming an issue, there has been a growing resurgence of interest in rainwater harvesting by home and building owners. Thousands of small systems suppliers have emerged to fill the demands of homeowners across the country. But there are special challenges for the more sophisticated systems installed in commercial and institutional buildings. The vastly larger quantities of rainwater collected require more sophisticated processing and storage, and the engineering standards and approval requirements are significantly more rigorous. Wahaso focuses entirely on the commercial and institutional building market – and has developed proven, large-scale rainwater harvesting systems that meet rigorous building and regulatory requirements.