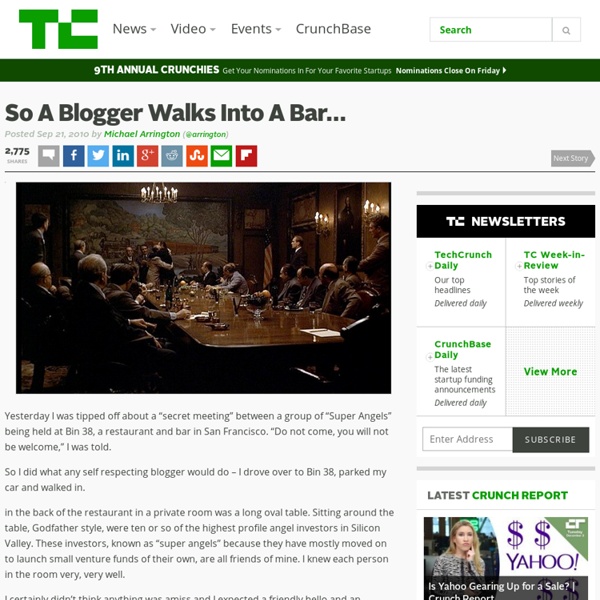 Yesterday I was tipped off about a “secret meeting” between a group of “Super Angels” being held at Bin 38, a restaurant and bar in San Francisco. “Do not come, you will not be welcome,” I was told. So I did what any self respecting blogger would do – I drove over to Bin 38, parked my car and walked in. in the back of the restaurant in a private room was a long oval table. Sitting around the table, Godfather style, were ten or so of the highest profile angel investors in Silicon Valley. I certainly didn’t think anything was amiss and I expected a friendly hello and an invitation to sit down for a drink or two before being shooed off while they talked about whatever they thought should be kept off record. Me: Hey! I’ve never seen a more guilty looking group of people. This group of investors, which together account for nearly 100% of early stage startup deals in Silicon Valley, have been meeting regularly to compare notes. So what’s wrong with this? This isn’t minor league stuff.

How to invest in the coming app bubble - The Cody Word By Cody Willard AppConsumer editor-at-large, Nathania Johnson published a great rebuttal today to an article provocatively titled, “Mobile apps and why they have no future.” She goes through author Rob Ford’s piece bullet point, by bullet point here, and I want to hit on one of her points because every tech investor needs to be thinking about this right here, right now as we enter our App Future. “Apps are like the Internet in the 90s.” Uhh, hello! And as I’ve said many times in the last few months and as I’ll say many more times in coming months, didn’t the Internet change everything? Don’t you think you want to get in front of the app revolution because it’s very, very likely to turn into an app bubble, just like the Internet Revolution went through its own bubble phase? Do you remember the PC Revolution and how it bubbled and how hundreds of companies were created, built into mini-juggernauts and then flamed out? Do you see how all those revolutions played out similarly?

Guidelines for potential angel investors (Editor’s note: Will Herman is an entrepreneur who has founded or held senior roles in several tech companies.This story originally appeared on his blog.) I did my first angel investment in 1994 and I’m now in the process of wrapping up my 31st (individually, that is, not as part of a fund). It’s also my third in the past six months. I’ve probably done about 30 more as a limited partner in seed funds and incubators along the way as well. All in, that probably makes me a second tier angel investor, at least in terms of deals done. Third tier if you count the “super angels” who have knocked off hundreds of deals in shorter periods of time. I invest because I have a blast doing it. The difference between a second tier the first tier guys and investor like me (other than brains and talent) is the first tier investors actually work at finding investments. Fortunately, I’ve been moderately successful with this type of investing. The general ones: My Personal Guidelines:

I’m Still Going Long and Hoping the Markets Go Down First rule of Investing. Dont fall in love with positions or try to prove yourself right. I thought we might get a bounce. I was wrong. I covered my short puts when the market started to shed its gains. So I lucked out there. More importantly, i wanted to clarify my bullishness. Once I made the decision to go long, I didnt just dive in and buy everything I wanted to own. Individuals are capitulating. We are also seeing a corporate margin call reminiscent of the Tech Bubble Burst of 2000. Hedge Fund, Mututal Fund, Exec Selling is pushing supplies of shares far beyond demand. I dont know how low the market will go, and I know this is very self serving, but from a portfolio perspective, the lower the better. We have come down 6,000 Dow Points from the high.

Become a Millionaire on $20 a Day Sock away $20 a day, every day, and you'll very likely wind up a millionaire. Not by stuffing it under your mattress, though. Twenty bucks a day under your mattress would give you a million bucks ... after more than 135 years. That's double the normal retirement age! Ten-year Treasury notes recently offered a 4.46% yield. Agree to take on a bit more volatility, though, and you can position yourself to do even better than that. It gets interesting, though, if you're investing using a strategy that has a legitimate chance to beat the market. That's a big "if"Of course, very few investors have reliably outperformed the market over time spans measured in decades. While you and I may never achieve the tremendous level of returns that these masters have earned, their stories show that the market can and has been beaten. If you're going the individual stock route, there is some good news. Brand rank data from BusinessWeek. Get started nowOf course, there's a catch.