Tools for a Safer PC 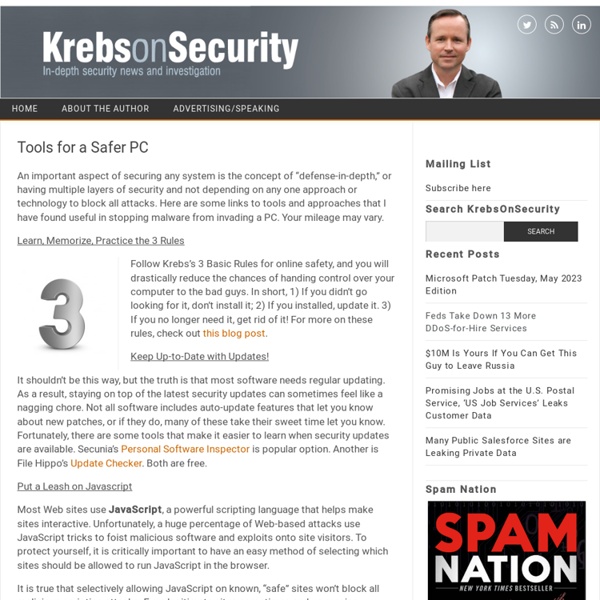 An important aspect of securing any system is the concept of “defense-in-depth,” or having multiple layers of security and not depending on any one approach or technology to block all attacks. Here are some links to tools and approaches that I have found useful in stopping malware from invading a PC. Your mileage may vary. Learn, Memorize, Practice the 3 Rules Follow Krebs’s 3 Basic Rules for online safety, and you will drastically reduce the chances of handing control over your computer to the bad guys. In short, 1) If you didn’t go looking for it, don’t install it; 2) If you installed, update it. 3) If you no longer need it, get rid of it! Keep Up-to-Date with Updates! It shouldn’t be this way, but the truth is that most software needs regular updating. Put a Leash on Javascript Most Web sites use JavaScript, a powerful scripting language that helps make sites interactive. Firefox has many extensions and add-ons that make surfing the Web a safer experience. Microsoft EMET Avast AVG Free

The Value of a Hacked Email Account One of the most-viewed stories on this site is a blog post+graphic that I put together last year to illustrate the ways that bad guys can monetize hacked computers. But just as folks who don’t bank online or store sensitive data on their PCs often have trouble understanding why someone would want to hack into their systems, many people do not fully realize how much they have invested in their email accounts until those accounts are in the hands of cyber thieves. This post aims to raise awareness about the street value of a hacked email account, as well as all of the people, personal data, and resources that are put at risk when users neglect to properly safeguard their inboxes. Sign up with any service online, and it will almost certainly require you to supply an email address.

How France's TV5 was almost destroyed by 'Russian hackers' Image copyright Getty Images A powerful cyber-attack came close to destroying a French TV network, its director-general has told the BBC. TV5Monde was taken off air in April 2015. A group calling itself the Cyber Caliphate, linked to so-called Islamic State, first claimed responsibility. But an investigation now suggests the attack was in fact carried out by a group of Russian hackers. The attack used highly targeted malicious software to destroy the TV network's systems.

The Scrap Value of a Hacked PC, Revisited A few years back, when I was a reporter at The Washington Post, I put together a chart listing the various ways that miscreants can monetize hacked PCs. The project was designed to explain simply and visually to the sort of computer user who can’t begin to fathom why miscreants would want to hack into his PC. “I don’t bank online, I don’t store sensitive information on my machine! I only use it to check email. What could hackers possibly want with this hunk of junk?

The Scrap Value of a Hacked PC, Revisited A few years back, when I was a reporter at The Washington Post, I put together a chart listing the various ways that miscreants can monetize hacked PCs. The project was designed to explain simply and visually to the sort of computer user who can’t begin to fathom why miscreants would want to hack into his PC. “I don’t bank online, I don’t store sensitive information on my machine! I only use it to check email.

Security Tools Last week’s article about how to prevent CryptoLocker ransomware attacks generated quite a bit of feedback and lots of questions from readers. For some answers — and since the malware itself has morphed significantly in just a few day’s time — I turned to Lawrence Abrams and his online help forum BleepingComputer.com, which have been following and warning about this scourge for several months. This message is left by CryptoLocker for victims whose antivirus software removes the file needed to pay the ransom. To recap, CryptoLocker is a diabolical new twist on an old scam. The malware encrypts all of the most important files on a victim PC — pictures, movie and music files, documents, etc. — as well as any files on attached or networked storage media.

Internet Toolkit Update Check An online service to help Windows users check installed programs are up to date and do not have known security vulnerabilities. more... Antivirus Malware in email und Internet pages are now everyday occurences. On our antivirus pages you can find tips on how to how to protect your system, links to free and commercial antivirus software, and advice on how to rid your system of these microbes. more... Browsercheck

An Introduction to the ELK Stack (Now the Elastic Stack) Most Recent Getting Started On Demand Videos: Looking for a hosted & managed solution? Check out the Elastic's 14-Day Free Cloud Trial. By combining the massively popular Elasticsearch, Logstash, and Kibana (what was the ELK Stack is now the Elastic Stack), Elastic has created an end-to-end stack that delivers actionable insights in real time from almost any type of structured and unstructured data source. Built and supported by the engineers behind each of these open source products, the Elastic Stack makes searching and analyzing data easier than ever before. Thousands of organizations worldwide use these products for an endless variety of business critical functions.

Data Broker Giants Hacked by ID Theft Service An identity theft service that sells Social Security numbers, birth records, credit and background reports on millions of Americans has infiltrated computers at some of America’s largest consumer and business data aggregators, according to a seven-month investigation by KrebsOnSecurity. The Web site ssndob[dot]ms (hereafter referred to simply as SSNDOB) has for the past two years marketed itself on underground cybercrime forums as a reliable and affordable service that customers can use to look up SSNs, birthdays and other personal data on any U.S. resident. Prices range from 50 cents to $2.50 per record, and from $5 to $15 for credit and background checks. Customers pay for their subscriptions using largely unregulated and anonymous virtual currencies, such as Bitcoin and WebMoney.

In surveillance era, clever trick enhances secrecy of iPhone text messages A security researcher has developed a technique that could significantly improve the secrecy of text messages sent in near real time on iPhones. The technique, which will debut in September in an iOS app called TextSecure, will also be folded into a currently available Android app by the same name. The cryptographic property known as perfect forward secrecy has always been considered important by privacy advocates, but it has taken on new urgency following the recent revelations of widespread surveillance of Americans by the National Security Agency.

Inverse Path - USB armory The USB armory from Inverse Path is an open source hardware design, implementing a flash drive sized computer. The compact USB powered device provides a platform for developing and running a variety of applications. The security features of the USB armory System on a Chip (SoC), combined with the openness of the board design, empower developers and users with a fully customizable USB trusted device for open and innovative personal security applications. Oh great: New attack makes some password cracking faster, easier than ever A researcher has devised a method that reduces the time and resources required to crack passwords that are protected by the SHA1 cryptographic algorithm. The optimization, presented on Tuesday at the Passwords^12 conference in Oslo, Norway, can speed up password cracking by 21 percent. The optimization works by reducing the number of steps required to calculate SHA1 hashes, which are used to cryptographically represent strings of text so passwords aren't stored as plain text. Such one-way hashes—for example 5baa61e4c9b93f3f0682250b6cf8331b7ee68fd8 to represent "password" (minus the quotes) and e38ad214943daad1d64c102faec29de4afe9da3d for "password1"—can't be mathematically unscrambled, so the only way to reverse one is to run plaintext guesses through the same cryptographic function until an identical hash is generated. Aumasson is the main designer of BLAKE, one of five finalist hash functions in the competition to designate the SHA3 algorithm.

Samy Kamkar: PoisonTap - exploiting locked computers over USB Created by @SamyKamkar || When PoisonTap (Raspberry Pi Zero & Node.js) is plugged into a locked/password protected computer, it: emulates an Ethernet device over USB (or Thunderbolt)hijacks all Internet traffic from the machine (despite being a low priority/unknown network interface)siphons and stores HTTP cookies and sessions from the web browser for the Alexa top 1,000,000 websitesexposes the internal router to the attacker, making it accessible remotely via outbound WebSocket and DNS rebinding (thanks Matt Austin for rebinding idea!) Live demonstration and more details available in the video: PoisonTap evades the following security mechanisms:

Why passwords have never been weaker—and crackers have never been stronger In late 2010, Sean Brooks received three e-mails over a span of 30 hours warning that his accounts on LinkedIn, Battle.net, and other popular websites were at risk. He was tempted to dismiss them as hoaxes—until he noticed they included specifics that weren't typical of mass-produced phishing scams. The e-mails said that his login credentials for various Gawker websites had been exposed by hackers who rooted the sites' servers, then bragged about it online; if Brooks used the same e-mail and password for other accounts, they would be compromised too. The warnings Brooks and millions of other people received that December weren't fabrications.