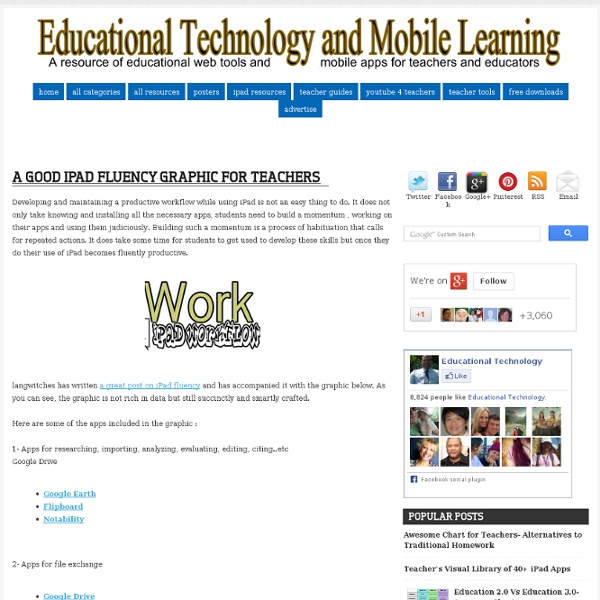 Developing and maintaining a productive workflow while using iPad is not an easy thing to do. It does not only take knowing and installing all the necessary apps, students need to build a momentum , working on their apps and using them judiciously. Building such a momentum is a process of habituation that calls for repeated actions. It does take some time for students to get used to develop these skills but once they do their use of iPad becomes fluently productive. langwitches has written a great post on iPad fluency and has accompanied it with the graphic below. Here are some of the apps included in the graphic : 1- Apps for researching, importing, analyzing, evaluating, editing, citing..etc Google Drive 2- Apps for file exchange 3- Apps for screencasting, creating, remixing, mindmapping, reflecting, blogging, demonstrating visual thinking...etc 4- Apps for sharing with teacher, peers or global audienceHere is the graphic which you can download in PDF format from HERE. Related:  Paddagogik allmänt

iPads In The Classroom: The Right Questions You Should Ask The pressure is on to make sure the education of U.S. students is on track with their global peers. Unfortunately, according to a 2015 report by Pew Research Center, that’s not the case, particularly in the areas of science and math. It’s no wonder, then, that in the quest for educational advancement, teachers want their students to have access to the newest, theories, processes and technologies to help the students excel. One of the most popular technologies has been the introduction of tablets, particularly, iPads, in the classroom. Maybe you’ve been thinking about augmenting your program with iPads or another type of tablet. Photo from Flickr via Brad Flickinger The Necessity of Asking the Right Questions Before You Invest Have you ever gone to the doctor, with a diagnosis already in your head, but when he reviewed your symptoms, he came up with a completely different conclusion? Why Do You Need an iPad? How will it benefit you? Would the iPad support your current or desired lesson plans?

Allan's Blog Fourni par Traduction DOWNLOAD THE LATEST VERSION: V4 published Mar 2015. This PDF Poster has links to 122 of the latest and most popular educational apps. Now these resources are available in 19 different languages. V4.0 was published in March 2015 but I knew I was onto something useful when I first put the Padagogy Wheel together in July 2012. So why the need for Version 2.0? We need to have transformation at the core of what we do: If it is all about the students, where do you start with curriculum and/or teaching design – surely it is with what do you want your graduates to look like? Technology integration into the fabric of learning and teaching: is where we should be heading with all we do as teachers. Finally, can you help with V3.0? Please join in the conversation with your ideas and comments using the comments area of this blog. The Padagogy Wheel by Allan Carrington is licensed under a Creative Commons Attribution 3.0 Unported License.

iPad Workflow Solutions for Educators Recently, I attended ITEC 2012 -Iowa’s premier technology conference for educators. David Pogue and Marco Torres were the keynote speakers, but there were dozens of other excellent breakout sessions over the course of this three-day event. I myself had the opportunity to present twice, so I opted for a couple of iPad sessions that I had been wanting to talk about for some time now, and I have included the slides to the first of these two sessions below – iPad Workflow Solutions for Educators. A digital workflow for the iPad, or the process of getting student work to and from the device, has long been a subject of some consternation among those who use iPads in the classroom. Why? The reason is simple. Thankfully, this is beginning to change. So, feel free to take a look at some of the options that are available to you if you use iPads in the classroom. Like this: Like Loading...

Why Teachers Are Trying Out Apple TV In The Classroom Apple TV is a little black box that can work miracles in a classroom. Built largely for entertaining purposes by Apple, Apple TV is used increasingly in the classroom by educators who primarily want to take advantage of the mirroring capabilities of the device. For those who are not familiar with the term “mirroring”, simply put, a key feature in Apple devices called “AirPlay” can literally mirror or project your device’s screen (iPod/iPad/iPhone), via an LCD projector that is connected to the Apple TV. All you need aside from an Apple TV is an iPad 2 or newer, an LCD projector, and then, the sky is the limit. iBooks & Reading Providing visual access to iBooks for all students with just one iPad in the classroom is, by itself, a reason for a teacher to buy an Apple TV. Cost-conscious teachers may kill two birds with one stone, so to speak. Math and Science Apps Reading is not the only subject that can benefit from an Apple TV in the classroom. What do you think?

How to be a TERRIBLE iPad Teacher | teachingwithipad The following is a list, written in the first-person, of ideologies or stances from a Terrible iPad Teacher: 1. I own an iPad and I use it in class. I am, therefore, an effective Twenty-First century educator . Things in life don’t come easy. Nobody masters an educational tool overnight. 2. 3. 4. Above: A search for “Education” in the App store yields over 10,000 results. 5. 6. Above: Explain Everything records visual and audio for your classes Above: Haiku Deck offers beautiful (and free!) 7. 8. Above: While the pre-installed apps on an iPad are great, there is just so much more available 9. 10. All of us have been guilty of at least some of the list at least once. Further reading: iPads: Creation vs. iPad is right for PE! iPaddiction: Creation Apps Used on the iPad Do you have any other tips for iPad teachers? Did you like this post? Authors: Steve Lai ( @sly111 ) is a French Teacher from Richmond, British Columbia, Canada in his twelfth year of teaching. Like this: Like Loading...

A Day in the Life of an iPad Teacher | syded 6.30 am: Woken by the dulcet tones of Lana Del Rey and a new ‘Wake up Light‘. Contemplate staying in bed then notice the email icon flashing with a number of new messages – check twitter. 7.00 am: Access news app whilst devouring breakfast. Apologise for spraying coffee during reaction to latest education announcement. Carefully wipe iPad screen and check all is in working order by scrolling twitter timeline. 7.20 am: Plug iPad into car stereo and load ‘Driving’ playlist. 8.00 am: Deal with overflowing inbox on iPad whilst waiting for school computer to load. 8.25 am: Contemplate handing in resignation as only free period of the day has become a history cover with year 10. 8.45 am: Take staff briefing notes on iPad and share with form group on Edmodo before walking to classroom. 9.10 am: Lesson one with year 7 and they are all excited to share their completed projects. 10.10 am: Lesson two starts with a mild panic as projector isn’t working. 6.30 pm: Stay in car and check twitter.

A Day in the Life of an iPad Student | syded 7.00 am: Woken by fancy chime and skyscraper illumination on iPad. Switch off and go back to sleep. 7.15 am: Woken by beeping Angry Bird effect and grudgingly get up for school. 7.45 am: Mum waves goodbye as Dad brings iPad charger out ‘just in case the battery runs low’. 7.55 am: Find seat on bus and use famous ‘inside PE shirt, inside bag’ technique to play Temple Run on iPad. 8.25 am: Arrive at school and remind friends that the ‘iPad lost it’ excuse doesn’t work. 8.45 am: Registration and while we are answering our names the ‘iPad teacher‘ comes in to remind us about sharing folders in Dropbox and how to use the Edmodo conversation wall. 9.05 am: First lesson and we have to do a quiz straight away. 10.05 am: Second lesson and the teacher tells us off for getting our iPads out. 11.05 am: Break-time and whilst eating my lunch, I sneakily show my friend the iMovie trailer I made for French. 11.30 am: Third lesson and as usual we use loads of material. Like this: Like Loading...

An iPad a day keeps school absenteeism at bay | Education | Schools An iPad app that offers access to over 600 school textbooks, spanning 33 subjects in six South African languages was launched on Wednesday. "The app offers access to CAPS-aligned [new curriculum] textbooks for grades one to 12," said Linda de Klerk, marketing director for ZA Books. Fourteen publishers, including giants Maskew Miller Longman and the Cambridge University Press bought in to the concept because they said "making textbooks available in e-format is a necessity", De Klerk told a gathering at the Apple store in Johannesburg. Downloading the app is free and schools can buy the titles by setting up an account on ZAbooks.co.za and ordering a book list on the website. "The titles are a minimum of 25% cheaper than the physical title," she said. The app offered interactive features such as a highlighting, sticky notes, and a free-hand drawing tool. De Klerk said 180 private and government schools in South Africa have integrated iPads into their classes.

Ideas for Using iPads for Digital Storytelling By Sam Gliksman The following is the first of a series of excerpts from Gliksman’s book iPad in Education for Dummies. The digital aspect of storytelling raises the art to a new level of experience. The emergence of technology and digital media has resulted in some significant departures from the traditional role of storytelling in education: Stories have become media-rich experiences. Reading and writing remain crucial educational components. When you think of storytelling from a traditional perspective, you might conjure up any of these images of Danny Kaye telling a story to a group of children seated on the ground; a kindergarten teacher reading a book to a group of young students; a parent reading a bedtime story to a child. Then we reached the information age. Students are becoming producers of knowledge: digital storytellers who use technology to express themselves. Students traditionally produced a product for an audience of one: their teacher. Related

Are Your Students Distracted by Screens? Here's A Powerful Antidote I was fortunate to teach in a 1:1 laptop classroom for seven years. In my classes, students took daily notes on computers, did research, wrote essays, created various multimedia publications, and worked on collaborative projects. Yet I knew that if I wasn’t watching their screens, my students would at some point be doing something they were not supposed to be doing. Many teachers I encounter have decided that they need to crack down on — if not entirely eradicate — screen distractions in their classrooms. Yet, I rarely indulge in discussions of “Big Brother” tools and strategies. The best classroom management tool is a good lesson. If the activity is engaging and challenging, there is an authentic audience, and prescribed time limits, students won’t mess around. I see it at work regularly in my PD workshops. More importantly, it happens in K-12 classrooms all the time. “Can I have more time to work on it?” There’s also an authentic audience.