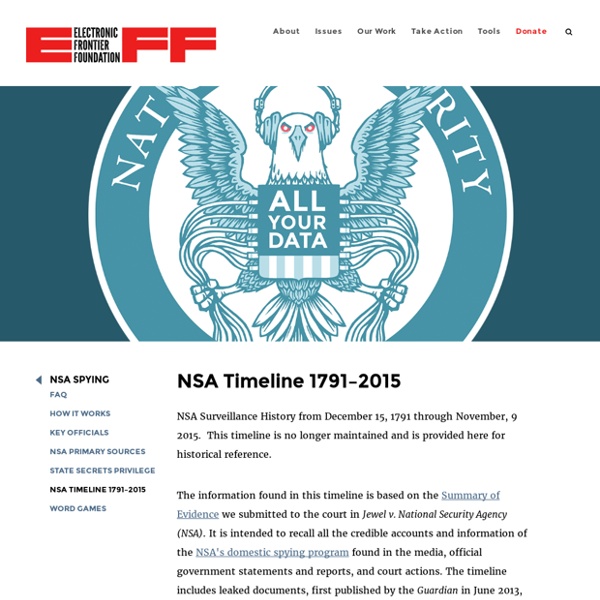 "In the anxious months after the Sept. 11 attacks, the National Security Agency began sending a steady stream of telephone numbers, e-mail addresses and names to the FBI in search of terrorists. The stream soon became a flood, requiring hundreds of agents to check out thousands of tips a month. But virtually all of them, current and former officials say, led to dead ends or innocent Americans. FBI officials repeatedly complained to the spy agency, which was collecting much of the data by eavesdropping on some Americans' international communications and conducting computer searches of foreign-related phone and Internet traffic, that the unfiltered information was swamping investigators. Some FBI officials and prosecutors also thought the checks, which sometimes involved interviews by agents, were pointless intrusions on Americans' privacy."

Signal, the Snowden-Approved Crypto App, Comes to Android Since it first appeared in Apple’s App Store last year, the free encrypted calling and texting app Signal has become the darling of the privacy community, recommended—and apparently used daily—by no less than Edward Snowden himself. Now its creator is bringing that same form of ultra-simple smartphone encryption to Android. On Monday the privacy-focused non-profit software group Open Whisper Systems announced the release of Signal for Android, the first version of its combined calling and texting encryption app to hit Google’s Play store. It’s not actually the first time Open Whisper Systems has enabled those features on Android phones; Open Whisper Systems launched an encrypted voice app called Redphone and an encrypted texting program called TextSecure for Android back in 2010.

NSA Spying The US government, with assistance from major telecommunications carriers including AT&T, has engaged in massive, illegal dragnet surveillance of the domestic communications and communications records of millions of ordinary Americans since at least 2001. Since this was first reported on by the press and discovered by the public in late 2005, EFF has been at the forefront of the effort to stop it and bring government surveillance programs back within the law and the Constitution. History of NSA Spying Information since 2005 (See EFF’s full timeline of events here) News reports in December 2005 first revealed that the National Security Agency (NSA) has been intercepting Americans’ phone calls and Internet communications. Those news reports, combined with a USA Today story in May 2006 and the statements of several members of Congress, revealed that the NSA is also receiving wholesale copies of American's telephone and other communications records. EFF Fights Back in the Courts

The Real Science Behind Cracking Passwords b46f685f85e0af830d82ddbbe795eff3 By adding a unique salt, I can do something about that. I created a quick Javascript program that takes the user’s name, and pulls the first and last three letters from their username and makes them into a salt. Then, the program takes the salt, plus the user’s password, and runs them through the MD5 algorithm and produces the hash that will be their password. ​NSA develops cyber weapons, ‘attacker mindset’ for domination in digital war – Snowden leaks Published time: January 17, 2015 23:37 Reuters/Rick Wilking Mass surveillance by the NSA was apparently just the beginning. The agency is now preparing for future wars in cyberspace, in which control over the internet and rival networks will be the key to victory, documents leaked by Edward Snowden reveal. The National Security Agency’s aim is to be able to use the web to paralyze the enemy’s computer networks and all infrastructures they control – including power and water supplies, factories, airports, and banking systems, Der Spiegel magazine wrote after viewing the secret files.

N.S.A. Dragnet Included Allies, Aid Groups and Business Elite While the names of some political and diplomatic leaders have previously emerged as targets, the newly disclosed intelligence documents provide a much fuller portrait of the spies’ sweeping interests in more than 60 countries. Britain’s Government Communications Headquarters, working closely with the National Security Agency, monitored the communications of senior European Union officials, foreign leaders including African heads of state and sometimes their family members, directors of United Nations and other relief programs, and officials overseeing oil and finance ministries, according to the documents. In addition to Israel, some targets involved close allies like France and Germany, where tensions have already erupted over recent revelations about spying by the N.S.A. Details of the surveillance are described in documents from the N.S.A. and Britain’s eavesdropping agency, known as GCHQ, dating from 2008 to 2011. It is unclear what the eavesdroppers gleaned.

Inside TAO: The NSA's Shadow Network The insert method and other variants of QUANTUM are closely linked to a shadow network operated by the NSA alongside the Internet, with its own, well-hidden infrastructure comprised of "covert" routers and servers. It appears the NSA also incorporates routers and servers from non-NSA networks into its covert network by infecting these networks with "implants" that then allow the government hackers to control the computers remotely. (Click here to read a related article on the NSA's "implants".) In this way, the intelligence service seeks to identify and track its targets based on their digital footprints. These identifiers could include certain email addresses or website cookies set on a person's computer. Of course, a cookie doesn't automatically identify a person, but it can if it includes additional information like an email address.

How To Become A Hacker Copyright © 2001 Eric S. Raymond As editor of the Jargon File and author of a few other well-known documents of similar nature, I often get email requests from enthusiastic network newbies asking (in effect) "how can I learn to be a wizardly hacker?". Back in 1996 I noticed that there didn't seem to be any other FAQs or web documents that addressed this vital question, so I started this one. A lot of hackers now consider it definitive, and I suppose that means it is. The NSA and Me The tone of the answering machine message was routine, like a reminder for a dental appointment. But there was also an undercurrent of urgency. “Please call me back,” the voice said. “It’s important.” What worried me was who was calling: a senior attorney with the Justice Department’s secretive Office of Intelligence Policy and Review. By the time I hung up the payphone at a little coffee shop in Cambridge, Mass., and wandered back to my table, strewn with yellow legal pads and dog-eared documents, I had guessed what he was after: my copy of the Justice Department’s top-secret criminal file on the National Security Agency.

NSA Surveillance Lawsuit Tracker A federal appeals court recently ruled that the National Security Agency's bulk collection of Americans' phone records is illegal. The case was based on a lawsuit brought by the ACLU, and it's just one of many challenges to to government surveillance and secrecy. Here's a rundown of key suits. Are we missing any important cases? Email us or leave a comment below. Correction: An earlier version of this post said an ACLU FOIA suit was combined with a New York Times FOIA suit, and both lost in federal court.

The Best Hacking Tutorial Sites - Learn Legal Hacking - StumbleUpon written by: Daniel Robson•edited by: Aaron R.•updated: 2/13/2011 Whether it's to understand potential attack vectors or simply for the fun of it, learning the basics of hacking is something that a lot of people aspire to. Here's our list of the top tutorial based hacking sites. NSA taps into Google, Yahoo clouds, can collect data 'at will,' says Post The NSA has secretly tapped into the private fiber-optic networks that connect Google's and Yahoo's worldwide data centers, allowing the spy agency to suck up "at will" metadata and content belonging to users of the companies' services, according to The Washington Post. Under a program called MUSCULAR -- a joint project with British NSA counterpart the GCHQ -- the NSA takes advantage of overseas taps to intercept data flowing within Google's and Yahoo's geographically distributed data "clouds," where multiple copies of user data are stored unencrypted, the Post reports. The article cites documents leaked by former NSA contractor Edward Snowden, as well as unnamed "knowledgeable officials." Such data might include, for example, information in Gmail accounts or in Google Drive files. In a statement to the Post, Google said it was "troubled by allegations of the government intercepting traffic between our data centers, and we are not aware of this activity.

NSA revelations: the 'middle ground' everyone should be talking about As if there wasn't already enough NSA mass surveillance to worry about, last week we got a peek at the agency's arsenal of tools for exploiting the hardware and software of its targets. They're best described as a veritable SpyMall catalog of sophisticated concealed gadgets and surreptitious software "implants", each sneakier than the last in its ability to compromise and extract private data from the computers and phones on which they're installed. If you still thought there was anywhere in the electronic world to hide after you're in their sights, this should be enough to disabuse you of that notion once and for all. This lies atop six months of news of the myriad ways our metadata and, in some cases, our content, is being routinely collected and analyzed, cloud services and communications providers being compromised, and security standards that should be protecting us being sabotaged.