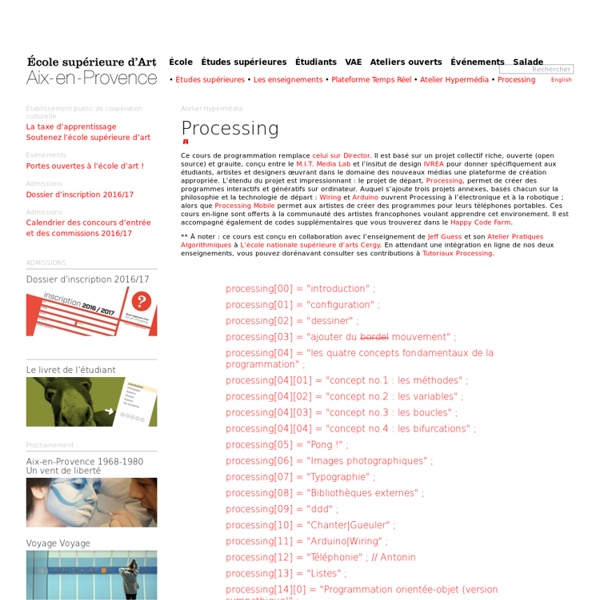 HOWTO: Manipulate an AudioSample in Minim 2.0 Kyle says, “Like what if I want to load up a sound and remove certain portions that fit some criteria or rearrange it (i.e., non-real-time processing)?” What you want to do is currently possible to a certain degree using AudioSample. It now has a method called getChannel(int), which comes from the BufferedAudio interface. This method returns in a float array the actual samples being used by the object when you trigger it. You can then manipulate those values and hear the change when you trigger it. Example (view online) books.html - processing - An open source programming language and environment for creating images, animation, and interactions Older revisions r10728 by r...@processing.org on Dec 18, 2012 Diff

Interactive 3D Graphics Course With Three.js & WebGL When does the course begin? This class is self paced. You can begin whenever you like and then follow your own pace. It’s a good idea to set goals for yourself to make sure you stick with the course. 50 Things You Didn't Know About Le Corbusier You know him for his round glasses, affinity for concrete and undying love for modernism, but do you really know Le Corbusier? Le Corbusier led his life not just as the 20th century's most influential architect, but also as an artist, socialite and theoretician. Taught by architects August Perret and Peter Behrens, criticized by the likes of Jane Jacobs and celebrated worldwide, Le Corbusier's legacy is undeniable. Dabbling often with controversy, Le Corbusier preferred the mantra “Architecture or Revolution,” designing structures that have been dubbed "anti-humanist." While some propose that his buildings collectively become a UNESCO World Heritage site, many call for their demolition. In 2015, 50 years after his death, the debate on the calibre of his controversial projects rages on.

Simple Coding - Introduction Software makes the world go round. Cars and TVs have software that controls how they work, and global commerce and finance are impossible without software that control the stocks, carry out payments, find the best transport route, etc. Coding (or programming) is the construction of software. Coding involves writing a ‘recipe’, which in Computing is called an algorithm, in a so called programming language that a computer can understand. When the computer runs the code we wrote, it follows the ‘recipe’, step by step. We will use Python, a popular programming language for teaching and for professional software development.

Quickstart Guide Setup and Shutdown To start using Minim you must first instatiate a Minim object, which you can then use to load audio files or acquire inputs and outputs. Here’s a partial program that demonstrates these things: Minim minim; AudioPlayer player; AudioInput input; void setup(){ size(100, 100); minim = new Minim(this); player = minim.loadFile("song.mp3"); input = minim.getLineIn(); } void draw(){ // do what you do} If you are using Minim outside of Processing, then before your program exits you must close any audio I/O classes you get from Minim and then stop your Minim instance. Audio I/O classes include AudioPlayer, AudioSample, AudioSnippet, AudioInput, and AudioOutput.

Joseph Boston In this tutorial I show you how to run an android project on your phone. I also show you some basic 3D texturing! Check it out! In this tutorial we cover the basics of 3d rendering in processing and animated some boxes. the material for this tutorial is at this address: Tutorial Material: In this tutorial I explain how to create an animated banner and explain some concepts such as: – the color function – boolean values – integers and floats – increments in value – PFont (using font) – Typography – .vlw files – Opacity and Alpha In this tutorial I explain some basic concepts about methods. Edible Data Visualization Is Food for Thought The problem with pie charts is that they’re generally light on the pie. Recently, however, designers have begun using food as a medium for representing data in the same way that they once used inedible graphs and tables. Call it food for thought: These stat-packed dishes get diners thinking about world issues by placing them directly them in their dinner. Following in the footsteps of edible interface projects like Data Cuisine or the Data Chef, Veronika Krenn and Vesela Mihaylova combine statistics and cuisine in their Taste of Data series, which recently snagged the Gabriele Heidecker Prize. The two recent graduates of the Interface Culture Lab at the University of Linz in Austria infuse these projects with plenty of tongue-in-cheek humor, using Christmas stollen to analyze holiday spending and depicting the statistics of men’s extramarital affairs with a sliced banana.

How University Construction Projects Offer Opportunities to Reform Architecture Education There is a dichotomy to the business of educating architects. While the real world profession is a collaborative field, one in which projects of even the largest and most publicly-acclaimed offices are team-led initiatives, the study of architecture is often insular, myopic, and devoid of such partnerships. Certainly there is a benefit to this style of teaching - it builds confidence for one thing - but it is troubling to think that in a socially-oriented and practically-minded field like architecture, there can be such major disconnects between the process of designing and the act of building. As many critics of current architectural education have pointed out, incorporating design-build projects into school curriculums is a pragmatic solution oriented towards correcting such imbalances.

How Companies and Services Like Facebook Are Shaped by the Programming Languages They Use When the Japanese computer scientist Yukihiro Matsumoto decided to create Ruby, a programming language that has helped build Twitter, Hulu, and much of the modern Web, he was chasing an idea from a 1966 science fiction novel called Babel-17 by Samuel R. Delany. At the book’s heart is an invented language of the same name that upgrades the minds of all those who speak it. “Babel-17 is such an exact analytical language, it almost assures you technical mastery of any situation you look at,” the protagonist says at one point. With Ruby, Matsumoto wanted the same thing: to reprogram and improve the way programmers think.