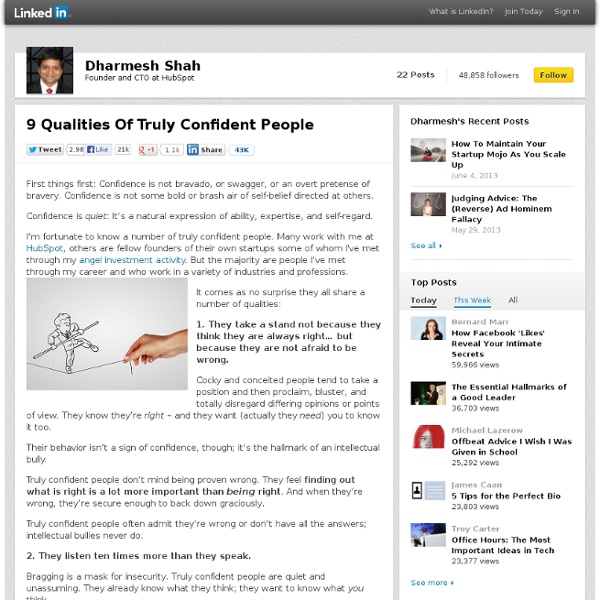 First things first: Confidence is not bravado, or swagger, or an overt pretense of bravery. Confidence is not some bold or brash air of self-belief directed at others. Confidence is quiet: It’s a natural expression of ability, expertise, and self-regard. I’m fortunate to know a number of truly confident people. Many work with me at HubSpot, others are fellow founders of their own startups some of whom I've met through my angel investment activity. But the majority are people I’ve met through my career and who work in a variety of industries and professions. It comes as no surprise they all share a number of qualities: 1. Cocky and conceited people tend to take a position and then proclaim, bluster, and totally disregard differing opinions or points of view. Their behavior isn’t a sign of confidence, though; it’s the hallmark of an intellectual bully. Truly confident people don’t mind being proven wrong. 2. Bragging is a mask for insecurity. 3. 4. Saying, “Can you help me?” 5. 6. 7. 9.

6 Harsh Truths That Will Make You a Better Person 2016, motherfuckers. Yeah! LET'S DO THIS. "Do what?" you ask. I DON'T KNOW. The Five Biggest Threats To Human Existence In the daily hubbub of current “crises” facing humanity, we forget about the many generations we hope are yet to come. Not those who will live 200 years from now, but 1,000 or 10,000 years from now. I use the word “hope” because we face risks, called existential risks, that threaten to wipe out humanity. These risks are not just for big disasters, but for the disasters that could end history. Character Strengths and Virtues The strengths and virtues[edit] CSV defined character strengths as satisfying most of the ten following criteria. Character strengths are

WE-DESIGNS.ORG We Are Hustlers, Designers, Architects, Art Directors, Academics, and Professionals. We are CREATIVES. 0Tweet 0Like 0pinterest When It's Time to Stop Thinking If you run a start-up--whether it’s for profit or a social enterprise--one of the big questions that you face every day is whether to spend more time thinking about your venture’s problems or just make a decision and take action. If you’re anything like me, you’ve been through an educational process that puts a tremendous emphasis on getting you to think hard before acting and record your thinking in exhaustive detail. Many of America’s greatest entrepreneurs, from Bill Gates to Jeff Bezos, have been through that kind of cerebrally-intensive education at Harvard and Princeton, respectively. To be sure, both institutions have evolved more to encourage their students to get real-world experience than they did when Gates and Bezos were attending them.

Why Self-Compassion Trumps Self-Esteem In this incredibly competitive society of ours, how many of us truly feel good about ourselves? I remember once, as a freshman in college, after spending hours getting ready for a big party, I complained to my boyfriend that my hair, makeup, and outfit were woefully inadequate. He tried to reassure me by saying, “Don’t worry, you look fine.” Juan Estey

Ask Hackaday: Who Wants An All DC House? Sometimes when working on a righteous hack, we get goosebumps while watching our code execute faster than we could ever possibly comprehend. Seeing the pixels of the LCD come alive, hearing the chatter of relays and the hum of fans…it’s an amazing thing what electricity can do. And it is equally amazing when you realize that it all started one hundred and thirty five years ago, when [Thomas Edison] changed the world forever with the first practical electric light bulb.

38 Vintage Conversation Rules Editor’s note: The excerpt below comes from a book published in 1875: A Gentleman’s Guide to Etiquette by Cecil B. Hartley. Hartley’s rules may be over 100 years old, but they’re just as true today as they ever were. There are some real gems here — some of which truly gave me a chuckle. Astro Studios - Blog Last Friday night in the Astro Gallery we hosted the latest installment of the Bike + Design lecture series. With the help of the SF chapter of IDSA and the California College of the Arts (CCA) we set up an exploration into innovation, culture and design of Bay Area bicycle culture. Read More... The evening came to life with talks from today’s top players in the industry, Simon Fischer and Nathan Mack of Giro laid down the history and and future of bike helmets shoes and apparel. Garrett Chow of Mash SF talked of inspiration and applications of bicycles as not only functional but awesome looking pieces of machinery.

Five trailblazing women who reinvented their brand Campbell Soup Company CEO Denise Morrison revamped brand to suit younger generationShe has also diversified the company's healthy products by acquiring Bolthouse FarmsCNN charts the evolution of five female-led food and drink brands Leading Women connects you to extraordinary women of our time. Each month, we meet two women at the top of their field, exploring their careers, lives and ideas. (CNN) -- How do you reinvigorate a heritage brand? It's a question that has long marred CEOs, business strategists and some of the world's most astute marketeers. Chief Seattle's Speech The son of the white chief says his father sends us greetings of friendship and good will. This is kind, for we know he has little need of our friendship in return, because his people are many. They are like the grass that covers the vast prairies, while my people are few, and resemble the scattering trees of a storm-swept plain.

The 6 Most Badass Skills You Can Learn in Under a Week Become a Human Lie Detector Any secret agent worth his hidden cyanide pills is going to have to be prepared for intense negotiations. Whether you've captured a deadly SPECTRE double-agent working as an MI6 janitor, or are just buying a used car, you've got to be able to tell when the enemy is lying through his teeth to you, and how to best disguise the fact that you're lying through your teeth at the same time. Also you can be like that guy in Lie to Me, for the few of you who watch that show. Is Polygamy the most logical social unit on an evolutionary basis?﻿ +Earl Hollar -- now you're getting into the can of worms that is relationship titles. Polyamorous can be anything from polygamous to whatever the people choose. Outside of religious polygamy, it's harder to say. Personally, I've got an ex-wife and ex-husband. But, being as how we live in the US that was not legal. Was that polygamous?