How to Build a Solar Heating Panel with Soda Cans 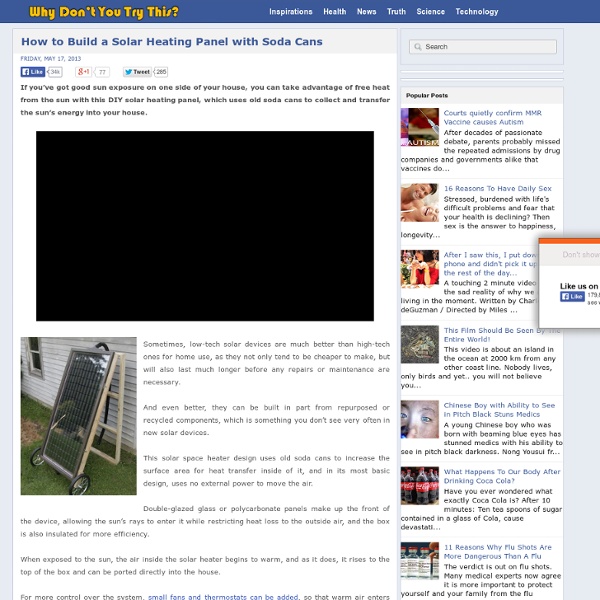 If you’ve got good sun exposure on one side of your house, you can take advantage of free heat from the sun with this DIY solar heating panel, which uses old soda cans to collect and transfer the sun’s energy into your house. Sometimes, low-tech solar devices are much better than high-tech ones for home use, as they not only tend to be cheaper to make, but will also last much longer before any repairs or maintenance are necessary. And even better, they can be built in part from repurposed or recycled components, which is something you don’t see very often in new solar devices. This solar space heater design uses old soda cans to increase the surface area for heat transfer inside of it, and in its most basic design, uses no external power to move the air. Double-glazed glass or polycarbonate panels make up the front of the device, allowing the sun’s rays to enter it while restricting heat loss to the outside air, and the box is also insulated for more efficiency. Source: Blackle Mag Related:

Animated Knots by Grog | How to Tie Knots | Fishing, Boating, Climbing, Scouting, Search and Rescue, Household, Decorative, Rope Care, Impressionism Impressionism is a 19th-century art movement that originated with a group of Paris-based artists. Their independent exhibitions brought them to prominence during the 1870s and 1880s, in spite of harsh opposition from the conventional art community in France. The name of the style derives from the title of a Claude Monet work, Impression, soleil levant (Impression, Sunrise), which provoked the critic Louis Leroy to coin the term in a satirical review published in the Parisian newspaper Le Charivari. Overview[edit] Radicals in their time, early Impressionists violated the rules of academic painting. Impressionism emerged in France at the same time that a number of other painters, including the Italian artists known as the Macchiaioli, and Winslow Homer in the United States, were also exploring plein-air painting. Beginnings[edit] In the middle of the 19th century—a time of change, as Emperor Napoleon III rebuilt Paris and waged war—the Académie des Beaux-Arts dominated French art.

Wild Ally Workbook | Food Under Foot We are excited by the response to FoodUnderFoot.com. When the Wild Edible Series was met with cries for “More!” from the rapidly growing Food Under Foot Family, we asked you to tell us what you wanted. And you did. So Melissa, David and I began planning several projects. “How do I get started?” She recommends people do what she did as an apprentice herbalist – a simple yet profoundly effective technique that plunged her intimately into the natural world. She found her Wild Plant Ally. The Ally is a plant with which you join forces, studying it throughout its life cycle, appreciating all its parts and uses. Melissa has laid out in great detail how to choose an Ally of your own, how to learn from it and how to enter more deeply in the natural world. This book is a Workbook. The Wild Plant Ally Workbook teaches you how to learn about wild edible plants. Click ABOVE PICTURE for SAMPLE of Workbook It is not a resource book. “I know you will enjoy this journey. Jason

(1) Making Nothing Happen: Yeats, Heidegger, Pessoa, and the Emergence of Post-Romanticism | James Corby Humanities 1192. Early German Romanticism German Romanticism emerged out of a crisis in philosophy. Since Descartes’s thought-experimentof radical skepticism and the consequent positioning of a reflective, self-certain subject at the heart of thought, questions of epistemology became increasingly entangled with questions of subjectivity [8–13].If the self is in a constant, reflective relationship with itself in all its cognitive operations, it canseemingly never, as it were, free itself from itself in order to know either itself in its totality or thingsas they are in themselves. failure of reflectivethought and thereby rupturing the subjectivism of thought’s finite, conceptualizing grasp, a spacemight be created in the artwork in which that which exceeds ordinary consciousness—variouslyreferred to as the absolute, being, or the unconditioned—may come forth and show itself in all of itsstrangeness and ungraspability. Wechselerweis ), a wavering ( Schweben autopoietic

sewing tutorial | KIDS | crafts | handmade gifts | bread bags | fort kits | diy hang tags | saltwater-kids My boys spend hours perched in our front window, just watching birds. They especially love putting out treats for their feathered friends. It is amazing how quiet and still a three & five year-old can be - completely memorized. So, for gifts this year we are keeping it simple - giving an experience rather than just more stuff. These molded bird seed ornaments are a lot of fun to make, and very inexpensive. I found this recipe here, and it worked great! You'll Need: 3/4 cup flour 1/2 cup water 1 envelope unflavored gelatin 3 tbsp. corn syrup 4 cups birdseed molds (muffin tin, cookie cutters, etc.) 1: Combine the flour, water, gelatin and corn syrup in a large mixing bowl. 3: Spray your mold(s) with cooking spray, and spoon birdseed mixture into each mold. Poke a hole through top of each birdseed mold using a drinking straw, making sure it goes all the way through. 4: Leave the birdseed mixture in the molds for two to three hours. 5: Cut your ribbon and carefully put it through the hole.

Mathematics in Art and Architecture Welcome to Mathematics in Art and Architecture! Course Content Additional Information Objectives of the Module The goal of the course is to study connections between mathematics and art and architecture. After taking this course you will look at the world with new eyes and notice mathematical structures around you. Topics to be Covered We start by studying tilings. Practical Information and Assessment This course is one of the new General Education Modules at the NUS. I will be away on conference leave from 6/1/04 to 12/1/04, so there will be no lectures on Tuesday 6/1 and Friday 9/1. There will be three hours of lectures and one hour of large group tutorial each week. I use a cordless microphone and walk around in class and ask questions. If you send me e-mail, please use the module code GEK1518 in the subject. The final exam counts 40% of your grade. Please do the homework in the same group as you do the project. I have a page with links to some past projects. IVLE Course Page Recommended Texts

Build a Bug Hotel A bug hotel is part garden art and part winter habitat for beneficial insects, the garden army that helps to keep the bad bugs under control. If you are an organic gardener like me, then you will want to be sure that there is a place in your garden for beneficial insects to lodge for the winter. Next spring, when they wake up, lay eggs, and sweep your plants clean of aphids and mites, you will thank me. Here is how to make one for this weekend project. Oftentimes these decorative displays of plant material intended to provide shelter to overwintering insects are called “bug hotels” or “insect houses.” Perhaps they should be called “bug hostels” because the rooms are available to all but they do need to bring their own sleeping bag. Bees Many garden bees are ground dwellers so they won’t have a need for a hotel room. Ladybugs Ladybugs like to overwinter as large groups in between dry plant material. Beetles, Spiders, Lacewings and Friends Materials Make it! 1. 2. 3. 4. Save

Mathematical Art of M.C. Escher For me it remains an open question whether [this work]pertains to the realm of mathematics or to that of art. —M.C. Escher Introduction Self Portrait, 1948 Maurits Cornelis Escher created unique and fascinating works of art that explore and exhibit a wide range of mathematical ideas. He was born in Leeuwarden, Holland in 1898, and when he was in school his family planned for him to follow his father’s career of architecture. His work went almost unnoticed until the 1950’s, but by 1956 he had given his first important exhibition, was written up in Time magazine, and acquired a world-wide reputation. Escher-like motif on a building in The Hague, Netherlands. His work eventually appeared not only in printed form, but as commissioned or imitative sculptures on public buildings, as decorations on everything from neckties to mousepads, and in software written to automate the reproduction and manipulation of tesselations. Contributors B. Citation Info [MLA] Smith, B.