Rescuing drowning children: How to know when someone is in trouble in the water 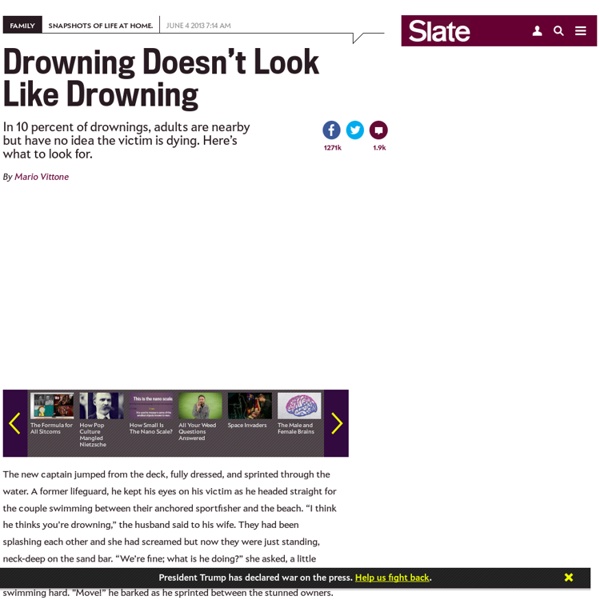 Photo by Mario Tama/Getty Images The new captain jumped from the deck, fully dressed, and sprinted through the water. A former lifeguard, he kept his eyes on his victim as he headed straight for the couple swimming between their anchored sportfisher and the beach. How did this captain know—from 50 feet away—what the father couldn’t recognize from just 10? The Instinctive Drowning Response—so named by Francesco A. “Except in rare circumstances, drowning people are physiologically unable to call out for help. This doesn’t mean that a person that is yelling for help and thrashing isn’t in real trouble—they are experiencing aquatic distress. Look for these other signs of drowning when persons are in the water: So if a crew member falls overboard and everything looks OK—don’t be too sure.

f.a.q. The information below is drawn from both more than 20 years experience and from published papers and reports. More information is available in the FogQuest Fog Collection Manual (2005), which can be purchased from FogQuest. Detailed scientific and technical information is available, in the form of many published papers, to our members in the Members’ Section of this web site. What is fog? Fog is the same as a cloud except that it touches the ground, whereas a cloud has a base that is above the ground. How much water is in fog? There is typically from 0.05 to 0.5 grams of liquid water in a cubic meter of fog. Does fog collection work in humid air? Our fog collection technology has many applications and can provide clean water in parts of the world where conventional sources are unavailable. Does it have to rain in order to collect fog? It is not necessary that there be rain in order to collect fog, though the fog collectors are also efficient rainfall collectors. Is the fog water clean?

Fog Harvesting Projects Hit The Big Time Everything old is new again. Even water. Fog harvesting, a technique used by nature and ancient civilizations to wring water out of the air, is getting a second look as modern technology tackles an age-old problem. Drought-parched communities around the world are running out of options. The technology works by creating surfaces where tiny airborne water droplets condense on a surface. For humans, the answer is mesh (we covered how MIT is borrowing the beetles’ technology for its own design). Now, the research is getting more serious, with organizations such as the nonprofit FogQuest dedicated to fog and rain harvesting in rural areas. But the technology is still in the experimental stage. The coming decades should see plenty of researchers exploring ways fog harvesting can free communities from the vagaries of drought.

Burmese-Style Tofu Recipe Mix the chick-pea flour and water together with a whisk or eggbeater. Let stand overnight, about 12 hours. Next day, strain the mixture through a thin cotton cloth slowly. Scrape out the residue from the cloth and discard it. Let the balance of the liquid settle for 3 hours. With a soup ladle, carefully remove 6 cups of liquid from the top of the mixture without disturbing the balance. Rub the bottom of a large pan with the oil. Bring to a boil the 9 cups of liquid and cook over moderate heat for 30 minutes, stirring continuously. Turn out the mixture into a tray 12x4 inches and 3 inches deep, lined with a clean, cotton cloth. To make a salad- A few pieces of tofu, some shredded cabbage, onion slices, crispy onions, and the oil, fish sauce, tamarind paste, toasted chick-pea powder ad mix everything together. To fry- Cut the tofu into 2 inch square pieces 2/3 inch thick and deep fry them in oil for a few seconds. Click on Burmese Recipes for more great recipes from Burma!

Nacatamal Before rolling: an indent in the masa was filled with rice and seasoned pork, and then covered with potato, tomato, fresh mint, olives and a few raisins. Nacatamales tied in plantain leaves ready to be steamed Using vegetarian ingredients: Tofu, cheese or seitan can be substituted for the meat or just left out. Ingredients[edit] Vegetarian option[edit] Traditionally, nacatamales are not vegetarian, as they use lard in the masa, but as vegetarianism becomes more popular, it is certainly possible to make a vegetarian nacatamal. See also[edit] References[edit] Extreme How-To: Heart Surgery - Step 3: Putting the Sternum Back Together Becoming a cardiac surgeon means getting over a huge mental block: "You've got to get comfortable putting stitches into a beating heart," Raman says. The size and strength of stitches surgeons use to repair someone's ticker can vary greatly depending on the procedure and part of the heart. When joining blood vessels–as in bypass surgery–doctors use sutures are made of polypropylene, a plastic polymer, and are as thin as a human hair. Of course, some procedures require cutting, not just stitching tissues together. The amount of time required for a heart operation can vary wildly.

Nicaragua Food Incentive Spirometer - How to Use an Incentive Spirometer An incentive spirometer is a medical device commonly used after surgery or with certain lung conditions such as COPD or asthma. As it measures how well your lungs fill up with each breath, an incentive spirometer helps exercise your lungs to help keep your alveoli (air sacs where oxygen and carbon dioxide are exchanged) inflated. The following steps will demonstrate how to properly use an incentive spirometer: Difficulty: Average Time Required: 10 times every hour while awake Here's How: Sit or lie upright in a comfortable position. Tips: If you are coughing and you have an incision, press firmly against the area with a pillow. What You Need Incentive spirometer (may require a presription from your doctor)Pillow (if you have an incision)Comfortable place to sit