Build your own Google TV Using RaspberryPi, NodeJS and Socket.io 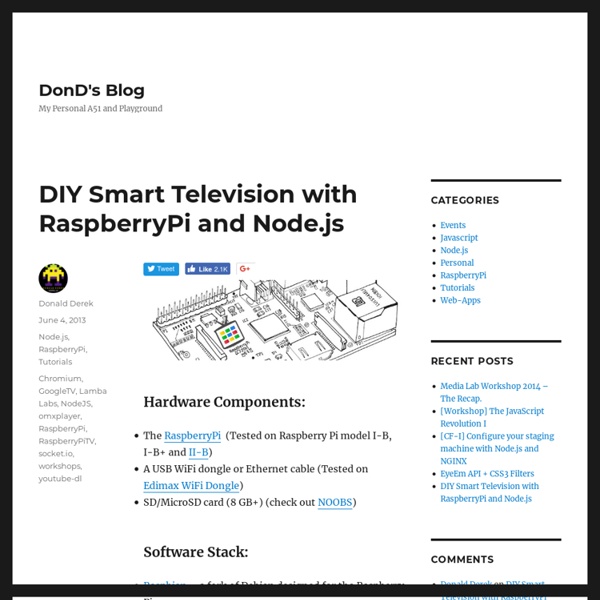 PN532 Breakout Board - Cookbook PN532 Breakout Board Adafruit offers a NFC breakout board which is also packaged as a full kit including a mbed & other parts to get you started. Getting Started¶ Wiring it up¶ First of all pinheads need to be soldered on the board's main connector as well as on the two jumpers' location. Raspberry gPIo Favorited Favorite 2 Introduction Relative to its size the Raspberry Pi is a powerhorse of a computer – it can drive HDMI displays, process mouse, keyboard, and camera inputs, connect to the Internet, and run full-featured Linux distributions. But it’s more than just a small computer, it’s a hardware prototyping tool! The Pi has bi-directional I/O pins, which you can use to drive LEDs, spin motors, or read button presses. This tutorial applies to the Raspberry Pi Model B, the Raspberry Pi Model B+ and the new Raspberry Pi 2 Model B.

Using the Raspberry Pi with a 3G modem and GPS module So… I bought a Raspberry Pi. It was really tasty, so I had to buy 300 more. Ok, so it’s not actually raspberry-flavoured and it certainly has nothing to do with pies, or the mathematical constant π either. Aurora Much robotics research in recent years has been devoted to the subject of odometry. Knowing a robot’s precise location in the world is key for navigation and obstacle detection and avoidance. Currently a number of methods are used, including wheel odometry, GPS, and SLAM systems, but each of these has flaws in its current implementation. Because wheel odometry is inherently an indirect measurement, it is only valid for short periods of time and fails completely if the vehicle is running on sand or another similarly deformable material.

SimpleCV: Installing SimpleCV on the Raspberry Pi — SimpleCV 1.3 documentation Power up the raspberry pi and log in. Connect the board to ethernet. Username: pi Password: raspberry Network should be up and running with dhcp, if not you must manually configure the network settings.Run the following command to install the necessary dependancies Raspberry Pi: Downloads This page contains download links for the GNU toolchains, as well as the model answers to each lesson. 1 GNU Toolchain 1.1 Microsoft Windows For Microsoft Windows, I use the YAGARTO and MinGW packages. Please visit the YAGARTO website and download and install YAGARTO Tools and YAGARTO GNU ARM toolchain for Windows. MinGW can be downloaded from here.

Raspberry Pi Guide - Quick Start Guide for Raspberry Pi What you will need Required SD CardDisplay and connectivity cablesAny HDMI/DVI monitor or TV should work as a display for the Pi . For best results, use one with a HDMI input, but other connections are available for older devices.

grbv @ piratery.net This tool is written in Lua, and can be modified quite easily without recompilation. Configuration files First several modules will try to read configuration files. The configuration file is named translucent = false To configure the user name used in error reports (to help me find you in my logs), you can write: