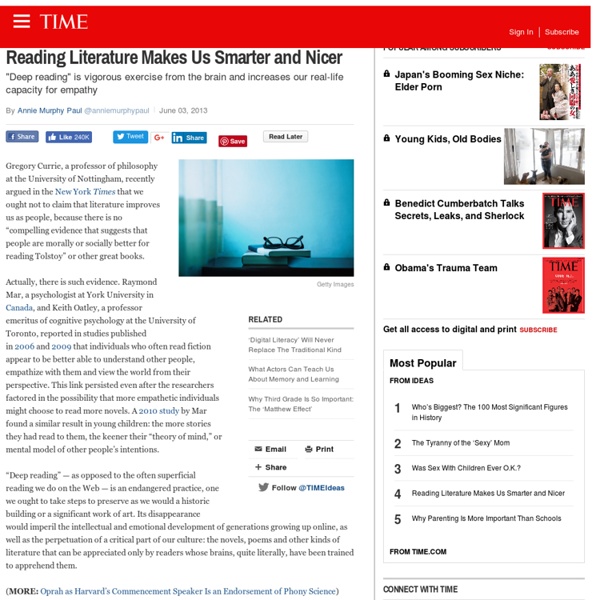 Gregory Currie, a professor of philosophy at the University of Nottingham, recently argued in the New York Times that we ought not to claim that literature improves us as people, because there is no “compelling evidence that suggests that people are morally or socially better for reading Tolstoy” or other great books. Actually, there is such evidence. Raymond Mar, a psychologist at York University in Canada, and Keith Oatley, a professor emeritus of cognitive psychology at the University of Toronto, reported in studies published in 2006 and 2009 that individuals who often read fiction appear to be better able to understand other people, empathize with them and view the world from their perspective. This link persisted even after the researchers factored in the possibility that more empathetic individuals might choose to read more novels. (MORE: Oprah as Harvard’s Commencement Speaker Is an Endorsement of Phony Science) None of this is likely to happen when we’re scrolling through TMZ.

Spearmint and Rosemary Extracts Improve Memory Rosemary for remembrance – at least that’s what the Victorian language of flowers says. Now a small study has added weight to that folklore by showing that chemicals in the essential oils of rosemary and spearmint improve learning and memory. Researchers at the University of St Louis found that the higher dose of an antioxidant extract of compounds derived from rosemary was the most powerful in improving memory and learning in animals across three tested behaviours. A lower dose of rosemary extract improved memory in two of the behavioural tests, as did a compound made from spearmint extract. Neil Gaiman: Why our future depends on libraries, reading and daydreaming It's important for people to tell you what side they are on and why, and whether they might be biased. A declaration of members' interests, of a sort. So, I am going to be talking to you about reading. I'm going to tell you that libraries are important.

Sydney Review of Books Nora Webster by Colm Tóibín Picador 320pp $29.99AU Published October, 2014 ISBN 9781743532195 It is amusing to think of Colm Tóibín and Jeffrey Eugenides being ticked off over dinner with art historians at Princeton University for, on the one hand, regurgitating social realist novels for middle-class consumers, while on the other daring to speak the ‘holy’ avant garde name of Samuel Beckett. Tóibín has told this anecdote with a degree of relish, convinced as he is, through his exhaustive reading and, in particular, his study of the exquisite dissections of Henry James, that an outwardly provocative style is not his thing. Though his new novel Nora Webster, seen through the lens of nineteenth and twentieth century ‘isms’, undoubtedly exhibits the generic traits of social realism, its plain style and its eponymous character are powerful and expertly brandished weapons.

Psychologists Identify the Best Ways to Study Education generally focuses on what you study, such as algebra, the elements of the periodic table or how to conjugate verbs. But learning how to study can be just as important, with lifelong benefits. It can teach you to pick up knowledge faster and more efficiently and allow you to retain information for years rather than days. Study: Good School Libraries Affect Test Scores Columbia, SC (WLTX) - A study released Tuesday by the South Carolina Association of School Librarians shows that the more emphasis is put on school libraries--and the learning that takes place there--the better scores students receive on standardized tests. University of South Carolina Professor Dr. Karen Gavigan outlined the studies five areas of importance at a press conference Tuesday morning. "The presence of librarians and library support staff, instructional collaboration between librarians and teachers, traditional and digital collections, library expenditures, and access to computers," she explained.

Can Reading Make You Happier? Several years ago, I was given as a gift a remote session with a bibliotherapist at the London headquarters of the School of Life, which offers innovative courses to help people deal with the daily emotional challenges of existence. I have to admit that at first I didn’t really like the idea of being given a reading “prescription.” I’ve generally preferred to mimic Virginia Woolf’s passionate commitment to serendipity in my personal reading discoveries, delighting not only in the books themselves but in the randomly meaningful nature of how I came upon them (on the bus after a breakup, in a backpackers’ hostel in Damascus, or in the dark library stacks at graduate school, while browsing instead of studying). But the session was a gift, and I found myself unexpectedly enjoying the initial questionnaire about my reading habits that the bibliotherapist, Ella Berthoud, sent me. Bibliotherapy is a very broad term for the ancient practice of encouraging reading for therapeutic effect.

Why Reading Literature in High-School English Class Should Educate the Emotions I’d drawn a little tombstone on the board. I was in the middle of leading a class of 10th-grade English students through Piggy’s death scene in Lord of the Flies: the rock, the shattered conch, Piggy’s long fall, the red stuff flowing out, the twitching legs. The corners of her eyes bubbling, a 15-year-old girl dashed for the door. When I spoke with her after class, the student explained that she identified with Piggy. Being studious, fearful of bullies, and a bit of an outsider, it upset her to casually discuss his violent death.

How to Memorize Verbatim Text If you are visiting from StumbleUpon and like this article and tool, please consider giving it a thumbs up. Thanks! Memorizing does not have to be as hard as most people make it. 20 most clever ads for books, bookstores and libraries Books are all about being smart. Ads for books are difficult to create – they have to be smart, too. On the other hand, ad agencies find books, bookshops, and libraries a very promising subject in terms of creative potential. Most of the ads in this list are spoofs, there is no doubt about it. I can’t imagine that a small bookstore could afford an expensive photo shoot, not mentioning placing a two-page ad in color magazines (most of the ads look like double-spreads). Ad agencies make these ads for their creative portfolios, to raise their creative reputation among clients and on advertising festivals.