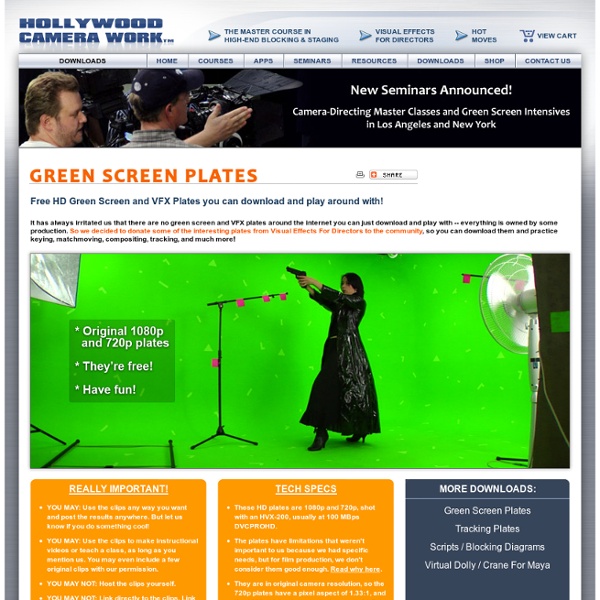 sIBL Archive Installation Each thumbnail links directly to an archived sIBL-set. Watch out, these are big downloads. Starter's sIBL-Collection Including 4 sets: apartment, empty room, backlot, office-eden Update Pack Already collected the sets as they came out monthly? License All sIBL-sets on this page, including the images within, are licensed under the Creative Commons Attribution-Noncommercial-Share Alike 3.0 License. Remember: Do what you want with them, but always mention where you got them from...

Hollywood Camera Work - Visual Effects For Directors - Intensive Green Screen training, Matchmoving, Compositing, Motion Capture and more Ready To Learn A Lot? Years in the making, Visual Effects For Directors is a massive 7 DVD set that covers everything you need to know about shooting Visual Effects. The course is intense training on everything from green screen, virtual set, 3D, camera tracking, and motion control, to character animation, motion capture, crowd replication, digital set extension, VFX cinematography, compositing, and much, much, much more. Everybody Needs It The course is completely unique, in that it's about understanding exactly what to do on the set, so that more of the budget ends up in front of the camera instead of being wasted on fixing impossible problems in post -- and trust us, it happens every day, even by big guys who should know better. This is training that everybody needs, from Directors and DPs to highly professional Visual Effects Artists, because the challenge is the same: to make some really good decisions during shooting that you know for a fact will work easily in post. Be A Know-It-All

sIBL-Edit sIBL-Edit is a standalone application. Whatever 3d app you choose for the loader scripts - sIBL Edit is the independent backbone, a complete toolkit focused on managing and editing your sIBL Collection. And it looks pretty slick, too. It’s divided in three parts, one for each task: Managing, Editing, and Creation. 1. In this browser pane you can inspect your collection and do simple management tasks: Manage your collection. You can pull up any of the included images, and have closer look here. 2. Double-clicking in the browser takes you to the main editor. Edit Pane. Everything is interactive here, the display reacts in realtime when you set exposure, gamma and image shift. Note, that all these edits are non-destructive to the images. 3. Making a new sIBL set couldn't be easier: Just drag-n-drop your original high resolution HDR panorama on the application icon. sIBL-Edit will automatically split up all the component images. Break it out, pronto! This window actually does make new images.

The Top Ten Tips of Texturing One way to create dirt has already been covered, and that's photo overlays. Those are great for general wear and tear on your texture. If you want small specific details, you'll need to use other techniques. Dust and dirt can be done very quickly with a solid brownish layer and a layer mask. Rust is a bit more tricky. I used to handpaint rust, but it always had a bit of a cartoony look, and I was never able to get crispy rust that looks convincing and real. That was until DennisPls shared his technique with me, which I've been using ever since. Good damage placement only requires one thing: logical thinking. That can be chipped paint, scratches, rust, etc. There is a sure chance that you'll find dust and dirt in such an area. This doesn't only work for small borders. The front of the forklift (1) is the area that will suffer the most, and will therefore have more damage than other parts.

BANG!  The Anatomy of Explosions MUNITIONS - the Atomic Bomb Cont. Fission bombs use an element like uranium-235 to create a nuclear explosion, the fuel must be kept in separate subcritical masses, which will not support fission, to prevent premature detonation. The two or more subcritical masses must be brought together to form a supercritical mass at the time of detonation. To bring the subcritical masses together into a supercritical mass, two techniques are used; Gun-triggered and Implosion. The bomb known as Little Boy (left) was the first nuclear weapon used in warfare dropped on Hiroshima by the B-29 Enola Gay. The Fat Man bomb was the second nuclear weapon used in warfare and was dropped on Nagasaki in 1945. Fission bombs worked, but they weren't very efficient.

PhotoSketch: Draw Sketch, get Real Images – AWESOME This is one application that can literally blow away anyone’s mind. It takes the world of Photoshop to the Next Level. All you have to do is draw a rough sketch with labels, it will try to replace those with images from the Internet with the closest match using Sophisticated Image-recognition algorithms. A true Internet image Montage. Here is an example: What you Draw ---- What you get PhotoSketch is an internet-based Cloud application that can take the rough, labeled sketch on the left and magically turn it into the REAL on the right. The basic how-it-works, is presented in a research paper [pdf]. Step 1. PhotoSketch’s blending algorithm analyzes each of these images, compares them with each other, and decides which are better for the blending process. I tired this yesterday and it was like one of the most innovative technologies i`ve seen in my life. Try again later, good luck Rating: 10.0/10 (1 vote cast)

Free EPS Viewer 3D Lighting Tutorial by Amaan Akram, www.amaanakram.com Trying to simulate a real environment in an artificial one can be a daunting task. But even if you make your 3D rendering look absolutely photo-realistic, it doesn't guarantee that the image carries enough emotion to elicit a "wow" from the people viewing it. Making 3D renderings photo-realistic can be hard. Putting deep emotions in them can be even harder. However, if you plan out your lighting strategy for the mood and emotion that you want your rendering to express, you make the process easier for yourself. The overall thrust of this writing is to produce photo-realistic images by applying good lighting techniques. Each light source can be broken down in to 4 distinct components and analyzed accordingly. I consider the abovementioned terms to be self-explanatory, but I will give some description of each in the following text. I would like to give a few examples here from the world of photography. I shall now individually describe each of the 4 components of light. fig. 5.6

Painter Sketchpad????? - PainterFactory.com Nanda, I don't know how many of you are actual computer programmers or beta testers, but what you just said isn't true. Not only did I used to live in Seattle near Microsoft's HQ, my father is a beta tester and on top of that I have friends that work at Microsoft. It doesn't provide a "look" it IS NT version 5.1 they named it XP because of 2000 users so they would upgrade. The core of the program is NT based, NT 6.0 is Vista and NT 6.1 is Windows 7. Notice the .1 scheme in XP and Windows 7? Anyways, I'm off topic and now left more frustrated as a consumer. Phillipec, thank you though for recognizing that, we do make mistakes.:)