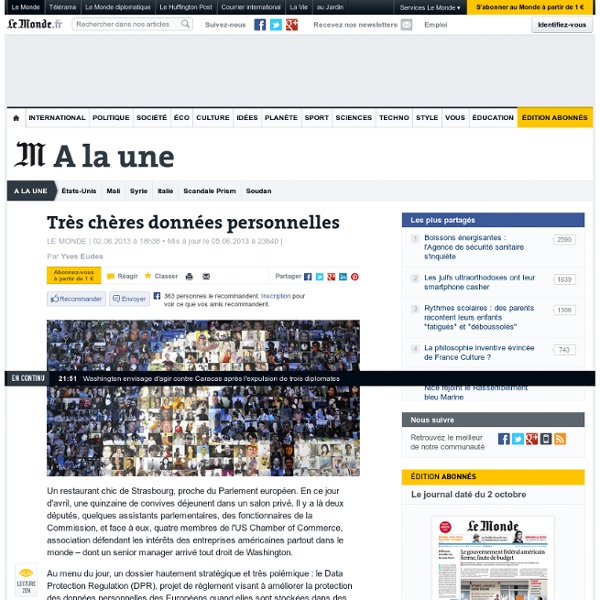 PROTECT IP Act Breaks the Internet I am writing to you as a voter in your district. I urge you to vote "no" on cloture for S. 968, the PROTECT IP Act, on Jan. 24th. The PROTECT IP Act is dangerous, ineffective, and short-sighted. It does not deserve floor consideration. I urge my representative to vote "no" on SOPA, the corresponding House bill. Over coming days you'll be hearing from the many businesses, advocacy organizations, and ordinary Americans who oppose this legislation because of the myriad ways in which it will stifle free speech and innovation.

OK Glass, RIP Privacy: The Democratization Of Surveillance How’s this for synchronicity: Google Glass started shipping on the same week that CISPA passed the House, 3DRobotics unveiled their new site, and 4chan and Reddit pored over surveillance photos trying to crowdsource the identity of the Boston bombers. Cameras on phones. Cameras on drones. Facebook Kills Social Roulette, The App With A 1/6 Chance Of Deleting Your Facebook Account If you want a digital detox, you’re going to have to pull the trigger yourself. Social Roulette is an app that would delete one in six users’ Facebook account data, but its founder confirms it’s been blocked by Facebook so it no longer functions. While there’s no specific policy prohibiting apps from deleting your data, Social Roulette is clearly counter to Facebook’s mission and business model.

NetAppVoice: 5 Lessons Business Must Learn From PRISM Thanks to stories that broke in the Washington Post and the UK’s Guardian, we now know about the U.S.’s secret Internet surveillance program, codenamed PRISM. The revelations obviously have political and intelligence implications. But there are lessons for businesses, too: Here’s what you should learn. Despite the wide media coverage, solid facts are hard to come by, but here’s what we know: The stated purpose of PRISM is to fight foreign terrorism by monitoring users’ Internet activity.

The bigger a community gets, the easier and more virulent anonymity becomes In his insightful autobiography, Red Carpets and Other Banana Skins, the actor Rupert Everett has a little paragraph about a particular Soho social world of the late 1980s. "There was a girl who called herself Princess Julia, with a voice like Eliza Doolittle, a DJ by the name of Tallulah [a man], and a pair of gay carpenters called Alan and Fritz. Everyone seemed to have fairground names: Greek Andy, Gary the Cleaner, Space Princess." What seemed a novelty in an upper room in 1989 has spread and spread. 99 Resources to Research & Mine the Invisible Web College researchers often need more than Google and Wikipedia to get the job done. To find what you're looking for, it may be necessary to tap into the invisible web, the sites that don't get indexed by broad search engines. The following resources were designed to help you do just that, offering specialized search engines, directories, and more places to find the complex and obscure. Search Engines Whether you're looking for specific science research or business data, these search engines will point you in the right direction.

Online Privacy FAQ Copyright © 2007 - 2014Privacy Rights Clearinghouse This FAQ is an addendum to our Fact Sheet 18 on Internet privacy.www.privacyrights.org/fs/fs18-cyb.htm It provides answers to questions that we are often asked by individuals who contact us concerning online privacy and safety. 1. Who will stop Google? Finally, journalists have started criticizing in earnest the leviathans of Silicon Valley, notably Google, now the world’s third-largest company in market value. The new round of discussion began even before the revelations that the tech giants were routinely sharing our data with the National Security Agency, or maybe merging with it. Simultaneously another set of journalists, apparently unaware that the weather has changed, is still sneering at San Francisco, my hometown, for not lying down and loving Silicon Valley’s looming presence. The criticism of Silicon Valley is long overdue and some of the critiques are both thoughtful and scathing. The New Yorker, for example, has explored how start-ups are undermining the purpose of education at Stanford University, addressed the Valley’s messianic delusions and political meddling, and considered Apple’s massive tax avoidance. The New York Times recently published an opinion piece that startled me, especially when I checked the byline.

NetAppVoice: PRISM: Lessons For Business Cloud Users The NSA and FBI love the cloud. If you’re using cloud computing in your business—or are considering it—has yesterday’s PRISM revelations given you pause? Should they? If the government can secretly gather data from public or hosted clouds, what does that do to the security of your valuable data? In case you’ve been living under a rock, here’s Laura Poitras and Barton Gellman, who broke this yesterday:

Glasnost: Test if your ISP is shaping your traffic The goal of the Glasnost project is to make ISPs' traffic shaping policies transparent to their customers. To this end, we designed Glasnost tests that enable you to check whether traffic from your applications is being rate-limited (i.e., throttled) or blocked. Glasnost tests work by measuring and comparing the performance of different application flows between your host and our measurement servers.