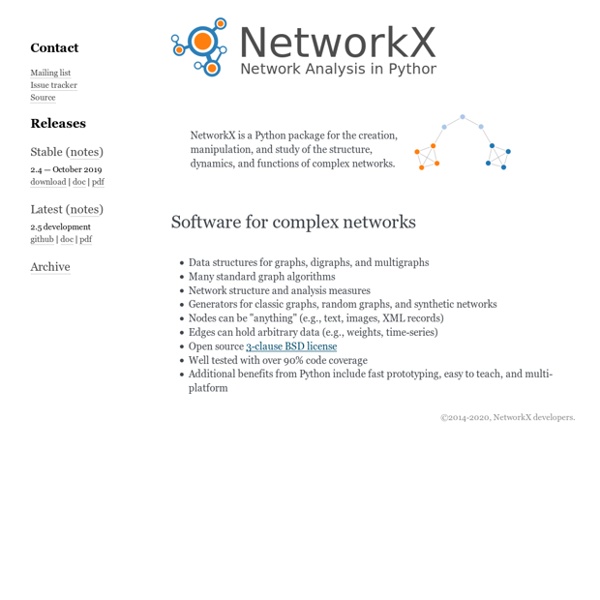 Force Directed Graphs in Javascript? on kylescholz.com :: blog Force Directed Graphs are self-organizing, visually appealing tools for representing relational data. The look is organic, because algorithms simulate the way charged particles arrange in space. They work great in user interfaces because the user has access to data nodes while the graph is being organized. Take a look (go ahead and play, they're interactive): Show Example So, what am I using these for? Recently, I've been considering alternatives to the traditional list and tree views used in search result user interfaces. Initial Findings Next Steps I need to produce some functional user interfaces. Update on Licensing: This work is licensed under a Creative Commons Attribution 2.5 License. As promised, I'm providing an open source license for the files referenced here.

NodeXL: Network Overview, Discovery and Exploration for Excel - Home Documentation Index Notice: While Javascript is not essential for this website, your interaction with the content will be limited. Please turn Javascript on for the full experience. Beginner Moderate Advanced General Python 3.x Resources Porting from Python 2 to Python 3 Can’t find what you’re looking for? >>> Python Needs You Open source software is made better when users can easily contribute code and documentation to fix bugs and add features. Contribute to Python Bug Tracker

dse 4.0.0-RC1 DSE - Simplified "bulk" insert/update/delete for Django. Version : 4.0.0 - Release Candidate #2Author : Thomas Weholt <thomas@weholt.org>License : Modified BSD.Status : BetaUrl : DSE is available for one reason - to insert/update/delete lots of data -- as fast as possible.DSE vs Django ORM: typical speed gain is around 5x-10X for updates, 3X+ for inserts.DSE is aware of default values specified in your Django models and will use those if no value is given for a field in an insert statement.DSE caches SQL-statements, both inserts, updates and delete, and executes them when a specified number of statements has been prepared or when it`s told manually to flush cached statements to the database. The actual sql execution is done using DB API cursor.executemany and this is much faster than executing SQL-statements in sequence and way faster than using the Django ORM.DSE uses a dictionary to specify what fields to work on. You got a model like: Using dse: NB!

Graph Graph Description In mathematics and computer science, graph theory studies networks of connected nodes and their properties. A graph can be used to visualize related data, or to find the shortest path from one node to another node for example. Central concepts in graph theory are: Node: a block of information in the network.Edge: a connection between two nodes (can have a direction and a weight).Centrality: determining the relative importance of a node.Clustering: partitioning nodes into groups. The NodeBox Graph library includes algorithms from NetworkX for betweenness centrality and eigenvector centrality, Connelly Barnes' implementation of Dijksta shortest paths (here) and the spring layout for JavaScript by Aslak Hellesoy and Dave Hoover (here). For those of you looking for the old Graph library built on Boost, it can still be found here. Download Documentation The library has a cool example of a visual browser for WordNet. How to get the library up and running graph = ximport("graph")

UCINET Software UCINET 6 for Windows is a software package for the analysis of social network data. It was developed by Lin Freeman, Martin Everett and Steve Borgatti. It comes with the NetDraw network visualization tool. If you use the software, please cite it. Here is a sample citation: Borgatti, S.P., Everett, M.G. and Freeman, L.C. 2002. Tutorial — python-igraph v0.6 documentation This chapter contains a short overview of igraph‘s capabilities. It is highly recommended to read it at least once if you are new to igraph. I assume that you have already installed igraph; if you did not, see Installing igraph first. Familiarity with the Python language is also assumed; if this is the first time you are trying to use Python, there are many good Python tutorials on the Internet to get you started. Mark Pilgrim’s Dive Into Python is one that I personally suggest. If this is the first time you ever try to use a programming language, A Byte of Python is even better. Starting igraph igraph is a Python module, hence it can be imported exactly the same way as any other ordinary Python module at the Python prompt: $ python Python 2.5.1 (r251:54863, Apr 15 2008, 22:57:26) [GCC 4.0.1 (Apple Inc. build 5465)] on darwin Type "help", "copyright", "credits" or "license" for more information. >>> import igraph >>> import igraph>>> print igraph. Creating a graph from scratch Warning Note

sanokore/UI-Input-Validator blog Perhaps it's subtle, but the draft spec for XMLHttpRequest calls for support for progressive response handling: 4.7.6 The responseText attribute The responseText attribute must return the result of running these steps: 1. 2. To rephrase for my purposes, responseText should return the intermediate contents of the response when an XMLHttpRequest is interrogated during the LOADING state. I ran a modified version of the streaming response tests I used in my last post to verify progressive XHR handling. For Webkit browsers, it's critical to specify a Content-Type of "text/plain" or "application/x-javascript" when returning script content to an XHR for progressive handling. Now, since we'll be interpreting partial response content as executable script, we'll need to do something to ensure that each chunk we evaluate terminates on a complete expression. window.aFunction(); // -- // window.bFunction(); // -- // Where //--// is the delimiter.