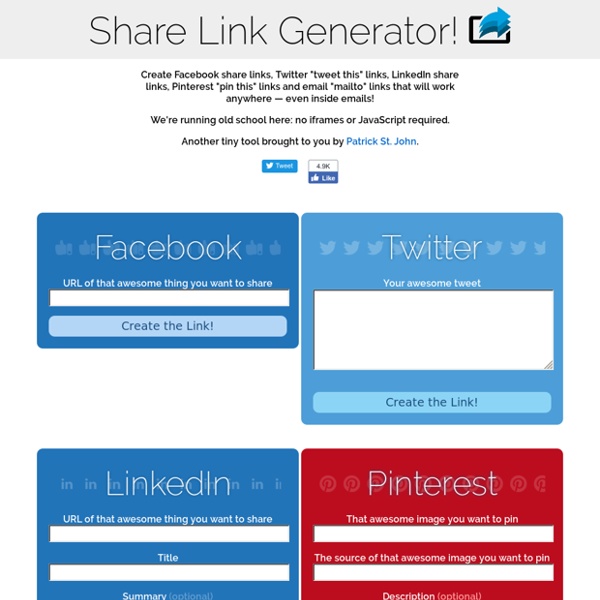 Realtime MVC Framework for Node.js back to top Sails is, of course, a web framework. But take a step back. What does that mean? Quantified Anything: Turning Google Sheets into a Backend Database The Google Docs suite is great, it offers real-time collaboration and near-feature parity with Microsoft Office (except maybe PowerPoint). One of my favorite things to do is track things, and a Google Sheets (think Excel) is perfect for the task. The question that no one is asking but I am going to answer is... "Can I use Google Sheets as a backend database to power a website?" Yes, of course you can!

300 Icons for Designers & Developers Metrize Icons is a free icon set, it works perfectly for your apps or web projects. You may use these icons for both commercial and personal projects and customize them any way you like. All Icons, WebFont and Updates are Free. Freelancer - Start Bootstrap Theme 4.3 Restoring Post.Office 3.0 Only - NT Only - My system crashed. How do I restore Post.Office from my standard, full system backup files? Once you have re-installed NT, you must re-install Post.Office on the machine by: - Running Setup.exe - Accessing Post.Office as "Postmaster" to complete the Installation Wrap-up Form After Post.Office has been re-installed, stop the Post.Office service.

Sane GitHub Labels If you work for a company that manages any part of their codebase using GitHub, or if you work in some open-source repositories with at least a few contributors, then I’m sure you’re aware of how wonderful labels can be at organizing everyone’s work. Maybe you never touch them, maybe your team already has an extensive label system in place, but regardless of how your team uses them, I think we can all agree that those seven default labels GitHub provides us with are kinda weak: So obviously they had some good ideas here, such as flagging issues with question if there is a question related to how the code works.

How to bridge rows in Foundation Most CSS grids — Foundation included — organize layout into rows that are, in turn, divided into cells or columns. But what if you want a column to extend over two rows? Officially, you’re stuck. But if we redefine the problem, a solution appears. Here’s a how you can (appear to) extend Foundation columns past one row in three minutes. 10 Best Sass Mixin Libraries for Designers Mixin Libraries for Sass? What are these and how exactly these help designers? If these questions are hovering in your mind, then you have hit the right place. We will try to help you with the topic in as simpler manner as possible. Syntactically Awesome Style Sheets widely known as SASS make it easier for designers as they have to write less CSS code and manipulate dynamically.