The Psychology of Video Games 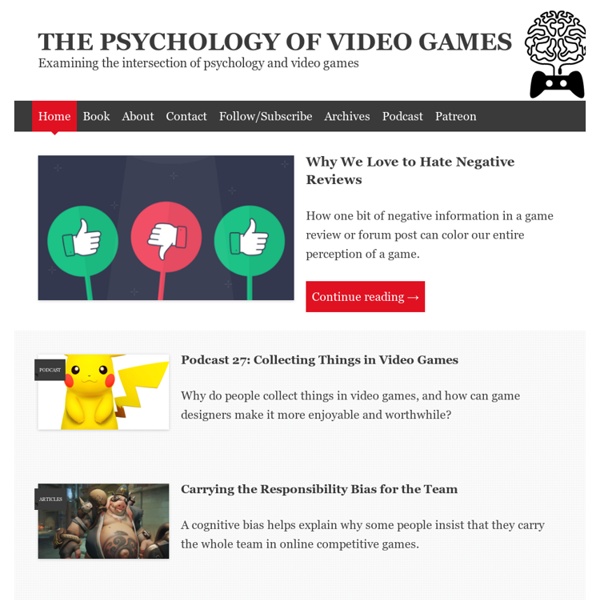 Skinner's Cubicle The subject knows that their next action might be rewarded regardless if they just received a reward. There's always that chance, and that chance as a reinforcer drives their desire for a subsequent action. This type of conditioning is the driving force behind a successful business: pathological pursuit of pleasure through action. Disregarding negative aspect models and dependent on the manner of the reinforcer there are two different forms of Variable Ratio distribution: incremental and whole.

The psychology of... Avatars Our appearance changes every day. When we get up each morning, we decide what clothes and jewellery to wear, which hairs to shave and which to style. All of this varies by occasion, and some of us make more radical alterations as well, such as getting tattoos, piercings or cosmetic surgery. In real life, though, we’re often limited in the changes we can make to appear taller, say, or more prosperous. Videogames and virtual realities, on the other hand, are more flexible.

What Makes Combat Fun I have covered a lot of different topics about combat: How to design your enemies, how to design your combat encounters, how to define the gap, and the importance of depth and breadth. This covers a lot of ground, which is great, but it is high time we grasp for the slippery opponent that is fun. What makes Combat fun? Can we even answer a question so laden with meaning? Yes, I believe we can. The Roberts Method: A Professor’s Advice for Falling in Love With Your Major November 3rd, 2010 · 32 comments Major Doubts “I’m enrolled to study computer science…a choice that was heavily influenced by my parents.”

The Psychology Of: free-to-play Currently, free-to-play games are making quite the killing in the marketplace, although it’s death by a thousand microtransactions. The idea, as the name suggests, is that you can play for free, but you can also pay for in-game conveniences, such as new content and time savers. It’s been a massive success, and the model is now something of an industry darling, much to the chagrin of certain developers. In 2010, game creator and noted essayist Ian Bogost reacted to the rise of free-to-play principles by reducing them to their essence in his tongue-in-cheek Cow Clicker.

Psychology is Fun [In this thought-provoking piece, psychology researcher and author Clark takes a look at how psychology and can must be applied to game development, to produce works that engage audiences -- offering up concrete examples of the right techniques.] Gaming's core is fun, and psychology is fun's touchstone. This article restricts itself to psychology's most foundational, most immediately-applicable methods for crafting sticky, captivating experiences. From behaviorism's methods for structuring overpowering rewards, to motivational theories on generating wants and needs, to hybrid theories like flow, it is no longer fiscally responsible for games companies to shun psychology. Let's jump right in. Pleasure first, and then, excuse from pain, shape every move that we will ever make -- so say the behaviorists.

A Dictionary of Video Game Theory Preface This dictionary of video game theory is a companion to my book, Half-Real. With the dictionary, I hope to provide a resource for students, researchers, teachers, and game players looking for terminological clarifications and pointers to further reading. A list of works cited can be found at the bottom of the page. The psychology of... Genres Genres, and debate surrounding them, are nothing new. When gamers disagree on these labels, it can result in diatribes, appeals to dogma, and even existential crises in extreme cases. To which genre do the Deus Ex games belong? Is thirdperson shooter a full genre or merely a sub-genre? Is that the same as a so-called ‘character action game’?

The psychology of... Nostalgia Do you remember Odysseus, the protagonist of Homer’s 2,800-year-old epic poem The Odyssey? Well, he’s more relevant than you might think to all these modern reboots of older franchises, such as XCOM: Enemy Unknown and Baldur’s Gate: Enhanced Edition. As researcher Tim Wildschut and his colleagues note in Nostalgia: Content, Triggers, Functions (published in the Journal Of Personality And Social Psychology), Odysseus’s ordeal is a good illustration of nostalgia as it was originally conceived. Benign vs Malicious Jealousy  Posted on Sep 05, 2011 by Michael Gugel in Gaming, Psychology Benign vs Malicious Jealousy People expect the world to be fair. If you work hard, you’ll be rewarded for your efforts. If you’re lazy, you won’t get much.

The psychology of... High scores During the heyday of the coin-operated videogame arcade, there was little better than seeing our name – well, our initials at least – in lights on a game’s high score list. And it was agonising to see it fall off the bottom, replaced by smug strings of characters representing those who had often accrued mere handfuls of points more. Friendly rivalries led us to feed coin after coin into machines such as Dig Dug , Donkey Kong and Pole Position just so that we could provide incontrovertible evidence that our skills trumped those of our friends. The proof was right there on the screen – at least until the arcade attendant unplugged the cabinet at the end of the night. Games have evolved a lot since then, but the concept of comparing our performance against others has remained. These days, however, leaderboards often replace high score tables, and we can make even more granular comparisons via achievements and trophies.

Features - Persuasive Games: Familiarity, Habituation, and Catchiness [In his latest 'Persuasive Games' column, author and game designer Ian Bogost looks at why we should repeal Bushnell's Law and move from 'addiction' to 'catchiness' in our framing of video games.] Here's a game design aphorism you've surely heard before: a game, so it goes, ought to be "easy to learn and hard to master." This axiom is so frequently repeated because it purports to hold the key to a powerful outcome: an addicting game, one people want to play over and over again once they've started, and in which starting is smooth and easy. It's an adage most frequently applied to casual games, but it is also used to describe complex games of deep structure and emergent complexity. In the modern era, this familiar design guideline comes from coin-op.