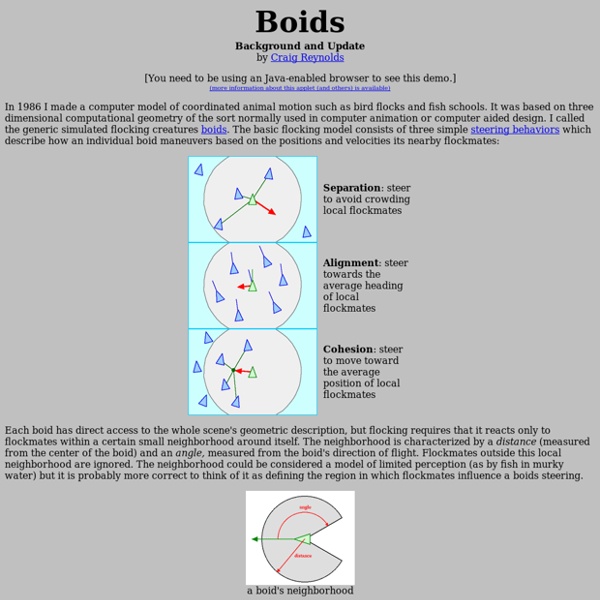 In 1986 I made a computer model of coordinated animal motion such as bird flocks and fish schools. It was based on three dimensional computational geometry of the sort normally used in computer animation or computer aided design. I called the generic simulated flocking creatures boids. The basic flocking model consists of three simple steering behaviors which describe how an individual boid maneuvers based on the positions and velocities its nearby flockmates: Each boid has direct access to the whole scene's geometric description, but flocking requires that it reacts only to flockmates within a certain small neighborhood around itself. a boid's neighborhood A slightly more elaborate behavioral model was used in the early experiments. In cooperation with many coworkers at the Symbolics Graphics Division and Whitney / Demos Productions, we made an animated short featuring the boids model called Stanley and Stella in: Breaking the Ice. Online resources related to boids Software Boids C++ Boids

Frank Frazetta Gallery Improvisation ComedySportz Austin performing a shortform game based on direction from the audience with the help of Red Dirt Improv; in this case spoofing a hard rock band performing a song made up on the stage Improvisation is a state of being and creating action without pre-planning. This can be when an individual or group is acting, dancing, singing, playing musical instruments, talking, creating artworks, problem solving, or reacting in the moment and in response to the stimulus of one's immediate environment and inner feelings. Skills and techniques[edit] The skills of improvisation can apply to many different abilities or forms of communication and expression across all artistic, scientific, physical, cognitive, academic, and non-academic disciplines. Techniques of improvisation are widely used in training for performing arts or entertainment; for example, music, theatre and dance. Music[edit] A few pianists[who?] Theatre[edit] Dance[edit] Comedy[edit] Poetry[edit] Magic Improvisation[edit] Film[edit]

RoboChamps Craig W. Reynolds My interests center around using procedural models (computer programs) to simulate complex natural phenomenon. These models can aide scientific understanding of the natural system. They also allow us to recreate the phenomenon and control it for use in animation, games and the arts. Much of my work involves writing software to simulate various types of human and animal behavior. These programs control the actions of autonomous characters in virtual worlds. I am also interested in using evolutionary computation to design procedural models, such as for behavioral control and texture synthesis. I work as a software engineer at RightHook in San Jose, California.

Chuck Redux An Interview with Douglas R. Hofstadter, following ''I am a Strange Loop'' Douglas R. Hofstadter is best-known for his book Gödel, Escher, Bach (GEB for short). In his latest book, I am a Strange Loop, he visits once again many of the themes originally presented in that book. The interview below was conducted in September 2007 and was originally published, in Hebrew, in the online culture magazine Haayal Hakore. The interview was conducted by Tal Cohen and Yarden Nir-Buchbinder. The first part of I am a Strange Loop reads like a condensed version of GEB, by explaining the idea of consciousness as a strange loop. I certainly did not believe intelligent machines were just around the corner when I wrote GEB. Am I disappointed by the amount of progress in cognitive science and AI in the past 30 years or so? I am a deep admirer of humanity at its finest and deepest and most powerful — of great people such as Helen Keller, Albert Einstein, Ella Fitzgerald, Albert Schweitzer, Frederic Chopin, Raoul Wallenberg, Fats Waller, and on and on. We'll return to Kurzweil soon.

probotics.wordpress Culebra Culebra.NET is a 2D|3D Multi Object Behavior library written in C# (Wrapper around Culebra Java library) focused on hybrid system interactions with custom Visualization, Data, and performance features. It contains a collection of objects and behaviors for creating dynamic multi agent interactions. For more information see the Culebra Java Library. The Culebra grasshopper plugin was rewritten to implement a slew of new behaviors through the use CulebraData.dll which is a wrapper around the Culebra Java Library. Culebra contains the following features: Behaviors - Components controlling system behavior Flocking Behavior – Flockers Behavior Type Class Implements Flock Behavior Interface. For questions and/or discussions please visit Grasshopper Culebra Group Demo Files, Videos & Project Information : Please use the Demo Files Included in the installer which will be automatically placed in the Culebra_2 Folder in your documents - Demo_Files To Install: Contact Info: luis@complicitMatter.com

The Boids have been around for many years - and of course, many interesting developments have happened from the seed programme. by pauljacobson Dec 18

very interesting, passing this on to our programmers by dcoda Dec 18

There are little Java programs around that let you see rabbits eat a lot of grass etc etc. Discover parallel processing and you start to get in touch with what the Universe does naturally on a grand scale. by pauljacobson Dec 18