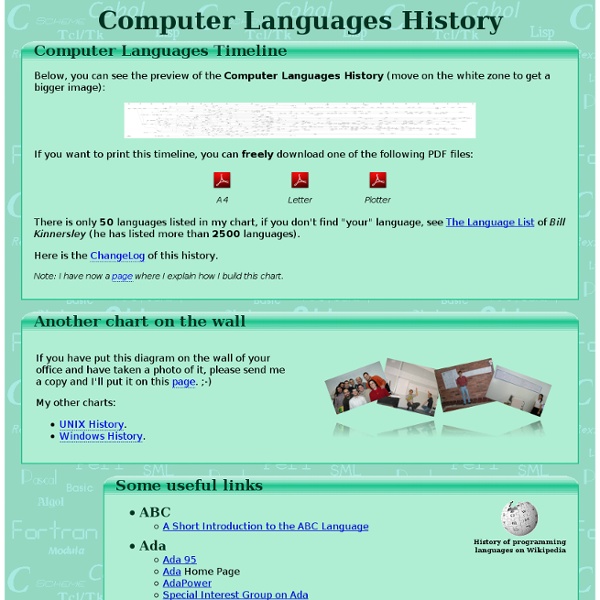 Below, you can see the preview of the Computer Languages History (move on the white zone to get a bigger image): If you want to print this timeline, you can freely download one of the following PDF files: There is only 50 languages listed in my chart, if you don't find "your" language, see The Language List of Bill Kinnersley (he has listed more than 2500 languages). Here is the ChangeLog of this history. Note: I have now a page where I explain how I build this chart.

Holding a Program in One's Head August 2007 A good programmer working intensively on his own code can hold it in his mind the way a mathematician holds a problem he's working on. Mathematicians don't answer questions by working them out on paper the way schoolchildren are taught to. They do more in their heads: they try to understand a problem space well enough that they can walk around it the way you can walk around the memory of the house you grew up in. At its best programming is the same. Up and Down the Ladder of Abstraction In real life, you would never use a ladder that only let you go up. Likewise, when creating abstractions, stepping down is as important as stepping up. Here, we take the abstraction from the previous section, and overlay a concrete representation on top of it. That is, we draw the trajectory that represents all time, but we also draw the car at some particular time.

LURCH Explanation[edit] Conventional algorithms[edit] Conventional algorithms for exploring a system's state space are deterministic, in that they have specific decision paths for mapping inputs to outputs. Nondeterministic algorithms, on the other hand, do not have such specific paths, allowing for the same inputs to result in different outputs. Invent Your Own Computer Games with Python - Learn how to program with a free ebook programming tutorial Chapter 1 Read online: Chapter 1 - Installing Python Videos:

David Dodds Natural Language Processing with Numeracy Competency This page of my BNR eBook site is dedicated to my NLP system that I have been working on for over two years. About half a year ago now I decided that I was going to add a Numeracy Competency capability to my NLP system, so that it could handle math concepts used in natural language, technology, and in Science. I was motivated by Jean Piaget’s writings about the conceptualization (growth) in children, and also by a want to be able to have my NLP system read and solve math word problems. Additionally I was motivated to provide the text based system to be able to “see” “read” and otherwise deal with mathematical notation, which has a bunch of symbols not present in ordinary text, and hence not even “visible” to most NLP systems. I was motivated to provide that because I wanted to be able to have my NLP system read Physics, Astronomy and science and technical articles. The articles are copywrited.