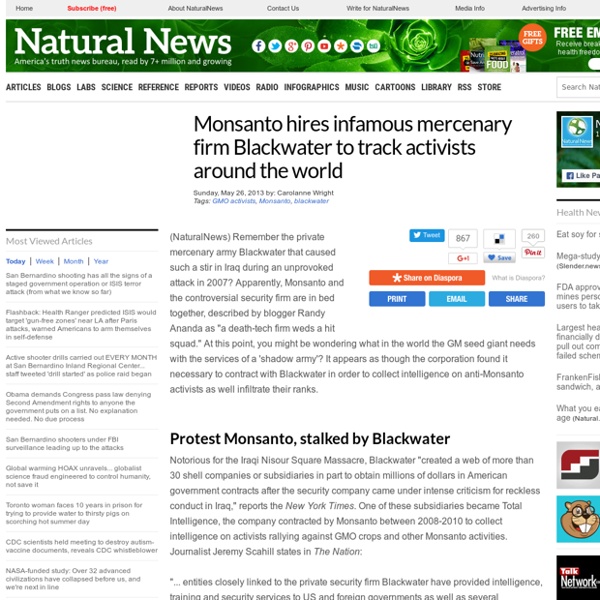 (NaturalNews) Remember the private mercenary army Blackwater that caused such a stir in Iraq during an unprovoked attack in 2007? Apparently, Monsanto and the controversial security firm are in bed together, described by blogger Randy Ananda as "a death-tech firm weds a hit squad." At this point, you might be wondering what in the world the GM seed giant needs with the services of a 'shadow army'? It appears as though the corporation found it necessary to contract with Blackwater in order to collect intelligence on anti-Monsanto activists as well infiltrate their ranks.Notorious for the Iraqi Nisour Square Massacre, Blackwater "created a web of more than 30 shell companies or subsidiaries in part to obtain millions of dollars in American government contracts after the security company came under intense criticism for reckless conduct in Iraq," reports the New York Times. As the plot continues to thicken regarding Monsanto's tactics of domination, Ananda aptly notes: "... Related:  Monsanto

Blackwater's Black Ops | The Nation# Internal documents reveal the firm's clandestine work for multinationals and governments. Over the past several years, entities closely linked to the private security firm Blackwater have provided intelligence, training and security services to US and foreign governments as well as several multinational corporations, including Monsanto, Chevron, the Walt Disney Company, Royal Caribbean Cruise Lines and banking giants Deutsche Bank and Barclays, according to documents obtained by The Nation . Blackwater's work for corporations and government agencies was contracted using two companies owned by Blackwater's owner and founder, Erik Prince: Total Intelligence Solutions and the Terrorism Research Center (TRC). Prince is listed as the chairman of both companies in internal company documents, which show how the web of companies functions as a highly coordinated operation. About the Author Jeremy Scahill Also by the Author What relationship Prado's CCG has with the CIA is not known.

MONSANTO Now Owns BLACKWATER A report by Jeremy Scahill in The Nation (Blackwater’s Black Ops, 9/15/2010) revealed that the largest mercenary army in the world, Blackwater (now called Xe Services) clandestine intelligence services was sold to the multinational Monsanto. Blackwater was renamed in 2009 after becoming famous in the world with numerous reports of abuses in Iraq, including massacres of civilians. It remains the largest private contractor of the U.S. Department of State “security services,” that practices state terrorism by giving the government the opportunity to deny it. Many military and former CIA officers work for Blackwater or related companies created to divert attention from their bad reputation and make more profit selling their nefarious services-ranging from information and intelligence to infiltration, political lobbying and paramilitary training – for other governments, banks and multinational corporations. * The author is a researcher at ETC Group Eddie (2112 Posts)

98 Organizations Oppose Obama's Monsanto Man, Islam Siddiqui, for US Agricultural Trade Representative A large coalition of groups – including the Organic Consumers Association – has been fighting since the fall to block Obama's nomination of CropLife/biotech industry rep and former pesticide lobbyist, Islam Siddiqui, to the position of Chief Ag Negotiator at the US Office of the Trade Rep. The nomination was approved by the Senate Finance Committee, but is stalled in the Senate. It could go to a Senate floor vote any day now. Dear Senator: The following 98 organizations are writing you to express our opposition to the nomination of Islam Siddiqui as Chief Agriculture Negotiator at the office of the United States Trade Representative. Siddiqui’s record at the U.S. The United States urgently needs a trade negotiator who understands that current trade agreements work neither for farmers nor the world’s hungry. We call on the Senate to reject Islam Siddiqui’s nomination and reorient trade policy to serve the interests of family farmers, farmworkers, consumers and the planet. Sincerely,

P.A.N.D.A. People Against The NDAA | Declaring independence from tyranny since 1776 Monsanto Has Taken Over the USDA The U.S. Department of Agriculture has been taken over by an outside organization. RootsAction has launched a campaign demanding a Congressional investigation. The organization is called Monsanto. Monsanto is, of course, the world's largest biotech corporation. This chemical company -- responsible for environmental disasters that have destroyed entire towns, and a driving force behind the international waves of suicides among farmers whose lives it has helped ruin -- has monopolized our food system largely by taking over regulatory agencies like the U.S. A recent study links Roundup to autism, Parkinson's, and Alzheimer's. While Hungary has just destroyed all Monsanto genetically engineered corn fields, the USDA takes a slightly different approach toward the chemical giant. The takeover has been thorough. Islam Siddiqui, a former Monsanto lobbyist, wrote the USDA's food standards, allowing corporations to label irradiated and genetically engineered foods as "organic."

5 most horrifying things about Monsanto by April M. Short Source: alternet.org By: April M. Short Source: Alternet May 2013 | Fed up with the fact that she has to spend “a small fortune” in order to feed her family things she says “ aren’t poisonous,” Tami Canal of Utah has organized a global movement against the giant chemical and seed corporation Monsanto. Canal, who has a 17-month-old baby and a six-year-old girl, cites concerns over public health, adverse affects on the environment, and political corruption as her motivation to organize against the biotech giant. “Not only are they threatening our children and ourselves as well, but also the environment,” Canal says. What started as one mother’s call to action on a Facebook page has become a movement with more than 400 demonstrations scheduled in 50 countries and 250 cities around the globe. One of the short-term goals of the march, Canal says, is to spread immediate awareness about the offenses Monsanto commits. 1. 2. Monsanto exerts vast control over the seed industry.

The internet is a threat to human civilization: Julian Assange’s A Call to Cryptographic Arms | via P2P Foundation | Social Network Unionism The following is excerpted from Cypherpunks: Freedom and the Future of the Internet, by Julian Assange with Jacob Appelbaum, Andy Müller-Maguhn and Jérémie Zimmermann. OR Books, New York, 2012, Pages 1-7. – Julian Assange, London, October 2012: “This book is not a manifesto. The world is not sliding, but galloping into a new transnational dystopia. These transformations have come about silently, because those who know what is going on work in the global surveillance industry and have no incentives to speak out. While many writers have considered what the internet means for global civilization, they are wrong. No description of the world survives first contact with the enemy. We have met the enemy. Over the last six years WikiLeaks has had conflicts with nearly every powerful state. What is to be done? Once upon a time in a place that was neither here nor there, we, the constructors and citizens of the young internet discussed the future of our new world. But we discovered something.

Monsanto Stock in Danger, Investor Warns | Markets (Before It's News) I was shocked to read a story in Canada’s highly conservative national newspaper, The Globe and Mail, a couple of days ago in which well-known investor and columnist Chris Umiastowski, P.Eng., MBA, warned of the risk in holding Monsanto stock. It was refreshing to read the views of an investor who is not just concerned about the bottom line but also the potential health and environmental risks in such a conservative paper. I knew that this was a victory-of-sorts for all of us who share a concern over the increasingly genetically-modified nature of our food supply. In his column, “Monsanto: A food stock with a bad aftertaste,” he shares: “it’s just as important to know what stocks to avoid as it is to know which ones to invest in. But back to the article I read: This investor admits that he normally writes about technology stocks and trends, adding “you may not realize that what we feed ourselves and our families has a lot of biotechnology baked into it.” Mr.

Food Inc. - Monsanto » Vote Obama For Unaccountable Drone Warfare. Vote Romney For Unaccountable Drone Warfare. Alex Jones Both candidates agree, secret kill lists and unaccountable CIA ‘double tap’ drone strikes are necessarySteve Watson Infowars.com Oct 23, 2012 Last night’s debate highlighted the fact that Barack Obama and Mitt Romney are in full agreement with each other that secret unmanned US missile strikes, documented to have killed thousands of innocent people, are “necessary” and “right “. When Romney was asked about the US policy of drone strikes in Pakistan and elsewhere, he responded: “Well, I believe that we should use any and all means necessary to take out people who pose a threat to us and our friends around the world. And it’s widely reported that drones are being used in drone strikes, and I support that entirely and feel the president was right to up the usage of that technology, and believe that we should continue to use it, to continue to go after the people who represent a threat to this nation and to our friends.” And Mitt Romney “supports that entirely.” Tags: drones, foreign affairs

Monsanto’s Dirty Dozen: The 12 Most Awful Products Made By Monsanto When you take a moment to reflect on the history of product development at Monsanto, what do you find? Here are twelve products that Monsanto has brought to market. See if you can spot the pattern… #1 – Saccharin Did you know Monsanto got started because of an artificial sweetener? After mounting pressure from consumers, the Calorie Control Council[5], and manufacturers of artificial sweeteners and diet sodas, along with additional studies[6] (several conducted by the sugar and sweetener industry) that reported flaws in the 1970s studies, saccharin was delisted from the NIH’s Carcinogen List. #2 – PCBs During the early 1920s, Monsanto began expanding their chemical production into polychlorinated biphenyls (PCBs) to produce coolant fluids for electrical transformers, capacitors, and electric motors. After another decade of studies, the truth could no longer be contained: the U.S. #3 – Polystyrene #4 – Atom bomb and nuclear weapons #6 – Dioxin #7 – Agent Orange (Think that can’t happen here?