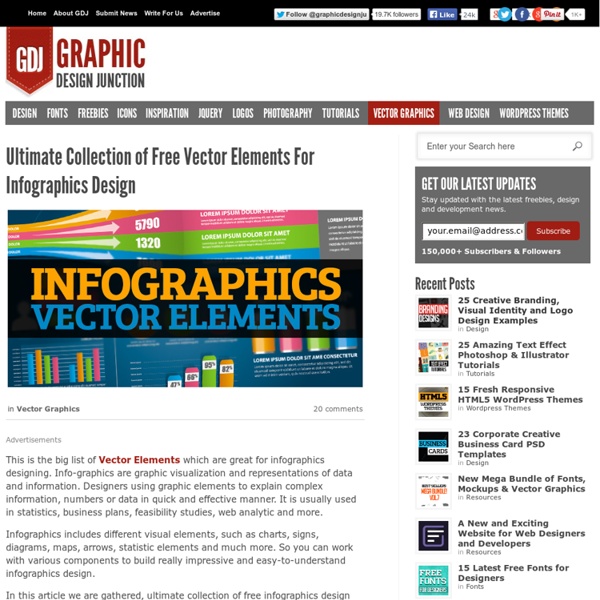 This is the big list of Vector Elements which are great for infographics designing. Info-graphics are graphic visualization and representations of data and information. Designers using graphic elements to explain complex information, numbers or data in quick and effective manner. Infographics includes different visual elements, such as charts, signs, diagrams, maps, arrows, statistic elements and much more. In this article we are gathered, ultimate collection of free infographics design vector elements and vector graphics which will surely help you in your design process. You may be interested in the following modern trends related articles as well. Subscribe to our RSS via email, simply enter your email address & click subscribe. Vector graphics is based on images made up of vectors (also called paths, or strokes) which lead through locations called control points. You may also check our earlier posted free vector art and vector graphics ideal for your designs. Download Vector Elements

Julian Frost | This is not ADVERTISING “Dumb Ways to Die”, is an integrated advertising campaign designed to curb the number of train-related deaths in Victoria. The campaign is centred around a three-minute animated music video, highlighting the many dumb ways there are to die, with being hit by a train – a very preventable death – among them. The video and iTunes single are accessible online at DumbWaysToDie.com, with animated gifs being released on Tumblr, on radio, in posters on small and large space outdoor and throughout the Metro Trains network, with the lyrics to the song on the art work. The Idea: Safety PSAs are gloomy and tedious and largely ignored by young people hardwired to resist them—except when they’re irresistibly fun and impossible not to share with friends. McCann Australia managed just such an evolution of the genre with “Dumb Ways to Die” its animated train-safety spot for the Melbourne Metro. Australian musician Ollie McGill from the band The Cat Empire wrote the music.

400+ Free Photoshop Stripe Patterns Pattern as a background graphics in web design very popular right now and fortunately there are tons of free Photoshop patterns as freebies available on the internet. Working with textures is difficult, but all professional designers global choose this way to add vigor in their designs and to demonstrate their creative skills. In this collection we are show bunch of 400+ free Photoshop stripe patterns for designer’s library. These stripe patterns are ideal for creating backgrounds and you can use them in a website, leaflet, poster, cards, etc. Here you will find a many different kinds so you can get the ones you like. Enjoy! Don’t forget to subscribe to our RSS-feed and follow us on Twitter and Facebook for recent updates. Free Striped Patterns 30 Patterns Colorful Striped 26 patterns Seamless Carbon Fiber 4 patterns Pink 18 patterns Blue Pattern Pack 8 patterns Photoshop Seamless Stripes 13 patterns Seamless Tiling Patterns 28 patterns Textured Stripes Patterns 6 patterns Stripes 10 patterns