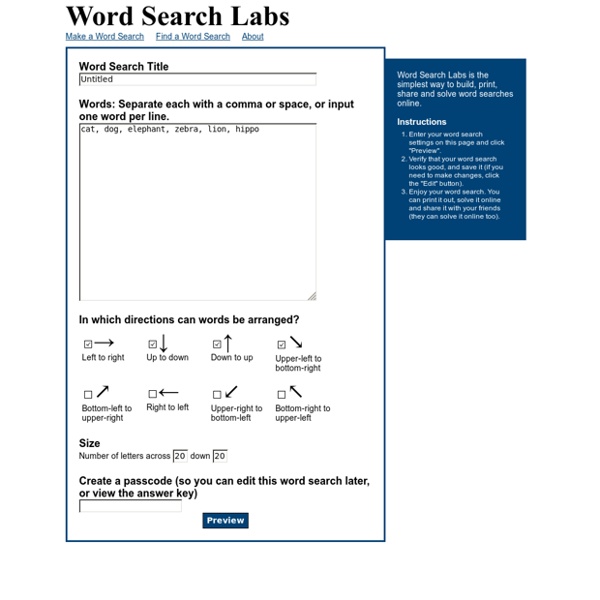 Alphametic Puzzle Generator Note: The following link is a much faster version of this puzzle generator written in C++ instead of Perl. The current page is still available in case the other is unreachable. Fast Alphametic Generator This page will allow you to search for alphametic puzzles (for a description of what they are and for some examples, see my alphametics page) among a group of words. These puzzles are rare, but given a number of words to use, it's not unusual to find one or two. Note: This page was down for nearly a year due to my ISP's change to new servers that don't support running C programs on with web-hosted software. The generator will search for puzzles among all the permutations of the words given and find all puzzles conforming to the specified parameters. You need to enter at least three words (two if you allow duplication), or there won't be enough options for summands and a sum. Example: Look for puzzles among the names of the planets where the word 'planets' is the sum. Back to my homepage.

Testmoz - The Test Generator index (CNN) — If British food has come in for a bit of mockery over the years, it isn't because the recipes are wrong, it's because they're misunderstood. We call sausages "toads." We cover offal in gravy, wrap it in pastry and call it a "pudding." We eat eels! Real, no foolin' eels! None of it really makes sense to the casual observer. Eating British food is not just eating: it is a surrealist expedition into a magical parallel universe that will challenge almost everything your eyes, your palate and your gut know to be right and proper. These are some of the classic British dishes: The Full English Full English minus the extra offal Suzanne Plunkett/CNN We're not about to claim that we're the only nation that eats eggs and fried pork products in some form for breakfast. But we would humbly suggest that we've taken the whole notion of the "cooked breakfast" to more ambitious places than anyone else would probably dare. See also: The Full Scottish. Yorkshire pudding Available on prescription. Scotch egg

Crossword Puzzle Maker You must have an OLD browser. The old crossword maker doesn't allow all of the new features like cool fonts, adding images, shadows, special colors, and much more coming in the furture like saving, and being playable online. You can upgrade your browser to IE 9+ or better yet, get the Google Chrome browser and enjoy all of those great features. Not convinced? You can go to the old version by clicking choosing it below. 2 reasons crosswords will not generate: 1. 1. Take the following example word list: "home, cat, dog". A slightly different impossible list: "home", "dog", "lizard" - all 3 have letters that they share! When you add a bunch of words, the chance for it being an impossible can increase (depending on many factors). 2.

Super Teacher Tools Shakespeare William Shakespeare was a poet and a playwright and is widely regarded as the greatest writer in the English language. He was born in Stratford-upon-Avon, in central England, in 1564 and he died in 1616. His surviving work consists of 38 plays, 154 sonnets and some other poems. He is best known for his plays, which have been translated into every major language and are performed more than those of any other playwright in the world. When William Shakespeare was 18 years old he married Anne Hathaway, and they had three children. Shakespeare’s work is still very popular today. Here is a selection of Shakespeare’s plays. The Merchant of Venice This play is about the idea that people usually get what they deserve in the end, good or bad. Hamlet This play is about revenge and also about how difficult it is to take action sometimes, even when it is important. As You Like It This play is a comedy about romantic love. Henry V Which play would you like to see?