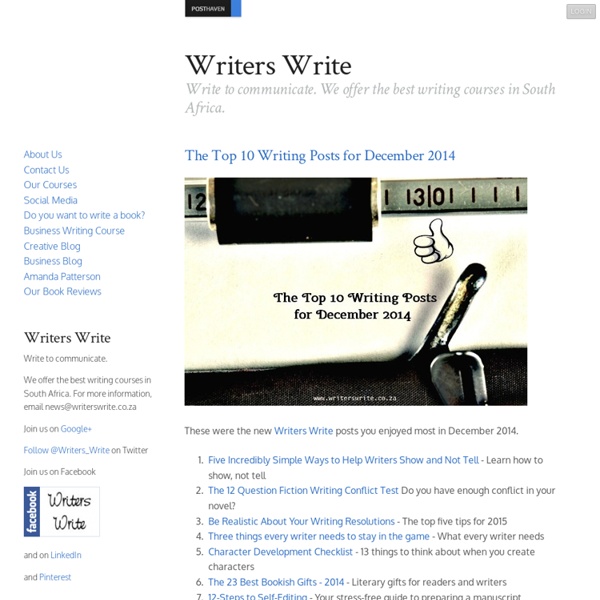 Body Language: An Artistic Writing Tool By Sharla Rae Have you ever people-watched and tried to guess by facial expressions and body movements what people are feeling or thinking? This non-verbal communication of emotion, state of mind or state of physical well-being is known as body language. 12 Useful Websites to Improve Your Writing by Johnny Webber 1. Words-to-Use.com – A different kind of thesaurus. 2.

Robin Black How did you become a writer? I took a super circuitous route. Growing up, I wanted to be an actress and a singer, ambitions that I dropped the second I arrived at Sarah Lawrence and saw the theater kids there. They were so sophisticated, so cool, I nearly died of social anxiety, and gave up before I began. (My decision-making skills are not always the best.) In my sophomore year, I took a fiction writing class with Allan Gurganus and very quickly became convinced that this was the new path for me – but then, again, various anxieties intervened, and I took a nearly twenty year detour during which time I married, divorced, remarried, had three kids, lost two pregnancies in emotionally devastating ways, and spent a lot of time mad at myself for letting go of one dream after another.

Free Printables for Writing Your Novel Are you interested in writing a novel but you don’t want to start? Do you learn by doing? Do you want easy-to-use worksheets to help novel writing made sense? I’ve pulled together a ton of FREE Printables for you. E. Cobham Brewer The Reverend Dr. Ebenezer Cobham Brewer (10 May 1810, Norwich[1] – 6 March 1897, Edwinstowe, Nottinghamshire), was the compiler of Brewer's Dictionary of Phrase and Fable, and The Reader's Handbook, Victorian reference works. Education and travels[edit] E. Karl Ove Knausgaard, the Author of 'My Struggle,' on the Power of Short Stories By Heart is a series in which authors share and discuss their all-time favorite passages in literature. See entries from Jonathan Franzen, Amy Tan, Khaled Hosseini, and more. Karl Ove Knausgaard isn’t known for being brief. My Struggle—his celebrated six-volume, 3,600-page autobiographical novel—is an experiment in radical scope, a kind of literary ultra-marathon. How long can a narrator extend a moment?

The 12 Question Fiction Writing Conflict Test As I wrote in 17 Ways To Make your Novel More Memorable, you need to structure your book as a roller-coaster ride. It should be a physical journey that forces your reader to vicariously experience a series of emotions. Pace it. Give us moments of respite and then throw us back into the action. You need to give your protagonist and your antagonist story goals. What they're reading in Germany One of the biggest recent news stories in Germany involved a plagiarism scandal that brought down the defence minister, Karl-Theodor zu Guttenberg. Perhaps this is a fitting moment, therefore, to recall another case of plagiarism that rocked the literary world at the beginning of 2010. The debut novel by the Berlin author Helene Hegemann, who was 18 at the time, had the unusual title of Axolotl Roadkill and made headlines with its depiction of a teenage girl's drug-addled adventures in Berlin's club scene. But the author found herself attracting headlines of an entirely unwelcome kind when it was revealed that she had borrowed liberally from other writers, including a blogger who goes by the name Airen. The initial enthusiasm for the book quickly melted away, and some critics may have wondered how they had allowed themselves to get caught up in the hysteria over what turned out to be a minor literary event. More challenging fare was provided by Melinda Nadj Abonji.

Mindfulness and Writing You are probably familiar with an image that has forged its way through social media. It outlines the creative process as follows: This is awesomeThis is trickyThis is shitI am shitThis might be okThis is awesome I am going to walk you through each stage of the process with useful techniques for overcoming blocks.