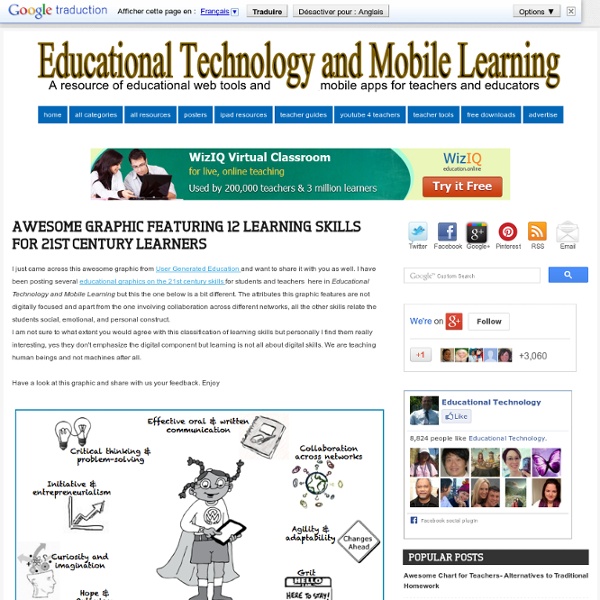 21st Century Digital Skills Graphic for Teachers As a 21st century teacher, have you ever took the time to ponder on the skills you need to work on to improve your teaching ? what about technology, is it included in those skills ? Posing such questions and trying to find answers to them is one major component of a successful teaching experience. It is a healthy process indicative of a sound professional growth and the more we ask questions the better our teaching practice becomes. Because the world is going digital, technology has become a major player in the learning-teaching equation. The 27 Characteristics of A 21st Century Teacher "21st Century Educator" is probably the most popular buzzword in today's education. There is a growing and heated debate whether or not to label educators as 21st century and each camp has its own concept and arguments, however, for me personally I see teaching in 21st century as having undergone a paradigmatic shift. This is basically due to the emerging of the " social web" and the huge embrace of technology and particularly the mobile gadgetry in our classrooms. It would be unfair to ignore these huge transformations and their impact on education. Having said that, we are sharing with you today this great infographic from Mia featuring the 27 ways to be 21st century teacher. courtesy of :

Awesome Interactive Graphic Featuring 21st Century Thinking Skills Here is a wonderful interactive image created on Thinglink by J Beam featuring some important tools that support the 21st century thinking. As you can see from the graphic below, there are four main skills associated with the 21st century thinking these are : creating, collaborating, communicating, and critical thinking. These are broad umbrella terms that include several other categories . Apart from this clasification of the thinking skills and wether or not you agree with them being labelled as 21st century skills the web tools that are associated with each one of them are really worth trying out. Most of these tools are curated by the popular wiki : wikispacesforshools. I invite you to check them out and share with us what you think of them. Hover your mouse over each skill to access the tools associated with it.