22 Dreamy Art Installations You Want To Live In 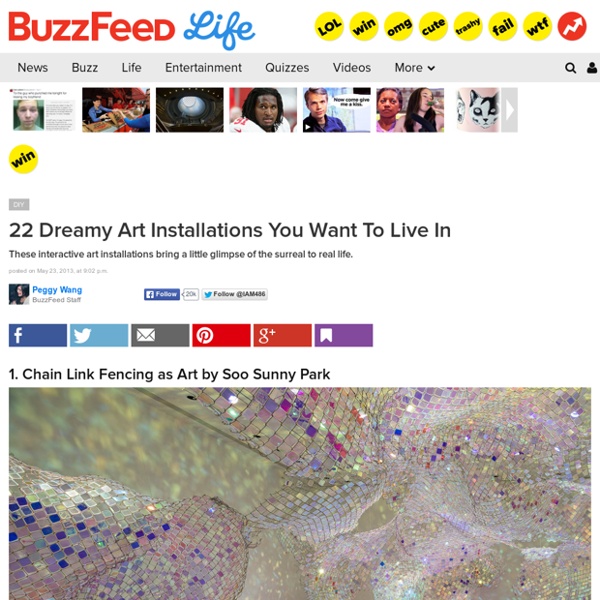 27 Ways To Make Your Groceries Last As Long As Possible TOP 10 large scale installations of 2013 TOP 10 large scale installations from towering tyrannosaurus-rex sculptures, massive inflatable balloons and interventions popping up in urban sites, 2013 saw a number of large scale installations completed around the globe. all of the work is of monumental scale, engaging audiences and onlookers in a memorable experience. take a look at designboom’s TOP 10 selections for this past year’s most unforgettable, enormous art. philippe pasqua: full-scale t-rex in paris image © anthony gelot soaring over the seine river in paris is a life-size tyrannosaurus-rex sculpture, conceived and constructed by french artist philippe pasqua. the t-rex, a fixture in popular culture, is characterized by its massive skull, long powerful tail, and treacherous teeth, all which are exemplified in pasqua’s skeletal construction. the monumental silver structure surprises passers-by, synthesizing the relationship between artistry and shock value. a massive submarine emerges in milan’s city center

How To Make Crispy, Delicious Tortilla Chips At Home Top 10 Most Stunning Art Installations in 2013 Out of all the different types of art forms we write about on a daily basis, there's one that clearly stands apart from the rest - installation. According to Merriam-Webster, an installation is defined as "a work of art that usually consists of multiple components often in mixed media and that is exhibited in a usually large space in an arrangement specified by the artist." Why do we love installation art? For many reasons. First, it's oftentimes immersive, providing visitors with a multi-sensory experience. Next, it's site-specific, meaning that piece of art was built for that particular time and space. Today, we take a look at the most stunning installations that were shown around the world in 2013. 10. In July, the city of Agueda, Portugal came alive as a colorful canopies of umbrellas hung over its streets. 9. 8. British artists Andy Moss and Jamie Wardley, of Sand In Your Eye, produced this incredibly powerful visual display at the D-Day landing beach of Arromanche in France. 7.

Crunchy Oatmeal Peanut Butter Oats 'n Honey Bars Yup! Just like Nature Valley’s, but better! Now I know I posted these copycat Nature Valley Oat’s ‘n Honey Bars a few months ago, but those were just the original. I mean we love the original over here, but we equally love the peanut butter. Really though, did you think we wouldn’t? And I mean it is pretty obvious we love us some peanut butter over here. Wasn’t it just last week that I posted this heavenly, insanely delicious, perfect warm weather treat? Oh fudge, this is getting embarrassing. So I think I need to lay off the peanut butter for a while….. Unless of course I come up with yet another delicious way to use it. Really, sometimes after I take pictures and I feel like the picture turned out just the way I wanted them to, I get SO excited to share the recipe with you guys. Seriously, could I get any weirder? I actually made these because Asher wanted some more bars to have as snacks. That girl knows exactly how to work me. These are really simple. No, really they are. Ingredients

An Interactive Cloud Made of 6,000 Light Bulbs CLOUD is a large scale interactive installation by artist Caitlind r.c. Brown that appeared September 15th as part of Nuit Blanche Calgary in Alberta, Canada. The piece is made from 1,000 working lightbulbs on pullchains and an additional 5,000 made from donated burnt out lights donated by the public. Update: Now with video. Croutons Recipe | How To Make Croutons | Croutons Recipes When I was in middle school I used to to work at my uncle’s deli during summers. Some of my job duties included making sandwiches, baking cookies, prepping salads, and making seasoned croutons using leftover sandwich bread from the day before. The nice thing about making croutons at home is the ability to make fresh croutons for salads and soups in small batches. However, I like making croutons because it helps me not to waste stale bread which otherwise may be tossed out and thrown away. Besides, how many times have you bought a box of croutons to make for a salad, only to let the rest of the box go stale (bye bye $3)? By making your own, you can make small batches which is great for being frugal and saving money. PS: Kids and grown-ups love snacking on them. Homemade Croutons Recipe Author: Savory Sweet Life Recipe type: Bread Prep time: Cook time: Total time: Serves: 3 cups Make homemade croutons at home with this easy recipe. Ingredients Instructions Preheat over to 300 degrees. Notes

Crock Pot Refried Beans You guys today I’ve got the most amazing from scratch, (non) refried bean recipe to share with you . Try to look past how they look and focus on the fact that with 9 pretty common ingredients and 8 hours in the crock pot… you can make your very own refried beans. Are you sold? Did I mention you do it all in a crock pot {and a pan but shhhuuuushhhh} and that they are WAY better than restaurant refried beans? CONFESSION: I’m a pretty picky person when it comes to refried beans. Oh and if you haven’t noticed, I’m on a little Cinco de Mayo kick as of lately. We stopped buying the canned refried beans a loooong time ago. Dice up an onion. Then chop up a good sized green bell pepper… …And 1 whole jalapeno. Lastly, smash, peel and mince up 5 cloves of garlic. HELLLOOOO lard. Melt two tablespoons of lard into a 10 inch skillet on medium heat. Throw in the peppers, onions and jalapeno. Season with just a smidgen of salt. Once the coast was clear, I added the beans to my crock pot. Boom. Prep Time: 15

Homemade Baked Smoked Paprika Potato Chips with Triple Onion Dip Football season is upon us, and not a moment too soon. With an NHL lockout looming and the Red Sox in shambles, I couldn't be more excited to get things going this fall! Last year I joined a fantasy football league with some fellow food bloggers (Tracy from Sugarcrafter , Dara from Cookin’ Canuck , Michelle from Brown Eyed Baker , Elle from Elle’s New England Kitchen , Jen from My Kitchen Addiction , and Marie from Meandering Eats ), which wound up being ridiculously fun even though I had no clue what I was doing until about week 8 :) I'm thrilled that we're back at it for a second year, we just finished our draft last night so we're good to go! Having a fantasy team really keeps me invested in all the games, not just the Patriots. Snacks aren't optional when it comes to football games, they're very much a necessity in my book. Last year I became shamelessly obsessed with french onion dip and not the fancy from scratch kind. The chips were an even bigger surprise for me.

Make Your Own Peanut Butter Can we talk peanut butter for a second? I was totally one of those picky-eater kids growing up, I had a major peanut butter and jelly phase. And even though my palette has (I hope) matured since then-I think I was on to something. Because peanut butter is AWESOME! To make peanut butter at home all you need is: 16 ounces of dry roasted peanuts (more or less depending on how much you want to make at once) a pinch or two of salt and a food processor. Place all the peanuts in your food processor and blend for 8-10 minutes. Another delicious nutty-spread I adore is Nutella! Needed: 1 1/2 cups raw hazelnuts, 1/2 cup sugar, 5-6 tablespoons cocoa (I used dutch-processed), 1/4 cup pure maple syrup, 1/4 cup oil (I used vegetable) and 2 tablespoons coconut milk. In your food process blend up the hazel nuts until they begin to get creamy (5-7 minutes) then add the other ingredients and blend for another minute or two until well combined. Happy snacking!

ethereally smooth hummus For as long as I have written this website — yes, even longer than it has been since I told you the wee white lie that Paula Wolfert’s hummus was all I’d ever need — I have known how to make the most ethereally smooth, fluffy, dollop-ing of a hummus and never told you. I have some nerve. But, in my defense, I had my reasons, mostly that I knew if I told you how to make it, I’d be able to hear your eye rolls through the screen, they’d be at once so dramatic and in unison. From there, there would be the loud, synchronized clicks of “Unfollow!” “Unfriend!” “Hide these updates, please!” Chickpeas, when they’re cooked, have a thin skin that sags a bit, kind of like a Sharpei’s, but less cute. … with a timer. What this nine minutes buys you, however, is a world of difference, hummus that is as far from the grainy, beige beleaguered paste a lot of recipes have led me to as it can be — all pillows and plumes of the softest chickpea-tahini-lemon-garlic puree. Makes 1 3/4 cups hummus