Posters from the WPA 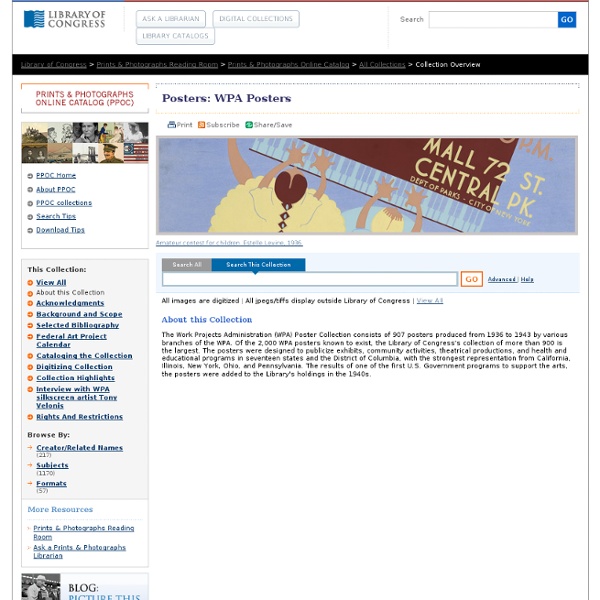 Offensive & Politically Incorrect Advertising & Propaganda Racism This marmelade ad from 1910 shows amongst others, a golliwog. I've never seen one in my lifetime, but, to my surprise, they are apparently still for sale in some countries. A classic take on the classic stereotype of the black servant (or slave?) No fuss, to the point racist packaging. With the combination of the Uncle Sam figure and the proclamation in his hand, its reasonable to suspect that this 1882 advert is a kind of weird play on the Chinese Exclusion Act which was passed as US law that same year. More than a century later, in 2007, we find these somewhat less explicit posters in Switzerland, promoting the right wing Swiss People's Party (SVP) and various supported initiatives. Naturally, the birds trying to get a bite out of Switzerland aren't white doves or owls, they're crows, black as the night, with obvious symbolism. Cigarettes I think anyone who's ever inhaled a puff of cigarette smoke could see the irony in recommending smoking as a treatment for a sore throat.

Curious Artist Wordle - Beautiful Word Clouds North Korean Propaganda Posters, Art & Collectibles DPRK | DPRKcool - North Korean (DPRK) Propaganda Posters, Artwork & Memorabilia Hand-Painted from North Korea Buy from our collection of genuine one-of-a-kind North Korean hand-painted propaganda posters, paintings and other artwork. This unique and rare DPRK artwork and political memorabilia make for great gifts--for you or for the person who has everything. Own a piece of history: some posters feature modern propaganda, while others feature themes from the Korean War or the Japanese occupation of the Korean peninsula. We also carry a large selection of movie and cinema posters and original oil artwork from known North Korean artists. Our buyers include art collectors, historians, professors and world travelers who are interested in owning cultural, political and propaganda war posters, propaganda cartoons and communist memorabilia. Please note that deliveries may be delayed leading up to and during the Lunar New Year celebrations this month. We expect to be listing some more inexpensive items and memorabilia in the spring. What Is Totalitarian Art?

VASAVA 40+ Useful Online Generators For Web Designers Oct 11 2010 Generators can be a great way to save time in your web design projects. High-quality generators can create graphics or code or even layouts in a matter of seconds or minutes, things that might take an hour or more if done by hand. Color Schemes A good color scheme is the cornerstone of a good website design. Color Scheme Designer 3Color Scheme Designer 3 has a really fantastic user interface that’s both attractive and easy to use. ColorSchemer Online V2ColorSchemer lets you create color palettes around RGB or HEX values, or using a color selector tool. KulerAdobe’s Kuler is one of the best color scheme tools available, with multiple options for both creating and finding color schemes. ColourLoversColourLovers offers more than just color and pattern generators; it’s an entire community based around a love of color and good design. Color Palette GeneratorThis generator creates a color palette based on an image. Layouts There are CSS generators for almost everything. CSS3 Please!

The Evolution of Propaganda Design: US Retro Posters The emergence of a new kind of aesthetic in Russian and Soviet art after the revolution of 1917 largely resulted from the state having experienced a revolution, the arts became revolutionary too and changed dramatically. In the United States, no such revolution occurred, which is quite evident in US World War I propaganda, which usually employs a visual language similar to earlier works. By the time of the Great Depression of the 1930s things really started to change, and American posters took on a new direction. I include some posters here that weren't state sponsored, and thus might not be propaganda in a strict sense, but I consider them all noteworthy and interesting, so I hope you can forgive me for this. While American propaganda of this period carried on older traditions in graphic design, and was not as groundbreaking as Soviet propaganda of the same period, it is nevertheless fascinating. World War I 1 & 2. 3. 4. 5. 6. 7. New Deal 8 & 9. 10 & 11. 12, 13, 14 & 15. 16. 17. 18.

ALAKAZAM! Alee & Press The Chairman Smiles - Introduction The former Soviet Union, Cuba, and China: three countries where posters played an important political role and received a large amount of artistic attention. This is a selection of 145 political posters, famous masterpieces as well as equally beautiful but unknown examples drawn from the collection of the International Institute of Social History in Amsterdam. 'The Chairman Smiles' gives an image of stormy political developments. The Chinese posters include not only a number from the period of the Cultural Revolution (1966-1976), with the glorification of Mao Zedong, idyllic scenes in agricultural communes and sharp attacks on political opponents, but also extremely rare posters from circa 1949 to the early 1960s, with the establishment of the People's Republic and the campaign for the Great Leap Forward . Of course, the image these posters give is not impartial. Go to: Soviet posters Cuban posters Chinese posters Additional information: