"'We Have Always Fought': Challenging the 'Women, Cattle and Slaves' Narrative" by Kameron Hurley - A Dribble of Ink 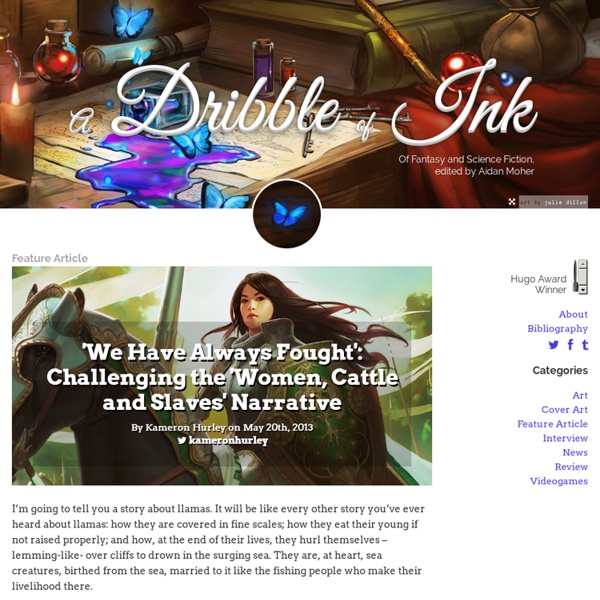 I’m going to tell you a story about llamas. It will be like every other story you’ve ever heard about llamas: how they are covered in fine scales; how they eat their young if not raised properly; and how, at the end of their lives, they hurl themselves – lemming-like- over cliffs to drown in the surging sea. They are, at heart, sea creatures, birthed from the sea, married to it like the fishing people who make their livelihood there. Every story you hear about llamas is the same. You see it in books: the poor doomed baby llama getting chomped up by its intemperate parent. On television: the massive tide of scaly llamas falling in a great, majestic herd into the sea below. Because you’ve seen this story so many times, because you already know the nature and history of llamas, it sometimes shocks you, of course, to see a llama outside of these media spaces. So you forget the llamas that don’t fit the narrative you saw in films, books, television – the ones you heard about in the stories.

Differences between Hellenistic and Hellenic Greek Civilization Hellenic studies focuses on the study of the Ancient Greeks. It also studies the impact of Hellenic civilization on other time periods, such as the Medieval period, the Renaissance, and modern times. This study, however, is limited in scope to Ancient Greek civilization between 510 BCE and 323 BCE, a period known as "Classical Greece."

Worldbuilding with Maps Concept artist Lorin Wood has launched a new group blog called "Nuthin' but Worlds," about concept art and worldbuilding, an offshoot of his successful "Nuthin' but Mech" blog and books. I'm a contributor, and here is what I contributed for my first post: For me, making a map is the best stimulant for building worlds and telling stories. But there are many kinds of maps. The Story of Feminist Punk in 33 Songs By Vivien Goldman It’s punk, not spunk. So loaded towards males is the English language, though, that we may have to reinvent our whole vocabulary. Because some of the best words to describe our female punks are phallocentric: “spunky,” “ballsy.”

Hellenic vs Hellenistic civilization There were essential differences between the Hellenic (Classical) and the Hellenistic ages. How did these differences affect the every-day lives of the people? How were the diferences reflected in the art, literature, and philosophy of the two periods? The shift from Hellenic to Hellenistic represents the shift from a culture dominated by ethnic Greeks, however scattered geographically, to a culture dominated by Greek-speakers of whatever ethnicity, and from the political dominance of the city-state to that of larger monarchies. Hellenic (Greek) refers to the people who lived in classical Greece before Alexander the Great's death.

Why Strong Female Characters Are Bad for Women Welcome to Overthinking It, the site that subjects the popular culture to a level of scrutiny it probably doesn't deserve. There's much more where this came from, so if you like this article: Opening Arguments If We Wrote Men Like We Write Women, Part II Uncategorized Wow. A lot of great comments and other responses to yesterday’s blog post that genderswapped scenes from Heinlein, Asimov, and Anthony. Some preliminary thoughts: The Greek Dark Ages and Alexander the Great Minoan-4 Greece The Greek Dark Ages

HULK EXPLAINS WHY WE SHOULD STOP IT WITH THE HERO JOURNEY SHIT SERIOUSLY, HERE IS EXACTLY HOW BIOWARE WRITER RESPONDED [VIA MESSAGE BOARD AT THAT]: “So I’m supposed to believe someone is smart enough to do a big Excel spreadsheet with color coding and stuff but not smart enough to know about Campbellian archetypes? Yeah, guys, every BioWare game has the same plot! See, things are kind of normal, and then things change and you have to go out and do stuff, and you go to crazy weird places! Aaaaaand so yeah, totally the same story. That’s asinine.” Weekes said the “intro, four planets, finale” structure familiar to BioWare games is picked for a number of good reasons.

If We Wrote Men Like We Write Women Uncategorized Posting these without comment…for now. Curious what people’s thoughts and reactions will be. -Jim While Mr.