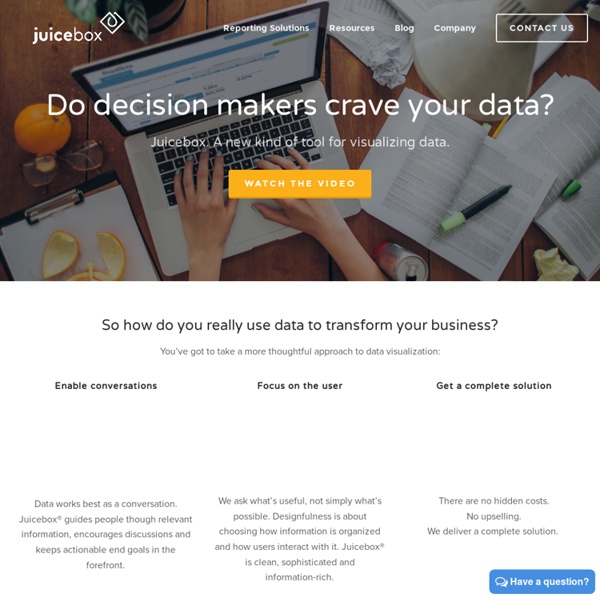 Introducing Ogma, the Javascript library for large-scale graph visualization and interaction - Linkurious - Understand the connections in your data. Linkurious announces the release of Ogma, the Javascript library for large-scale graph visualization and interaction. State of the art visualization libraries for the Web are unable to display graphs with more than 10 000 nodes and edges. With Ogma is it now possible to display more than 100 000 nodes and 100 000 edges. Ogma is compatible with more than 80 browsers and any devices. Companies can now start integrating a reliable and scalable graph visualization component into their applications. Technology mkweb // Martin Krzywinski / Genome Sciences Center Schemaball is a flexible schema visualizer for SQL databases. The purpose of Schemaball is to help visualize the relationships between tables. Tables are related by foreign keys, which are fields which store the value of a record field from another table. Foreign keys create a lookup relationship between two tables. Large schemas can have hundreds of tables and table relationships.

Free Data Visualization: 25 Best Tools Date visualization can be a pain if one is not aware of the many tools one can use in its endeavor. Data visualization is a process wherein data is shown in a simpler way in order for people to understand easily. Samples of data visualization tools include maps, graphs, pictures, and many more. Data Wrangler UPDATE: The Stanford/Berkeley Wrangler research project is complete, and the software is no longer actively supported. Instead, we have started a commercial venture, Trifacta. For the most recent version of the tool, see the free Trifacta Wrangler. Why wrangle? Too much time is spent manipulating data just to get analysis and visualization tools to read it. Wrangler is designed to accelerate this process: spend less time fighting with your data and more time learning from it.

Screensaver - visualizing the global blogosphere Twingly Screensaver Beta Twingly screensaver is visualizing the global blog activity in real time. Forget RSS readers where you see only what you're interested in. How to use gestalt laws to make better charts The Excel Charts Blog Every chart starts with a table. We transcribe this table into a visual representation of distances between data points: the “origin chart”. That’s when our “eye-brain system” starts making assumptions. iVisDesigner iVisDesigner stands for Information Visualization Designer, which is a platform in which users can interactively create customized information visualization designs for a wide range of data structure. iVisDesigner was started around March 2013 as the undergraduate thesis project of Donghao Ren, its overall goal comes partially from the previous Visualization Assembly Line project, which allows users to freely create axis-based visualizations for multidimensional datasets, like scatterplots and parallel coordinates. In iVisDesigner, we employed a new approach. By allowing users to interactively create mappings from data elements to graphical elements, we support interactive creation of information visualization designs. iVisDesigner is much more expressive, allowing a wide range of visualization designs for different data structures be accomplished without any programming.

Gephi, open source graph visualization software - Part 4 Community ~ gexf gexf4j Francesco Ficarola is a Computer Engineer and a Ph.D. student at the Sapienza University of Rome. In addition he is been working for an Italian company as R&D Engineer for one year. His main research interests are Wireless Sensor Networks, Social Networking and whatever concerns “Internet of Things”. Gephi supports the 1.2draft of GEXF file format since version 0.8.

18 LinkedIn Apps, Tools, and Resources I tweeted the other day about LinkedIn’s Resume Builder and I got a number of surprising responses from people I would have assumed would already know that LinkedIn had a resume builder. LinkedIn has been cranking out new features and tools, and I realize that it’s too easy for me to assume that everyone else knows what I know, so I’m compiling all of the interesting offerings LinkedIn has released in 1 place for easy consumption. While you may be familiar with some of them, I can almost guarantee you aren’t familiar with ALL of them. I’ll start with LinkedIn Labs offerings and then cover Outlook, Jobs Insider, Internet Explorer, Firefox and Google toolbars, LinkedIn mobile solutions, the Lotus Notes widget, sharing bookmarklets, emails signatures, the Mac search widget, and LinkedIn Ads. Resume Builder