A Collection of Social Network Stats for 2009 « Web Strategy by 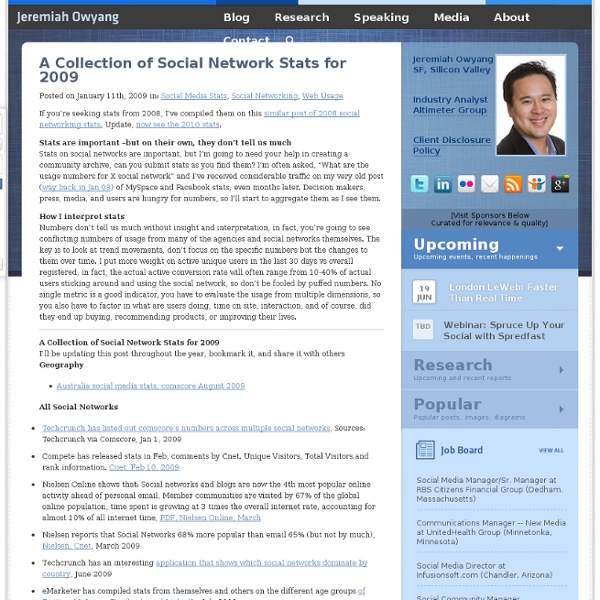 If you’re seeking stats from 2008, I’ve compiled them on this similar post of 2008 social networking stats. Update, now see the 2010 stats. Stats are important –but on their own, they don’t tell us much Stats on social networks are important, but I’m going to need your help in creating a community archive, can you submit stats as you find them? I’m often asked, “What are the usage numbers for X social network” and I’ve received considerable traffic on my very old post (way back in Jan 08) of MySpace and Facebook stats, even months later. Decision makers, press, media, and users are hungry for numbers, so I’ll start to aggregate them as I see them. How I interpret stats Numbers don’t tell us much without insight and interpretation, in fact, you’re going to see conflicting numbers of usage from many of the agencies and social networks themselves. A Collection of Social Network Stats for 2009 I’ll be updating this post throughout the year, bookmark it, and share it with others Geography Hi5

Press & Events DatagemApr. 11, 2014 | Share Camera Content Drives Surge Among Mobile-First Social Networks in the U.S. Outside of the larger, established networks, some of the more talked about emerging networks have been Instagram, Snapchat and Vine. Not surprisingly, their highly visual and easily digestible content is immediately resonating with users and attracting new adherents. Manage your Message: Top 40 ways to get noticed online (apart fr This is a great compilation of resources for increasing the profile of a person or organization online. I found this at the Taylor Herring PR blog . If your company is looking to raise awareness and grow its online audience, you'll find at least a few ideas to help you tell your stories.

Social Networking: Everyone is Doing it, All the Time comScore has a report on the state of social networking in the UK, showing that social networking is a mainstream activity among all age groups, and the second online activity when it comes to time spent, behind instant messaging. Simply put: everyone is doing it, and they're doing it often. According to the study, 80% of users among all age groups visited a social networking site in May 2009, at least once, spending an average time of 4.6 hours there. NpTech Summary: Best (free) Sources To Get Social Media Audience Flickr Photo by Lynetter Figuring out where your target audience is spending their time on the social web and what they are doing is an important prelude to crafting a social media strategy. This is a different activity than "listening." Thankfully, there is lots of research available about people who are using particular social media sites or tools. While there is no substitute for a commissioned market research study of you existing audiences' social media usage, you can certainly glean a lot of useful tidbits from secondary research reports. And, did I mention they are free?

Internet - Wikipedia, the free encyclopedia - Flock U.S. Army soldiers "surfing the Internet" at Forward Operating Base Yusifiyah, Iraq The Internet is a global system of interconnected computer networks that use the standard Internet protocol suite (TCP/IP) to link several billion devices worldwide. It is a network of networks[1] that consists of millions of private, public, academic, business, and government networks of local to global scope, linked by a broad array of electronic, wireless, and optical networking technologies.

The 7 Ways to Approach Twitter Lon S. Cohen is a writer and Director of Communications at @ALSofGNY. He is @obilon on Twitter. There are plenty of strategies for approaching Twitter. It’s getting more complex each day, but in the end it can be boiled down to a few simple approaches. From Twittering on behalf of yourself to Twittering for a company, playing the part of a classic character to being a robot, here are seven ways users approach Twitter.

List of Communities, Virtual Worlds, and Social Networks for You I’m doing research around how different ages using social networks, communities, and virtual worlds by age, and will compile this list as it grows. I’m looking for established community sites that are mature enough to work with brands. There is already so much coverage on mainstream social networks like Bebo, MySpace, Facebook, and LinkedIn that we forget about the other smaller niche networks. First, understand technographics (how ages use social media 18+) by accessing Forrester’s profile tool, available for free. If you know the demographics for any of these, please leave a comment.

Focused Social Networks Build Community As MySpace and Facebook develop their sites for mass appeal, some social networks are banking on a focused approach. For example, Children with Diabetes is a Johnson & Johnson-owned ad-supported social network for families who have children with diabetes. Nearly one-half of the site’s traffic comes from search, according to Joseph Natale, vice president at Children with Diabetes. “We have 32,000 pages of content optimized with words like ‘children,’ ‘diabetes’ and ‘juvenile diabetes,’” Mr. Natale told eMarketer in an interview. “Our organic search is strong. Social Media, Web 2.0 And Internet Stats - Flock As our digital and physical lives blur further, the internet has become the information hub where people spend a majority of their time learning, playing and communicating with others globally. Digital marketing professionals understand this, but most outside the industry don’t realize just how staggering the numbers are of people collaborating, researching, and interacting on the web. I thought it might be fun to take a step back and look at some interesting/amazing social media, Web 2.0, crowdsourcing and internet statistics. I tried to find stats that are the most up-to-date as possible at the time of publishing this post.

Blogs Can Ease Customer Communication Blogs have long had an avid following, but corporations are finding that blogs can be a secret sauce to building solid relationships with their customers. For one thing, blogs are popular with consumers. According to an August 2008 study by BuzzLogic and JupiterResearch, there has been 300% growth in monthly blog readership over the past four years. In fact, nearly one-half of the online population reported reading blogs.