The Community Roundtable: A Peer Network for Community Managers 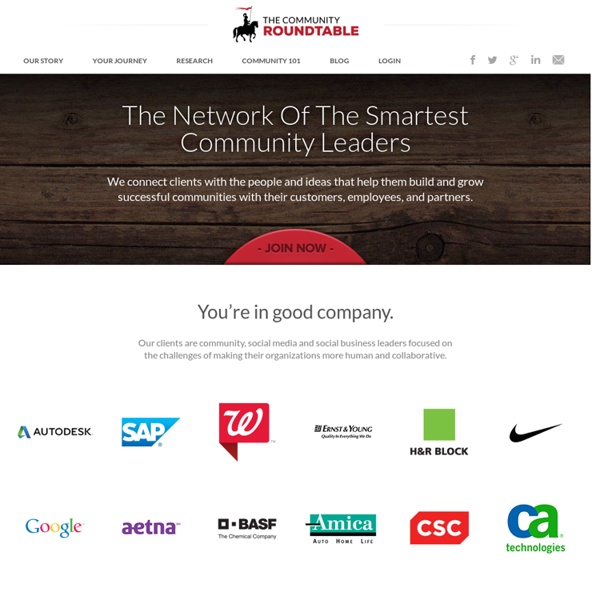 We live community management and social business each and every day. You gain from our focus – check out our latest ideas. Friday Roundup: Happy Anniversary to Us By Shannon DiGregorio Abram, Relationship Manager at The Community Roundtable. [caption id="attachment_13421" align="alignright" width="300"] 2/3 of TheCR Team at The Anniversary Happy Hour[/caption] This week we were lucky enough to celebrate our fifth anniversary! We gathered with good friends and members at the Summer Shack in …

Internet Marketing Blog 14 fantastic things we found on the internet this week This round-up covers a whole two weeks’ worth of brilliant entertainments, distractions and hijinks that we found on the internet. Yes the round-up took the extended Easter weekend off. It gorged itself on roasted meats, truffle chocolates and port before swearing at its family and waddling off back home to watch the entire first series of Hannibal in bed. The Benefits of Creating an Online Community - 7Summits Originally posted on the ForeFront Magazine blog. “A new class of company is emerging—one that uses collaborative technologies intensively to connect the internal efforts of employees and to extend the organization’s reach to customers, partners and suppliers…” This quote from a McKinsey study has always resonated with me as I consider the benefits and impact of social technologies and online communities on the way business is done. In today’s competitive marketplace, companies are working to maximize their opportunities and define the underlying strategy of embracing an online community to connect, engage and extend relationships with customers, employees and partners. From high-tech to higher education, online communities have a strong use case in most verticals, so long as the strategy is driven by the businesses’ objectives and audience needs and aligns with existing businesses processes and systems. What Are the Benefits of an Online Community?

Secret Lives of Tiny People There aren't too many photo sets more fun than this... Barcelona-based photographer Oscar Ciutat put these creative scenes together by placing miniature human figurines in precarious situations. The disproportionate scale between the tiny people and their surroundings is hilarious... AdWords Keywords are what people search for on Google. Your ad appears beside relevant search results. You create your ads You create ads and choose keywords, which are words or phrases related to your business. Get keyword ideas Your ads appear on Google

The Corporation for Public Broadcasting Names Joseph Tovares Senior Vice President for Diversity and Innovation For Immediate Release on April 26, 2010 Washington, DC -- The Corporation for Public Broadcasting (CPB) has named Joseph Tovares, senior vice president for Diversity and Innovation. “In his new capacity, Joseph will work to extend public media’s reach and service through innovation,” said Pat Harrison, president and CEO of CPB. “Joseph is a proven leader who has the vision to advance CPB’s commitment to greater diversity and inclusion in public media.” Tovares has been acting vice president for Diversity and Innovation since December and was responsible for overseeing the implementation of the NPS/Diversity and Innovation fund agreement for CPB. Getting Brand Communities Right In 1983, Harley-Davidson faced extinction. Twenty-five years later, the company boasted a top-50 global brand valued at $7.8 billion. Central to the company’s turnaround, and to its subsequent success, was Harley’s commitment to building a brand community: a group of ardent consumers organized around the lifestyle, activities, and ethos of the brand.

Business world not ready for millennials I’ve spent a lot of time on the road with clients lately. Among the topics we discussed, managing the changes associated with the current generational transition was the hottest. The conversations focused mainly on the differences in consumer behaviours between younger and older buyers, and in work and career orientation between millennials and those in senior management. I think the topic is not only fascinating from a human behaviour perspective, it’s also an important discussion for every management team in the country that’s looking outward at customers and inward at employees.

ClickZ The importance of headlines should never be overlooked, a little time spent finding the right headline can make a lot of difference. A good headline means more people will click on your article wherever they see it, it ensures that the effort you spent in writing an article doesn’t go to waste, and it can also help your content to be picked up by search engines in the weeks and months after publishing. Here are a few areas to think about when writing headlines. It should be noted though, that its not about writing sensation headlines for short-term traffic gains, it’s about ensuring that, if you write a quality article, the headline works to sell it. 1.

Social Media, Games, Email Dominate Web Time by MarketingCharts staff Web Users Dramatically Increase SocNet Time Social networks accounted for 22.7% of US internet time, or 906 million hours, in June 2010, a significant 43% increase from the 15.8% share of time they commanded in June 2009. Online games came in a distant second with a 10.2% share of internet time in June 2010, or 407 million hours, a 10% year-over-year increase from 9.3%. Email Loses Luster As social networking becomes an increasingly popular form of online communication, email is taking a hit.

A Big Payoff from Online Company Communities Title: Social Dollars: The Economic Impact of Customer Participation in a Firm-Sponsored Online Community Authors: Puneet Manchanda, Grant Packard, and Adithya Pattabhiramaiah (all University of Michigan) Publisher: Ross School of Business Working Paper Date Published: January 2012 Studies show that consumers are spending more of their leisure time online, and U.S. marketers are flocking to third-party social networks such as Facebook and Twitter to reach them. 7 Annoying Social Media Personality Disorders [A guest post from the talented Laura Click] There is one thing that will make or break someone’s ability to be successful in social media. No, it’s not smarts, strategy or writing skills (though, all of those things are immensely helpful). It’s personality.

What Firms are Doing Wrong When They &#039;Value&#039; Fans Social media firms such as Syncapse, Vitru and now Fanscape have come up with formulas to capture the dollar value of a fan or follower's worth. Most companies, though, don't use such complex formulas. Instead, they have been proceeding on blind faith that a social media presence will pay off on the bottom line. While they are not inclined to want a specific number, some sort of valuation path would be welcome. In part one, MarketingVox spoke with a few social media experts to find out what are the best ways to fill the gap between the complicated formulas of Syncapse et al and the fuzzy math used by the masses. Yobongo: Building the Next Location-Based Social Network: Tech News and Analysis « A new iPhone app called Yobongo is launching Thursday, with plans to make building connections between locally-based, like-minded users easier. The app provides a simple chat-based interface that groups users based on location and seeks to make it easier for people to get to know each other both in-app and in the real world. Yobongo works by selecting people based on where they’re located, and grouping them together in virtual rooms of 10 to 15 users. While the app’s algorithm uses location as a starting point for grouping users together, it never explicitly reveals where a participant is located, ensuring the privacy of its users.