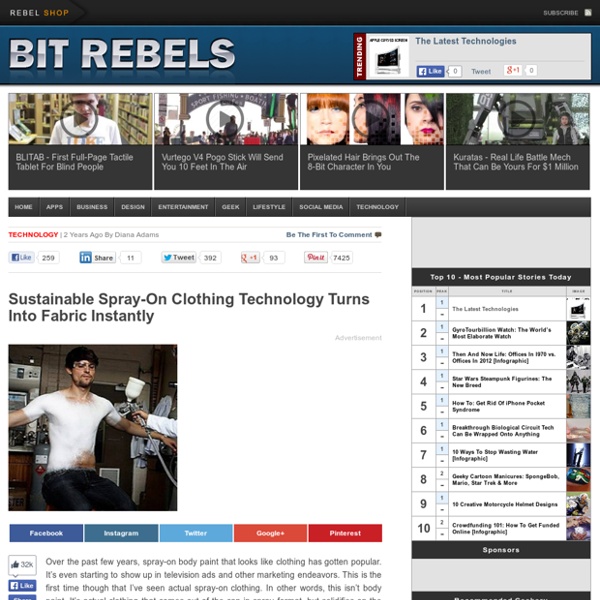 Advertisement Over the past few years, spray-on body paint that looks like clothing has gotten popular. It’s even starting to show up in television ads and other marketing endeavors. This is the first time though that I’ve seen actual spray-on clothing. This technology, called Fabrican, is based on 15 years of research by fashion designer Manel Torres and particle engineer Paul Luckham. When I think about using spray-on clothing in daily life, the roadblock that I hit in my mind is that we wouldn’t be able to spray our own clothing on our bodies. I wonder if in a few decades from now we’ll all either 3D print our clothes or make them in some other unusual way like this. Spray-On Clothing Technology Creates Non-Woven Fabric (Click Images To Enlarge) (Video Is Slightly NSFW) Via: [Design Rulz] [Designboom]

33 Insanely Clever Products That Came Out In 2014 Window Solar Charger - IPPINKA The Window Solar Charger can be used to power your smartphone through sunlight from the window. The charger is a rechargeable lithium battery that holds 1400mAh of electric charge. Because it can stick to any window, it can be used at home, in the car, or at the office. The energy is completely green, as it is all collected through solar panels on the window-facing side of the device. USB and Mini-USB ports provided: technoisy.com - pen printer 30 Touch Screen Table Designs - From Touchscreen Dining to Futuristic Classro... By: Laura McQuarrie - Published: Mar 7, 2014 These hi-tech touch screen table designs may be similar in their appearances, but they are incredibly versatile in their uses. The tables are optimized for classrooms, business meetings, drafting and dining, proving that they are well-rounded and suitable for both work and play. When it comes to restaurants, some establishments are really pushing to be the frontrunners when it comes to this kind of technology. Pizza Hut recently developed a concept for a table that would let its patrons completely customize the toppings on their pizzas, making the experience very visual, fun and interactive. Touch screen tables are a bit on the pricey side, but there are also a number of tables that are designed to hold iPads or tablets, which makes them much more affordable and realistic for use by the average homeowner.

Complete Camera Smartphone Concepts : iphone pro concept Smartphones are becoming widely recognized as great devices for a variety of uses, highly encompassing multimedia concepts and the iPhone Pro Concept by Jinyoung Choi aims to turn the iPhone into a DSLR-savvy smartphone. The design features a 4.5-inch wide screen and has two buttons on the edge of the phone. The camera on the phone is 1.2 megapixels and is built so that one can easily latch a DSLR lens to the phone for furthered quality photographs and video. Including features such as projection, speakers and even a removable disk for ease of storage the iPhone Pro Concept threatens all other smartphone devices to dare and step up their game. This phone if manufactured will turn the already growing handheld film industry into a storming production zone for individual filmmakers.

ZINK: Portable Zero Ink Printer ZINK is a portable zero ink printer capable of printing photos directly from your smartphone. The secret of this ink and toner lacking printer is in the paper. ZINK Zero Ink Paper is a patented paper created by the company which, when heated by the device, activates the yellow, magenta and cyan colour-forming crystals embedded within the paper itself. The printer is operated by the ZINK Design & Print Studio app which allows you to center your images, add captions, and apply unique filters to enhance your photos. Despite its small size, the ZINK produces photographs which are rich and vibrant in colour.

10 Futuristic Materials You Should Know About | FILACART BLOG | 3D Printing M... Materials science is really paving the way for bringing the things we see in sci-fi into a reality. Below we list 10 futuristic materials that you should know about because they could be set to change the world as we know it. 1. Aerogel Aerogel is what you get from supercritical drying of liquid gels of alumina, chromia, tin oxide, or carbon. It’s 99.8% space which makes it semi-transparent, but despite its incredibly low density it shows surprising strength, especially as an insulator. 2. Carbon nanotubes are long chains of carbon held together by the strongest bond in all chemistry, the sacred sp2 bond, even stronger than the sp3 bonds that hold together diamond. 3. “Metamaterial” refers to any material that gains its properties from structure rather than composition. 4. We’re starting to lay down thick layers of diamond in CVD machines, hinting towards a future of bulk diamond machinery. 5. Diamonds may be strong, but aggregated diamond nanorods (amorphous fullerene) are stronger. 6.

3D printed pills, dildos, guns and babies By this point, you’re already well aware of 3D printers and how they’re continuing to push technology to mindblowing places we didn’t expect to end up in. They’re even available for the general public. As of this week, the US just approved the first 3D printed pill. An anticonvulsant (treatment for seizures), Spritam previously had issues with dissolving, but thanks to 3D modification, more porous layers have been added to the pill. Organs are, as you know, vital. Whether there’s a need for a new leg, arm, you name it, the 3D printer has revolutionized the custom prosthetic as well. This is kind of terrifying. Jesus Christ. The 3D printing market will most likely become a common tool for food production in the future. A neat advantage for 3D printed food customers is that you can preselect the nutritional value should you want a certain dosage of vitamins, even minerals. Fuck, this is weird. Download the software and go ahead, print your sex toy at your own convenience.

The Instagram accounts changing the world No one can really dispute the power of social media. Whether it's raising awareness for once-ignored issues, or helping to bring down entire governments, sites like Facebook, Twitter and Instagram are now stronger than ever. Offering people the chance to take pressing political problems into their own hands, it's become a whole new way of addressing everyday social injustice. With their slogan emblazoned across the chests of basically everyone – from Cara Delevingne to Miley Cyrus – the notorious Free The Nipple movement has had no shortage of publicity recently. Born out of desperation and despondency, Amber Amour started the #StopRapeEducate campaign after she was sexually assaulted by her roommate last year. Poet Alyssa Seibert has swapped images for words with her Instagram account. “What attracted me to Instagram was its ability to share with a wider audience the stories I see everyday”, writes photojournalist Ruddy Roye.