May 20, 1990: Advice on Life from Calvin and Hobbes Creator Bill Watterson 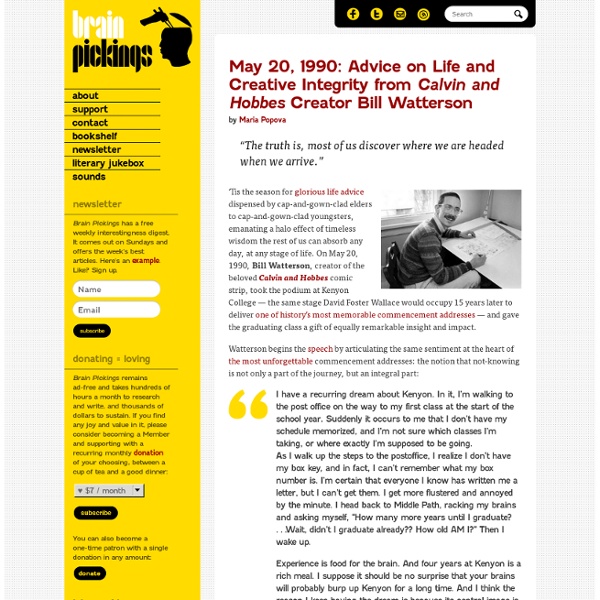 by Maria Popova “The truth is, most of us discover where we are headed when we arrive.” ‘Tis the season for glorious life advice dispensed by cap-and-gown-clad elders to cap-and-gown-clad youngsters, emanating a halo effect of timeless wisdom the rest of us can absorb any day, at any stage of life. On May 20, 1990, Bill Watterson, creator of the beloved Calvin and Hobbes comic strip, took the podium at Kenyon College — the same stage David Foster Wallace would occupy 15 years later to deliver one of history’s most memorable commencement addresses — and gave the graduating class a gift of equally remarkable insight and impact. Watterson begins the speech by articulating the same sentiment at the heart of the most unforgettable commencement addresses: the notion that not-knowing is not only a part of the journey, but an integral part: I have a recurring dream about Kenyon. It’s surprising how hard we’ll work when the work is done just for ourselves. He concludes by echoing Rilke: Related:  whydtinogo • rangerralph • fairypenguin

How to Transfer VHS Tapes to DVD or Other Digital Formats Edit Article Using an Analog-to-Digital AdapterUsing a VHS-DVD Combo PlayerUsing a Commercial Conversion Service Edited by Peter, Carolyn Barratt, Teresa, Minealways and 4 others If you've got a mountain of unlabeled youth soccer games and bar mitzvah compilations from 1989 threatening a VHS avalanche in your basement, it may be time to fast-forward into the 21st century. Ad Steps Method 1 of 3: Using an Analog-to-Digital Adapter 1Select a analog-to-digital adapter. Method 2 of 3: Using a VHS-DVD Combo Player 1Get a combo VHS-DVD player. Method 3 of 3: Using a Commercial Conversion Service 1Take your tapes to be converted by the electronics department of a local box store. Tips If the video begins to skip or freeze part way through a video capture, the CPU may be slowing down to prevent overheating.

The Ultimate Beer Infographic Just Got Even More Ultimate What happens when you’re a Brooklyn-based illustration studio that releases an absurdly, ridiculously, profusely detailed chart of beer? Unable to top this perfect intersection of high-minded design and sudsy, sudsy illustration, do you just pop a cold one and close up shop? Or do you put a fresh coat of wax on that handlebar mustache, grab another cronut, and get back to work? Pop Chart Lab did the latter, doubling down on their design that’s been in the works since 2010 to create this 60-by-40-inch malty monstrosity called The Magnificent Multitude of Beer. Yet at the same time, this ever-ballooning print is like an unintentional visualization of the last three years of the U.S. beer industry--we now have as many craft breweries as we had in the 1880s, with two more opening every day. As the company’s co-founder Patrick Mulligan puts it, “I think we can be happy at 60-by-40 for a while, but soon enough I'm sure we'll be looking for a printer that can print 100 inches wide.”

Aktuel 5 Rules For Crowdfunding Success From The Queen Of Multitasking Underwear (You Read That Right) Technology probably isn't the first thing most people think of when they think of underwear. Joanna Griffiths is not most people. While studying at INSEAD, one of the world's largest graduate business schools, Griffiths saw an opportunity to create a product that did more than the existing options on the market. "Thanks to technology, almost everything has evolved, everything but our underwear," she says. "We created a product truly designed with women's needs in mind: underwear that looks great, fits great, and has technology built in to eradicate odor and wick away and absorb moisture." Griffiths needed a way to fund her new venture, Knix Wear. The campaign was a success, surpassing the $40,000 goal (by an extra $20,000). 1. Before you start your crowdfunding campaign, Griffiths suggests that it's important to study others who have done it well. 2. No matter how much experience you have in the crowdfunding space, it requires a strategic approach to reach--and exceed--your goal. 3. 4.

What Is Love? Famous Definitions from 200 Years of Literary History by Maria Popova “Love has nothing to do with what you are expecting to get — only with what you are expecting to give — which is everything.” After those collections of notable definitions of art, science, and philosophy, what better way to start a new year than with a selection of poetic definitions of a peculiar phenomenon that is at once more amorphous than art, more single-minded than science, and more philosophical than philosophy itself? Kurt Vonnegut, who was in some ways an extremist about love but also had a healthy dose of irreverence about it, in The Sirens of Titan: A purpose of human life, no matter who is controlling it, is to love whoever is around to be loved. Anaïs Nin, whose wisdom on love knew no bounds, in A Literate Passion: Letters of Anaïs Nin & Henry Miller, 1932-1953: What is love but acceptance of the other, whatever he is. Stendhal in his fantastic 1822 treatise on love: C. There is no safe investment. Lemony Snicket in Horseradish: Bitter Truths You Can’t Avoid: E.

Adjusting V Brakes Troubleshooters.Com and Steve Litt's Guide to Transportational Bicycling Present Copyright (C) 2007 by Steve Litt CONTENTS: I'm Steve Litt. I created the Universal Troubleshooting Process (UTP). I currently ride my bike about 30 miles per week. I also take care of my three childrens' bikes, two of which have V brakes. This document briefly outlines the steps to adjusting V brakes, and getting it right the first time. About Flipping the Bike "Flipping the bike", sometimes also called "standing the bike up", happens when you activate the front brakes so hard that the bike stands up on the front wheel and you go over the handlebars. On the other hand, I try my best to make sure my front brakes can flip the bike, or at least come close. Then there's the fact that, in the real world, brakes aren't always perfectly adjusted. Similarly, a flip-capable front brake can quickly slow you down when your rims are wet -- a lesser brake might let you coast into disaster. Full Maintenance Top of Page

Online Printing Services | Digital Printing Companies | PrintRunner.com 5 Non-Toxic Ways To Whiten Your Teeth Until recently, I'd always believed that the only way to a sparkling smile was with toxic chemicals and laser beams. After some research and a bit of trial and error, I’ve uncovered the best, natural ways to achieve a brighter, whiter and healthier smile. Using these ingredients, tips and tools, your teeth will sparkle in no time. (I got results within a few days, but if you’re a coffee or red wine drinker, it may take a week or so to see a noticeable difference.) 1. This is a staple in any nontoxic aficionado’s cupboard. It’s a simple: for one week, I put my natural toothpaste on the brush and then dip the brush in baking soda. 2. This ancient Ayurvedic treatment is used for a variety of health reasons, and also benefits your oral health. Beyond the benefits of whiter teeth, oil pulling is also great for overall detoxing and body cleansing. 3. Despite their red color, these berries have a whitening effect on the teeth. 4. 5. Photo Credit: Shutterstock.com