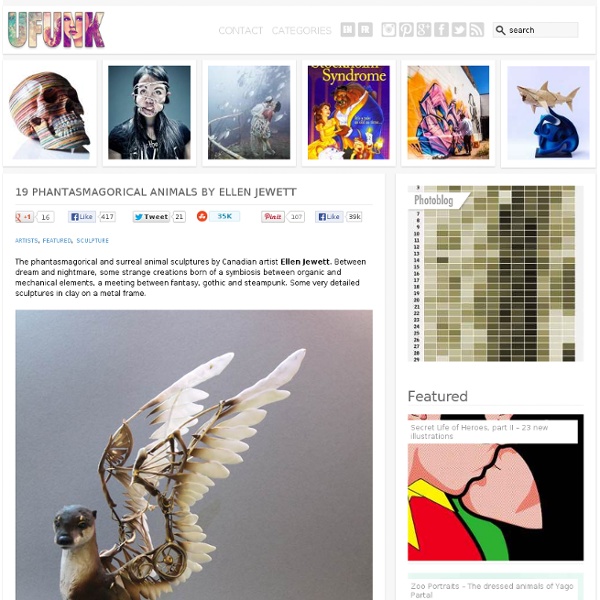 Amazing 3D Sidewalk Art They are amazing because they 1) look real 2) are completely flat but look 3 Dimensional 3) drawn only with chalk. The author of these great drawing is a super creative person also known as Pavement Picasso whose name is Julian Beever. Not to reinvent the wheel I will cite Wikipedia: “Julian Beever is an English chalk artist who has been creating trompe-l’œil chalk drawings on pavement surfaces since the mid-1990s. His works are created using a projection called anamorphosis, and create the illusion of three dimensions when viewed from the correct angle. Beever works as a freelance performance artist and creates murals for companies.”

Spectacular Moleskine Doodles Explode with Energy Philippines-based illustrator Kerby Rosanes proves that doodling can be so much more than scratching unintelligible scribbles on paper. Through his Sketchy Stories blog, Rosanes shares his wonderful world of doodling in a simple Moleskine sketchbook. Equipped with an ordinary Moleskine, a few Uni Pin drawing pens, and his innate gift for drawing, the artist is able to transport viewers to a world where tiny, cartoonish creatures explode with gusto to make up larger entities.

Ephemeral Portraits Cut from Layers of Wire Mesh by Seung Mo Park Using a process that could be the new definition of meticulous, Korean sculptor Seung Mo Park creates giant ephemeral portraits by cutting layer after layer of wire mesh. Each work begins with a photograph which is superimposed over layers of wire with a projector, then using a subtractive technique Park slowly snips away areas of mesh. Each piece is several inches thick as each plane that forms the final image is spaced a few finger widths apart, giving the portraits a certain depth and dimensionality that’s hard to convey in a photograph, but this video on YouTube shows it pretty well. Park just exhibited this month at Blank Space Gallery in New York as part of his latest series Maya (meaning “illusion” in Sanskrit). You can see much more at West Collects. (art news, west collects, lavinia tribiani)

Banksy Inside « The Drop Kings The mysterious Banksy just released some new paintings on his website. You heard it right, Banksy painted on a canvas. All Banksy fans will appreciate. Lessons Drawspace Pro Lessons are designed for artists of all levels and educators, and are logically organized into resources and activities. Eventually, all lessons and E-books authored by Brenda Hoddinott will be available here: four to eight brand new lessons and newly-revised older lessons are being added every month! Upgrade Now: Download all 242 lessons and 4 e-books! Try for Free: Download lessons marked as "Free"!