Don’t Go Back to School: How to Fuel the Internal Engine of Learning 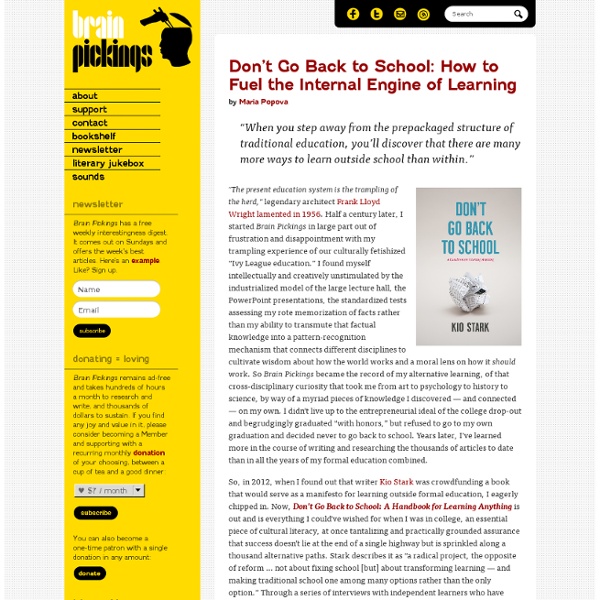 by Maria Popova “When you step away from the prepackaged structure of traditional education, you’ll discover that there are many more ways to learn outside school than within.” “The present education system is the trampling of the herd,” legendary architect Frank Lloyd Wright lamented in 1956. Half a century later, I started Brain Pickings in large part out of frustration and disappointment with my trampling experience of our culturally fetishized “Ivy League education.” I found myself intellectually and creatively unstimulated by the industrialized model of the large lecture hall, the PowerPoint presentations, the standardized tests assessing my rote memorization of facts rather than my ability to transmute that factual knowledge into a pattern-recognition mechanism that connects different disciplines to cultivate wisdom about how the world works and a moral lens on how it should work. People who forgo school build their own infrastructures. I learned how to teach myself.

Smoke and mirrors mask corruption at Pennsylvania’s largest cyber-charter school By Carmel DeAmicis On August 26, 2013 For the last decade, cyber charter schools have been springing up all over the country. Cyber schools give classes over the Internet to students in grades K-12, who get their education entirely online instead of in a brick-and-mortar location. Despite the lack of research into these schools’ educational quality, in recent years some states have removed limitations to their growth. Pennsylvania is one such state pioneering cyber charter schools. On Friday, the founder of Pennsylvania’s bigger charter school — PA Cyber — was charged with fraud, for funneling $8 million of the school’s funds into his personal companies and holdings. The indictment raises questions about whether regulatory bodies need to monitor cyber schools more closely. Youth cyber school programs are controversial in education. Critics have also pointed to the for-profit motive behind many cyber charter schools that distorts the educational purpose and leads to inflated costs.

David Foster Wallace's timeless graduation speech on the meaning of life, adapted in a short film" by Maria Popova “The real value of a real education … has almost nothing to do with knowledge and everything to do with simple awareness.” On May 21, 2005, David Foster Wallace got up before the graduating class of Kenyon college and delivered one of history’s most memorable commencement addresses. UPDATE: The David Foster Wallace Literary Trust exemplifies everything that’s wrong with copyright law. The most obvious, important realities are often the ones that are hardest to see and talk about. Hear the full speech in its sublime entirety, along with transcript and highlights, here, then wash it down with Wallace on ambition and why writers write. Thanks, Matt Donating = Loving Bringing you (ad-free) Brain Pickings takes hundreds of hours each month. You can also become a one-time patron with a single donation in any amount: Brain Pickings has a free weekly newsletter. Share on Tumblr

What You Need to Know About MOOCs - Technology We'll be updating this page regularly.Please check back for updates. Call it the year of the mega-class. Colleges and professors have rushed to try a new form of online teaching known as MOOCs—short for "massive open online courses." The courses raise questions about the future of teaching, the value of a degree, and the effect technology will have on how colleges operate. If you'd like to learn more about MOOCs in a condensed format, try reading "Beyond the MOOC Hype: A Guide to Higher Education's High-Tech Disruption," a new e-book by The Chronicle's technology editor. What are MOOCs? MOOCs are classes that are taught online to large numbers of students, with minimal involvement by professors. Why all the hype? Advocates of MOOCs have big ambitions, and that makes some college leaders nervous. These are like OpenCourseWare projects, right? Sort of. So if you take tests, do you get credit? So far there aren't any colleges that offer credit for their MOOCs. Who are the major players? edX Udemy

To Advance Education, We Must First Reimagine Society Why haven’t education reform efforts amounted to much? Because they start with the wrong problem, says John Abbott, director of the 21st Century Learning Initiative. Because disaffection with the education system reflects a much deeper societal malaise, it’s imperative that we first figure out what kind of world we really want: a world populated by responsible adults who thrive on interdependence and community, or a world of “customers” who feel dependent on products, services, and authority figures, and don’t take full responsibility for their actions? The answer, he says, will point to the changes needed in all three pillars of education — schools, families, and communities. As Abbott sees it, the need for reflection has never been greater. Spurred by technological advances, “civilization is on the cusp of a metamorphosis,” he says, that will lead either to societal collapse and chaos, or to a resurgence of liberty, community, and ethics. Re-Imagining Society First, Education Second

Applying Cognitive Psychology to Enhance Educational Practice Edssential article from Robert Bjork : The primary goal of this research, which is funded by the James S. McDonnell foundation, is to promote learning and memory performance within educational contexts through the investigation of principles in cognitive psychology. Studies address issues of transfer-appropriate and material-appropriate processing between encoding and retrieval. Applying tests in order to enhance learning and determining the desirable amount and timing of feedback regarding an individual’s memory performance are methods that are currently under investigation. The overlying theme of “desirable difficulties,” first introduced by Robert Bjork (1994), is also explored through manipulations in the spacing of learning events and the study schedule produced by interleaving various to-be-learned items, such as English-Swahili translated word pairs or prose materials. Read More About the Author Social Share

Hackschooling Jason, what's with the John Lennon quote? It's a great quote, but unless someone has explicitly told you otherwise, it has nothing to do with Logan any more than it has to do with your story above; which might be fine less the need to somehow single out your obsession with John Lennon (who's great but your making big reaches; not a good sign). It's not really necessary to try and make a great link in the specific way you have, between a good historical quote and some necessity by Logan to somehow tell the audience; "Hey, everything I've done is from John Lennon." It's not of course; maybe Logan hasn't listened to a Beatles song in his entire life. Maybe he has, but don't presume what you don't know and don't reach too far. If you read-up, Logan re-wrote his entire talk he had worked on for some 60 days, just prior to this TEDx event because he wasn't quite happy with it and asked others for advice. Finally, I have to address this privilege thing you refer to.

A story of education before technology | Pearson Blog I don’t feel I was at school too long ago. I finished in 1997, after sixth-form. But this week I was reminded that people born in 1997 are now legally adults. Then after wondering how I had changed, I began to ponder how education in my lifetime has changed; which is largely the pondering of the impact of technology. While at school (in the UK) I did have access to a computer suite – a room full of BBC computers where we were able to attempt some word processing and basic programming. Off to university in 1997, and surely this would be the step change. But what was this I heard – final dissertations had to be submitted ‘online’. I hope it’s not from a naivety of relative affluence that I presume most new college goers won’t start their studies struggling, like I did, to buy a computer. That today’s students take their technology for granted is a very, very good thing indeed for education.

How Engaged Are Students and Teachers in American Schools? By Anya Kamenetz, Hechinger Report Gallup recently released a major report on the State of American Schools. Their data paints a picture of schools performing as a complex ecosystem, with the wellbeing, engagement, and performance of teachers, students, and principals all intertwined. The report combines decades of surveys of 5 million American teachers and principals with the results of the Gallup Student Poll, now billed as the largest survey of American students with 600,000 5th through 12 grade participants, and several large follow-up studies. “The real bummer is [teachers] don’t feel their opinions matter.” The Gallup polls ask students, teachers, principals, and other professionals about their levels of hope, emotional engagement, and well-being at work or school. Brandon Busteed, the executive director of Gallup Education, says that in some ways, the point Gallup is making with this line of research is even more “provocative.” So how are we doing on these soft measures? Related