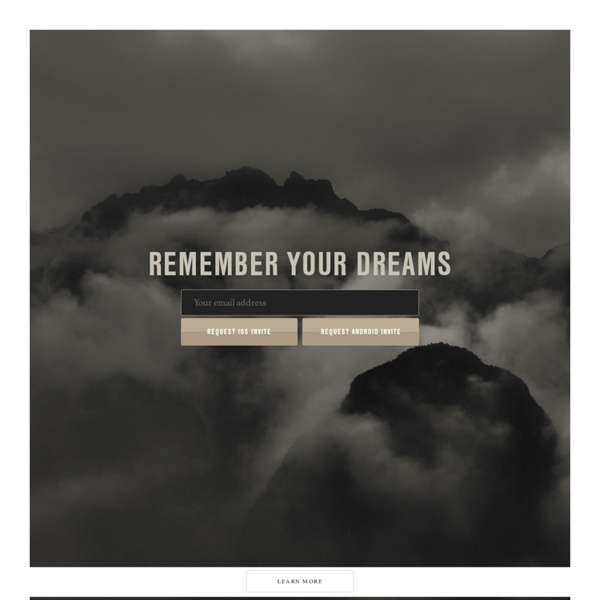 Discover Amazing New Websites & Services - Wibki: Unlock the Web! Discover Amazing New Websites & Services – Wibki: Unlock the Web! I love discovering new websites. We are fortunate to live in a revolutionary era; an era that allows us access to infinite knowledge and offers services that were denied from us only a few years back… The Internet provides us with endless possibilities, no matter what our interests, craves or needs are. The problem is that 90% of it consists of cute cats, porn, ‘how to get rich’ frauds, and other stumble baits… I love the instance acknowledgment when I encounter a landing page that is worthy of my time. When I finally manage to discover a site that really blows my mind or a service that I can actually see myself use, it feels extremely rewarding.

Paper Fold Effect in App Design - UI A round up of all cool paper fold design from dribbble. Paperfolding technique is one of the cool UI effects used in Mobile App because it works very well and quite realistic with touch gesture. Here, a few are pure concept and a few are actually a real implementations. About Kevin A Guide to Inventions and Discoveries: From Adrenaline to the Zipper Adrenaline: (isolation of) John Jacob Abel, U.S., 1897. Aerosol can: Erik Rotheim, Norway, 1926. Air brake: George Westinghouse, U.S., 1868.

Creative UI Design Examples for Great UX UX (User Experience) is all those elements and factors related to the user's interaction with a particular environment or device which generate a positive or negative perception of the product, brand or device. UX is subjective and focused on use. The standard definition of UX is "a person's perceptions and responses that result from the use or anticipated use of a product, system or service".

5 most incredible discoveries of the week A preschool paleontologist and a Shakespearean announcement make the list: 4-Year-Old's Big Find in Texas: a Dino: For 4-year-old Wylie Brys, a chance dig in the dirt behind a Texas shopping center led to a giant discovery: the fossil of what could be a 100-million-year-old dinosaur. Scientists from SMU helped extract the fossil this week, seven months after Wylie's find, and they think it could be that of a rare land-dwelling nodosaur. Wylie's dad reveals how the pint-sized paleontologist made his find. The Brontosaurus Is Back, Study Says: New research suggests the Brontosaurus really did exist, some 112 years after scientists declared the opposite was true. After an "exhaustive" study, British and Portuguese paleontologists say the Brontosaurus merits its own genus after all—and they use those iconic necks to back their claim.

Is the Universe a Simulation? Photo Gray Matter By EDWARD FRENKEL