Report of the World Commission on Environment and Development: Our Common Future - A/42/427 Annex 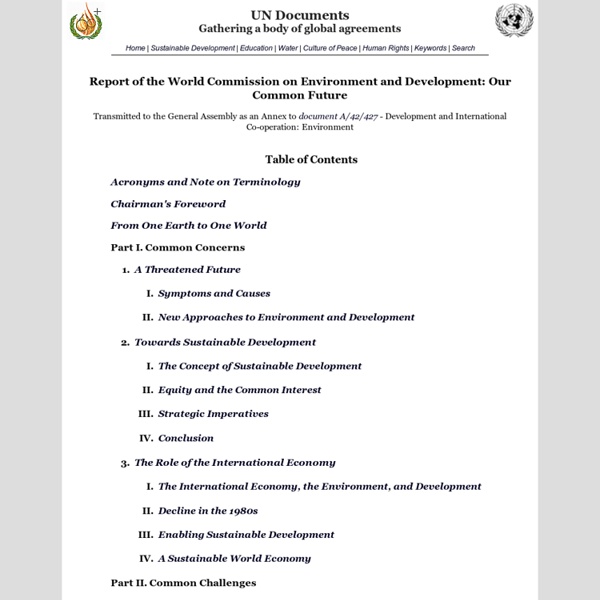 Brundtland Commission Formally known as the World Commission on Environment and Development (WCED), the Brundtland Commission's mission is to unite countries to pursue sustainable development together. The Chairman of the Commission, Gro Harlem Brundtland, was appointed by Javier Pérez de Cuéllar, former Secretary General of the United Nations, in December 1983. At the time, the UN General Assembly realized that there was a heavy deterioration of the human environment and natural resources. To rally countries to work and pursue sustainable development together, the UN decided to establish the Brundtland Commission. History[edit] After the 1972 Stockholm Conference on the Human Environment and the 1980 World Conservation Strategy of the International Union for the Conservation of Nature, the leaders of our world realized that we needed to create an organization whose sole purpose was to raise awareness of the need for sustainable development. Events Before Brundtland[edit] "8. Brundtland Report[edit]

Commodity Prices and the Mistake of 1937: Would Modern Economists Make the Same Mistake? Gauti Eggertsson In 1937, on the eve of a major policy mistake, U.S. economic conditions were surprisingly similar to those in the nation today. Consider, for example, the following summary of economic conditions: (1) Signs indicate that the recession is finally over. (2) Short-term interest rates have been close to zero for years but are now expected to rise. (3) Some are concerned about excessive inflation. (4) Inflation concerns are partly driven by a large expansion in the monetary base in recent years and by banks’ massive holding of excess reserves. (5) Furthermore, some are worried that the recent rally in commodity prices threatens to ignite an inflation spiral. While this summary arguably describes current trends, it is taken from an account of conditions in 1937 that appears in “The Mistake of 1937: A General Equilibrium Analysis,” an article I coauthored with Benjamin Pugsley. The Mistake and Its Consequences The Role of Commodity Prices

Section 4 Main An understanding of demand and supply gives us the fundamentals of how markets operate - the determination of prices and output in the product market for example. However, responses of output to a change in the price of the good are not uniform across goods. In analyzing the consumer's demand curve for a good, we have shown that as the price of the good rises, our quantity demand for that good decreases. How much, if at all, our quantity demanded of a good falls when the good's price rises, depends on the nature of the good. There are some goods that we are reluctant or unable to sacrifice consumption when the price rises. Other goods have an abundance of equivalent or nearly equal substitutes that we gracefully shift our consumption towards when the price of the good rises. The Price Elasticity of Demand We begin our discussion of elasticity with the price elasticity of demand. In the graphs above, we show the two extremes of the price elasticity of demand. Elasticity Over Time

Ecological Economics : A typology for the classification, description and valuation of ecosystem functions, goods and services SPECIAL ISSUE: The Dynamics and Value of Ecosystem Services: Integrating Economic and Ecological Perspectives a International Center for Integrative Studies (ICIS), Maastricht University and Environmental Systems Analysis Group, Wageningen University, PO Box 616, NL-6200 MD Maastricht, The Netherlandsb Center for Environmental Studies, Institute for Ecological Economics, University of Maryland, USA Available online 9 May 2002 Choose an option to locate/access this article: Check if you have access through your login credentials or your institution Check access Show more Show less Get rights and content Abstract An increasing amount of information is being collected on the ecological and socio-economic value of goods and services provided by natural and semi-natural ecosystems. Keywords Classification of ecosystem functions; Typology of goods and services; Ecological and socio-economic valuation Copyright © 2002 Elsevier Science B.V.

The Problem of Economic Calculation - Ludwig von Mises Since recent events helped socialist parties to obtain power in Russia, Hungary, Germany and Austria, and have thus made the execution of a socialist nationalization program a topical issue, Marxist writers have themselves begun to deal more closely with the problems of the regulation of the socialist commonwealth. But even now they still cautiously avoid the crucial question, leaving it to be tackled by the despised "Utopians." They themselves prefer to confine their attention to what is to be done in the immediate future; they are forever drawing up programs of the path to Socialism and not of Socialism itself. The only possible conclusion from all these writings is that they are not even conscious of the larger problem of economic calculation in a socialist society. To Otto Bauer the nationalization of the banks appears the final and decisive step in the carrying through of the socialist nationalization program. "The socialist state," he says, Notes [1] Cf. [2] Cf. [3] Cf. [4] Cf.

Daily Treasury Yield Curve Rates These data are also available in XML format by clicking on the XML icon. The schema for the XML is available in XSD format by clicking on the XSD icon. Tuesday Apr 15, 2014 * 30-year Treasury constant maturity series was discontinued on February 18, 2002 and reintroduced on February 9, 2006. From February 18, 2002 to February 8, 2006, Treasury published alternatives to a 30-year rate. See Long-Term Average Rate for more information. Treasury discontinued the 20-year constant maturity series at the end of calendar year 1986 and reinstated that series on October 1, 1993. Treasury Yield Curve Rates. Treasury Yield Curve Methodology. Negative Yields and Nominal Constant Maturity Treasury Series Rates (CMTs). As such, Treasury will restrict the use of negative input yields for securities used in deriving interest rates for the Treasury nominal Constant Maturity Treasury series (CMTs).

United States federal budget Fiscal Year 2013 U.S. Federal Spending – Cash or Budget Basis. Fiscal Year 2013 U.S. If Congress fails to pass an annual budget, a series of Appropriations bills must be passed as "stop gap" measures. Budget principles[edit] The U.S. Each year, the President of the United States submits his budget request to Congress for the following fiscal year as required by the Budget and Accounting Act of 1921. The federal budget is calculated largely on a cash basis. Federal agencies cannot spend money unless funds are authorized and appropriated. Budget resolutions and appropriations bills, which reflect spending priorities of Congress, will usually differ from funding levels in the president's budget. Budget authority versus outlays[edit] The amount of budget authority and outlays for a fiscal year usually differ because the government can incur obligations for future years. Congress may both authorize and appropriate in the same bill. Federal budget data[edit] Federal budget projections[edit]

File:Revenue and Expense to GDP Chart 1993 - 2008.png Budget and Economic Outlook: Fiscal Years 2011 to 2021 The United States faces daunting economic and budgetary challenges. The economy has struggled to recover from the recent recession, which was triggered by a large decline in house prices and a financial crisis—events unlike anything this country has seen since the Great Depression. During the recovery, the pace of growth in the nation's output has been anemic compared with that during most other recoveries since World War II, and the unemployment rate has remained quite high. For the federal government, the sharply lower revenues and elevated spending deriving from the financial turmoil and severe drop in economic activity—combined with the costs of various policies implemented in response to those conditions and an imbalance between revenues and spending that predated the recession—have caused budget deficits to surge in the past two years. The Economic Outlook As the recovery continues, the economy will add roughly 2.5 million jobs per year over the 2011–2016 period, CBO estimates.