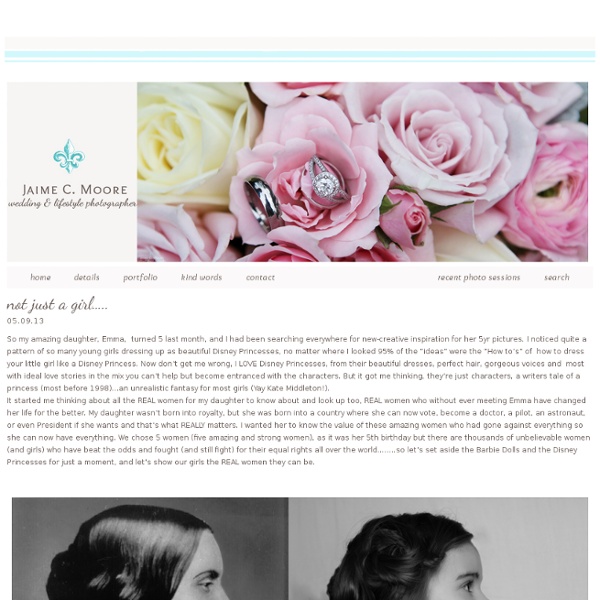 So my amazing daughter, Emma, turned 5 last month, and I had been searching everywhere for new-creative inspiration for her 5yr pictures. I noticed quite a pattern of so many young girls dressing up as beautiful Disney Princesses, no matter where I looked 95% of the “ideas” were the “How to’s” of how to dress your little girl like a Disney Princess. Now don’t get me wrong, I LOVE Disney Princesses, from their beautiful dresses, perfect hair, gorgeous voices and most with ideal love stories in the mix you can’t help but become entranced with the characters. But it got me thinking, they’re just characters, a writers tale of a princess (most before 1998)…an unrealistic fantasy for most girls (Yay Kate Middleton!). It started me thinking about all the REAL women for my daughter to know about and look up too, REAL women who without ever meeting Emma have changed her life for the better. *NEW* February 7, 2014 - We are so thankful and overwhelmed by such an amazing response.

Leading Men Age, But Their Love Interests Don’t Yesterday, Kristen Stewart fell out of the con-artist comedy Focus after Will Smith replaced Ben Affleck as the male lead; according to Variety, she was nagged by "the feeling that the age difference between the two would be too large a gap." For the record, Smith is a mere four years older than the 40-year-old Affleck, and if it seems a little odd that either of them would be considered a romantic partner for the 23-year-old Stewart in the first place … well, welcome to Hollywood. It seems like time and time again, male movie stars are allowed to age into their forties, fifties, and even sixties while the ages of their female love interests remain firmly on one side of the big 4-0, but is this a perception borne out of reality? To find out for sure, Vulture has analyzed the data of ten middle-aged leading men and the ages of the women they've wooed onscreen; you'll see the results in the charts below. How'd we arrive at our conclusions? Scroll down to check out our findings in-depth.

Look amazing in any photo with these ten easy tricks selfie Alesandra Dubin iVillage Dec. 31, 2013 at 5:00 PM ET Courtesy Know Your Meme / How to Be More Photogenic PSA: Your Default Narrative Settings Are Not Apolitical Image taken from tumblr. Recently, SFF author Tansy Rayner Roberts wrote an excellent post debunking the idea that women did nothing interesting or useful throughout history, and that trying to write fictional stories based on this premise of feminine insignificance is therefore both inaccurate and offensive. To quote: “History is not a long series of centuries in which men did all the interesting/important things and women stayed home and twiddled their thumbs in between pushing out babies, making soup and dying in childbirth.History is actually a long series of centuries of men writing down what they thought was important and interesting, and FORGETTING TO WRITE ABOUT WOMEN. It’s also a long series of centuries of women’s work and women’s writing being actively denigrated by men. Writings were destroyed, contributions were downplayed, and women were actively oppressed against, absolutely.But the forgetting part is vitally important.

40 Movies about photography every photographer should watch Film making and photography go hand-in-hand. In film making, the art of cinematography is lost with photography. The skill to present moving images in such postcard-like material is in itself a direct descendant of the art of still-photography. little girls R better at designing heroes than you Little Girls Are Better At Designing Superheroes Than You is a project where superheroes are drawn based on the costumes of young girls. This submission is drawn by the talented SaEun Moon at This submission is Amazing Girl! This submission is Leopard Girl and her sidekick, Mouse Girl, drawn by the talented SaEun Moon at 9 Facts That Prove Traditional Definitions Of Gender Roles Are Bullsh*t Remember the good old days when men were men and women were women? You know, when the manliest of men wore their hair long and curly with their best high heels. Oh, maybe you were imagining a slightly different picture of modern gender? Consider the earring. Associated exclusively with women for about 200 years, guys have recently started to reclaim them. "In the last two decades," Valerie Steele, director of the Museum at the Fashion Institute of Technology, told The Huffington Post, "men have gotten in touch with their inner pirate."

Waste Land by Vik Muniz Ordinarily I don’t feature movies on Lenscratch, but after watching Wasteland recently (on Netflix), is am moved to broadcast the importance of this film. Artist Vik Muniz shows us what the power of humanity and art can create, and how it can change lives. Wasteland was nominated for an Academy Award, and a long roster of other awards including the Sundance Audience Award for Best World Cinema Documentary. Filmed over nearly three years, WASTE LAND follows renowned artist Vik Muniz as he journeys from his home base in Brooklyn to his native Brazil and the world’s largest garbage dump, Jardim Gramacho, located on the outskirts of Rio de Janeiro. There he photographs an eclectic band of “catadores”—self-designated pickers of recyclable materials.

Things We Don't Talk About Share on Tumblr Things We Don’t Talk About: Woman’s Stories from the Red Tent is a groundbreaking 72-minute documentary film by award winning filmmaker Dr. Isadora Gabrielle Leidenfrost. Spontaneous and organic, a Red Tent is a red textile space where women gather to rest, renew, and often share deep and powerful stories about their lives. Women Fighters In Reasonable Armor Here’s a suggestion for reasonable armour in a more modern sense. She’s a soldier of IDS, a vicious PMC seeking to conquer a post-apocalyptic world in Advance Wars: Days of Ruin. I like it, very PMC-y. Thanks :)

These 102-year-old pictures of a girl in red have captivated the Internet Every time we see a photo from the distant past, we see it in black and white. Because of that colorless nostalgic feel, it makes it difficult to imagine those moments as real, true moments that happened. It just does. That may be why the entire Internet is totally captivated by these gorgeous color photographs taken by Mervyn O’Gorman, who used potato starch to make these vivid shots pop with beautiful hues back in 1913. Mervyn’s technique is technically called “autochrome.” The photos were taken of his daughter, Christina, over 100 years ago — and they’re absolute perfection.

Most popular photography on StumbleUpon! 2011 is over, In this article, I am showcasing the most beautiful photographs that were stumbled on StumbleUpon. Let us take a look at this truly jaw-dropping collection and enjoy! Source: StumbleUpon *None of the images on this page are mine,they were found on StumbleUpon, meant to inspire.Any problems, just email.