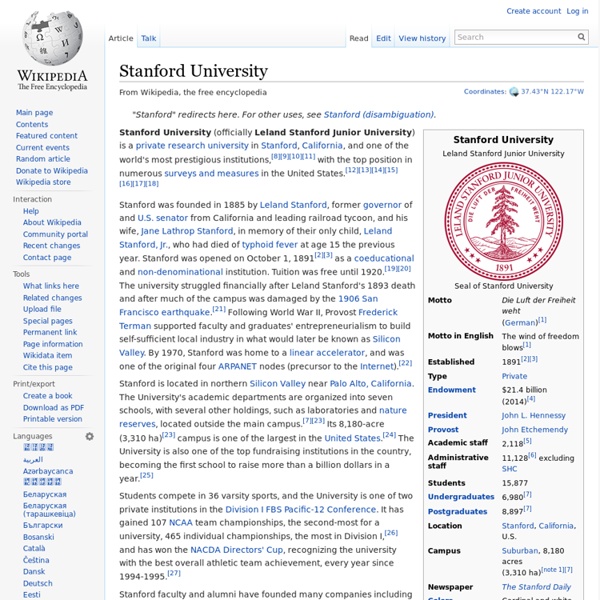 Stanford University (officially Leland Stanford Junior University) is a private research university in Stanford, California, and one of the world's most prestigious institutions,[8][9][10][11] with the top position in numerous surveys and measures in the United States.[12][13][14][15][16][17][18] Stanford was founded in 1885 by Leland Stanford, former governor of and U.S. senator from California and leading railroad tycoon, and his wife, Jane Lathrop Stanford, in memory of their only child, Leland Stanford, Jr., who had died of typhoid fever at age 15 the previous year. Stanford was opened on October 1, 1891[2][3] as a coeducational and non-denominational institution. Stanford is located in northern Silicon Valley near Palo Alto, California. Students compete in 36 varsity sports, and the University is one of two private institutions in the Division I FBS Pacific-12 Conference. History[edit] Origins and early years (1885–1906)[edit] Foundation[edit] Physical layout[edit] Early finances[edit] Related:  The Hoover Institute • 2015/05/29

Stanford University Press Hoover Institution University of California, Berkeley The University of California, Berkeley (also referred to as Berkeley, UC Berkeley, California or simply Cal)[8] is a major public research university located in Berkeley, California. It is the flagship campus of the University of California system, one of three parts in the state's public higher education plan, which also includes the California State University system and the California Community Colleges System. It is considered by Times Higher Education as a member of a group of six university brands that lead in world reputation rankings in 2015[9] and is ranked third on the U.S. Berkeley faculty, alumni, and researchers have won 72 Nobel Prizes (including 30 alumni Nobel laureates), nine Wolf Prizes, seven Fields Medals, 18 Turing Awards, 45 MacArthur Fellowships,[18] 20 Academy Awards, and 11 Pulitzer Prizes. History[edit] View, from Memorial Glade, of Sather Tower (The Campanile), the center of UC Berkeley. Academics[edit] Undergraduate programs[edit] Faculty and research[edit]

Brains in Silicon Welcome to Brains in Silicon. Learn about the lab, get to know the brains that work here, and find out about new projects that you could join. We have crafted two complementary objectives: To use existing knowledge of brain function in designing an affordable supercomputer—one that can itself serve as a tool to investigate brain function—feeding back and contributing to a fundamental, biological understanding of how the brain works. We model brains using an approach far more efficient than software simulation: We emulate the flow of ions directly with the flow of electrons—don't worry, on the outside it looks just like software. Welcome and enjoy your time here!

G. Records | MidFirst Bank Richey and Records discussed below. Contingent upon shareholder approval of the 2005 Director Plan, in December 2004, Harold T. McCormick and George J. Records elected to defer 100% of their 2005 director compensation and to receive contingently McCormick and Records were contingently granted (subject to shareholder approval of the plan) stock options on 4,542 and 1,030 shares, respectively, with a $55.05 per share exercise price, the fair market value of Torchmark common stock on the date of the grant. Based on these categorical standards, after review and deliberation at their February 26, 2004 meeting, the Board determined that the following independent directors meet the standards set by the Board: Charles E. It was determined in February 2005 that George J.

About From hikers to hunters, birders to beach-combers, the world is filled with naturalists, and many of us record what we find. What if all those observations could be shared online? You might discover someone who finds beautiful wildflowers at your favorite birding spot, or learn about the birds you see on the way to work. If enough people recorded their observations, it would be like a living record of life on Earth that scientists and land managers could use to monitor changes in biodiversity, and that anyone could use to learn more about nature. That's the vision behind iNaturalist.org. So if you like recording your findings from the outdoors, or if you just like learning about life, join us! A little history iNaturalist.org began as the Master's final project of Nate Agrin, Jessica Kline, and Ken-ichi Ueda at UC Berkeley's School of Information in 2008. A whole lot of thanks Staff Ken-ichi Ueda Scott Loarie Alex Shepard Alex is a software developer and an artist. Patrick Leary

SearchWorks (SULAIR) MidFirst Bank MidFirst Bank is an Oklahoma City, Oklahoma-based bank, concentrated in the state of Oklahoma and Phoenix, Arizona. It is one of the largest privately owned banks in the United States and the largest in Arizona. History[edit] MidFirst traces its roots to the Midland Mortgage Company, which was founded in 1950 by a group of Oklahoma City-area bankers. In 1982, Midland Financial purchased a thrift charter and changed its name to MidFirst Bank; the new bank would provide the Midland Mortgage Company depository services for its escrows, as well as funding for mortgage origination activities. Changes in the mortgage industry in the 1980s and new senior management spurred Midland Mortgage Company, now led by Jeff Records, to close its mortgage origination offices and purchase portfolios of mortgage servicing rights and mortgage-backed securities, which had high returns on investment. MidFirst then moved into its second market. Management[edit] MidFirst chairman and CEO G. References[edit]