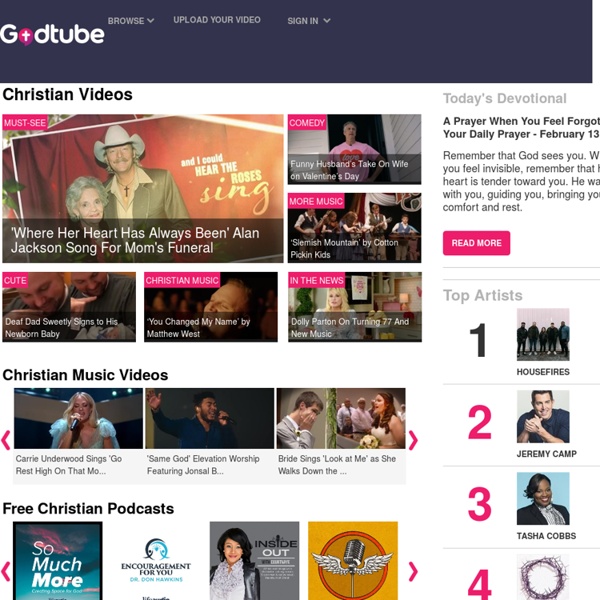 Download & Streaming : Moving Image Archive : Internet Archive Anime (/ˈænəˌmeɪ/) (Japanese: アニメ) is a style of hand-drawn and computer animation originating in, and commonly associated with, Japan. The word anime is the Japanese term for animation, which means all forms of animated media. Outside Japan, anime refers specifically to animation from Japan or as a Japanese-disseminated animation style often characterized by colorful graphics, vibrant characters and fantastical themes. The culturally abstract approach to the word's meaning may open... Collections of items recorded from television, including commercials, old television shows, government proceedings, and more.

To Believe : Fulfilled Prophecy: Evidence for the Reliability of the Bible (The remaining 500 or so reach into the future and may be seen unfolding as days go by.) Since the probability for any one of these prophecies having been fulfilled by chance averages less than one in ten (figured very conservatively) and since the prophecies are for the most part independent of one another, the odds for all these prophecies having been fulfilled by chance without error is less than one in 10 2000 (that is 1 with 2000 zeros written after it)! God is not the only one, however, who uses forecasts of future events to get people's attention. Satan does, too. Through clairvoyants (such as Jeanne Dixon and Edgar Cayce), mediums, spiritists, and others, come remarkable predictions, though rarely with more than about 60 percent accuracy, never with total accuracy. Messages from Satan, furthermore, fail to match the detail of Bible prophecies, nor do they include a call to repentance.

Christian Book Publishers Looking for Writers We are Christian book publishers based in Singapore. For the past 10 years we have been editing books for our clients and helping them through the publishing process. Now, we are ready to bring out our own line of publications under the CreativeJuicesBooks imprint. Why is Christianity the only way? By Michael L. Brown Isn’t it the height of arrogance to claim that the only way people can come into right relationship with God is through Jesus? At first blush, the answer would seem to be yes. After all, there are sincere, moral, deity-fearing people in every religion of the world. Will You Serve Others If You Have Power? By Beth, Singapore Before the Passover celebration, Jesus knew that his hour had come to leave this world and return to his Father. He had loved his disciples during his ministry on earth, and now he loved them to the very end. 2 It was time for supper, and the devil had already prompted Judas, son of Simon Iscariot, to betray Jesus. 3 Jesus knew that the Father had given him authority over everything and that he had come from God and would return to God. 4 So he got up from the table, took off his robe, wrapped a towel around his waist, 5 and poured water into a basin. Then he began to wash the disciples’ feet, drying them with the towel he had around him. John 13:1-5 NLT Jesus possesses supreme authority, for He rules over all things (John 13:3).

Database Error In 1997 the first social network was created called sixdegrees.com and was the forerunner of the modern social networks that started to gain traction in 2002. The first of the modern next generation social media networks that followed in 2002, had the the funky name of Friendster, which to my ear sort of sounds like a hybrid cross between a “Friend” and a “Hamster”. As with any good idea it was quickly copied (“ripped off” is another phrase that comes to mind) and MySpace was created and launched in 2003. This social media network dominated for the next 5 years as teenagers became addicted to the interactive and multimedia rich, self publishing web platform that allowed them to share music, content and information with their friends. The addictive power of the social network was on display to many parents as dinner tables around the world were deserted by teens after gulping down their meat and potatoes, as they rushed off to their computers to continue their “MySpacing” 1.

Social Media From Scratch Coming Soon: A New Video Series from Mark W. Schaefer: Social Media Explained! ShareThis Copy and Paste Most Valuable Global Brands Recovering Faster Than S&amp;P 500 Slightly off-topic, but likely worth a look to anyone with a vested interest in how the global economy fares (which means pretty much everyone reading this blog): Millward Brown Optimor has compared the financial performance of its list of most valuable brands – you know, the one that pegs Google to be the most valuable at a whopping $100 billion – with the S&P 500 as a whole. The analysis shows the top 100 brands, which Millward Brown refers to as the BrandZ Portfolio and includes many technology companies like Apple, Vodafone, Microsoft, Nokia, BlackBerry, Intel and others, are recovering from the recession at a faster pace than the market. As the chart above shows, the most valuable global brands have been outperforming the S&P 500 for a number of years now but show a much faster recovery from the recession than the market in recent months. The BrandZ Portfolio is now worth 28% more than the S&P 500, and it has returned to profit (+5.6%) ahead of the market.

The Content Marketing Explosion [Infographic] Content marketing isn’t exactly a new marketing technique, but it’s seeing massive growth in 2012, with new and innovative ways to promote brand awareness and build customer retention. From articles and social media to data visualization such as infographics, brands are using these techniques to leverage their marketing efforts and create a wider reach. Big name companies are staying ahead of the game with content marketing, while startups who are specializing in this area, are getting off to a fast start.

Content Curation Can Inform, Engage Customers June 4, 2012 Both consumers and marketers are faced with an ever more fractured media landscape in which informative and engaging content can be hard to find. But enterprising marketers are taking the reins and curating their own content in the hopes of providing the material that their customers are searching for. These days, almost all marketers are finding, filtering and sharing content, according to content curation services provider Curata.

Download Disonic MP3 Music From Johnny Cash to Patsy Cline and Muddy Waters to Miles Davis, Mbop's iStores is the ideal portal to get your hands on those legendary tracks from music's golden age. Home to 5 independent and specialist record labels - Disonic, Nayco & Soundandvision. - each one has its own microsite where tracks and expertly-compiled albums can be downloaded from the key digital stores (iTunes, amazon, eMusic, Napster etc.). In essence, iStores is a veritable feast of vintage sounds from a plethora of industry icons - so what are you waiting for? Five More Myths about Bible Translations and the Transmission of the Text « Daniel B. Wallace There’s an old Italian proverb that warns translators about jumping in to the task: “Traduttori? Traditori!” Translation: “Translators? Traitors!” The English proverb, “Something’s always lost in the translation,” is clearly illustrated in this instance.