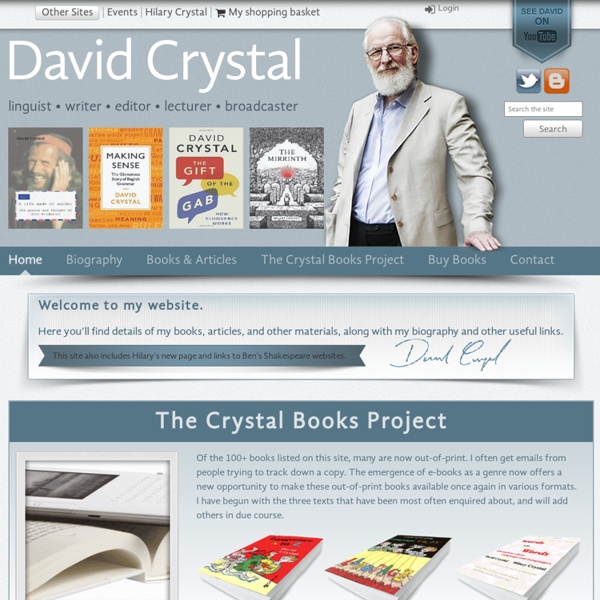 Home EasyBib: Free Bibliography Maker - MLA, APA, Chicago citation styles English: Understanding Shakespeare | Ben Crystal | Guardian Masterclasses William Shakespeare is considered by many to be the greatest playwright of all time. If you wish you knew a bit more about the Bard, or want to reawaken your passion for his plays and poems, don’t miss out on this fabulous masterclass with Ben Crystal. In the space of just two hours, you’ll receive fascinating insights into Shakespeare’s working processes – from how his famous sonnets were constructed to how his plays were rehearsed and performed. Ben is one of the world’s leading experts on Shakespeare, having founded the Passion in Practice theatre company and co-written many books on the subject. More about your teacher… Ben Crystal is an actor, producer and artistic director of Passion in Practice, which explores fresh approaches to acting in Shakespeare. Back to school is a new range of evening classes covering the subjects you once enjoyed, or always wanted to learn. Details

A Brief History of the English Language The English language belongs to the West Germanic branch of the Indo-European family of languages. The closest undoubted living relatives of English are Scots and Frisian. Frisian is a language spoken by approximately half a million people in the Dutch province of Friesland, in nearby areas of Germany, and on a few islands in the North Sea. The history of the English language has traditionally been divided into three main periods: Old English (450-1100 AD), Middle English (1100-circa 1500 AD) and Modern English (since 1500). Old English (450 - 1100 AD): During the 5th Century AD three Germanic tribes (Saxons, Angles, and Jutes) came to the British Isles from various parts of northwest Germany as well as Denmark. Through the years, the Saxons, Angles and Jutes mixed their different Germanic dialects. Before the Saxons the language spoken in what is now England was a mixture of Latin and various Celtic languages which were spoken before the Romans came to Britain (54-5BC).

Ben Crystal, Author at Personal Liberty® Join the fun as Ben Crystal peers into the future to see how 2016 will shake out for some of the Great Eight’s favorite subjects. Presented in hi-def, FOR FREE! It’s The Great Eight, from the Personal Liberty Digest®! According to spokeshole John Kirby, the State Department had a terrific year, filled from Countering Violent Extremism Summits to San Bernardino, California, with “success.” In 2015, the Republicans stripped the ball from the Democrats and charged toward the wrong end zone. What do people on the naughty list want? ‘Twas the night before Christmas, and in the White House not a cretin was stirring; not even Sharpton, that louse. Who’s this Paul Ryan guy? Here at the Personal Liberty Digest®, we’re polling higher than Lindsay Graham! You had to know it was coming. The Democrats are on someone’s side; it’s just not yours. A Democratic whodunit? As I’m writing this, it’s 9:15 p.m. Giving thanks this season? Obama plays to lose. Poor little rich kid. Pining for Howard Dean.

November 2011 Open-plan classrooms have left trailing behind them somewhat of a legacy in terms of the way we think about newer open learning spaces. One legacy in particular, I suspect, is an enculturated hesitancy for schools to open up spaces again. The collective memory of an education innovation that generally speaking did not work is a strong one and comparisons between the two are understandably inevitable. Imagine you'd spent several years teaching in an open-plan space back in the seventies or eighties and you hadn’t enjoyed it. It is not entirely surprising to hear then that those teachers who taught in these spaces earlier in their careers are viewing our new teaching and learning environments with some suspicion. The tendency it seems is to superimpose 'open-plan' memories onto new open learning spaces and to recall all that that represents.

What's it like to speak Shakespeare around the globe? As we celebrate the 450th anniversary of Shakespeare’s birth, UK actor, author and producer Ben Crystal relates what it's like to speak the work of a playwright who has contributed so many new words and phrases to the English language. You can also attend the English Language Council Lecture with Ben Crystal in London or watch it as a live-stream (both free registration Opens in a new tab or window.) on 12 February. The lecture is presented by the English-Speaking Union Opens in a new tab or window. and the British Council Opens in a new tab or window. in partnership. I'm a lucky man, but I can’t count the number of times I have been smiled at with toleration rather than agreement, after I’ve suggested Shakespeare's plays are manuals on how to perform, not books to be read. I’ve said it so many times surely everyone must have heard this by now, but still people look at me as if I’ve suggested we teach our younglings how to slaughter fluffy cats with wooden spoons.