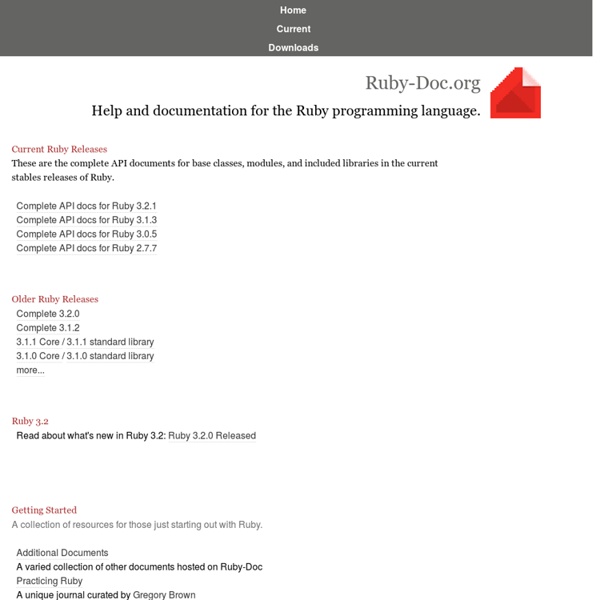 Ruby Object Oriented Programming From Techotopia Purchase and download the PDF and ePub versions of this Ruby eBook for only $8.99 Ruby is an object oriented environment and, as such, provides extensive support for developing object-oriented applications. PHP coding standards - tech.tmw.co.uk Coding Standards and Best Programming Practices for PHP Contents Naming Conventions and Standards Ruby on Rails Security Guide Ruby on Rails does a decent job in handling security concerns in the background. You will have to configure your application to avoid few security attacks while plugins would be required for many security concerns which are not at all or poorly managed by rails. In this article I have described the security issues related to a ruby on rails web application. Ruby Installer for Windows: Project Filelist Below is a list of all files of the project. Before downloading, you may want to read Release Notes and ChangeLog (accessible by clicking on release version). Size Arch Type 1.

Ruby Programming Ruby is an interpreted, object-oriented programming language. Its creator, Yukihiro Matsumoto, a.k.a “Matz,” released it to the public in 1995. Its history is covered here. Learn Ruby with the EdgeCase Ruby Koans The Koans walk you along the path to enlightenment in order to learn Ruby. The goal is to learn the Ruby language, syntax, structure, and some common functions and libraries. We also teach you culture. Testing is not just something we pay lip service to, but something we live. It is essential in your quest to learn and do great things in the language.

How to Deploy Python WSGI Applications Using uWSGI Web Server with Nginx Introduction As introduced in our Python Web Server Comparison article, uWSGI is a vast project, capable of doing much more than serving web applications alone. However, its wide array of functionality, combined with relative ease of configuring it, make it an excellent choice for many deployment needs– especially when it is coupled with Nginx. In this DigitalOcean article, we aim to discuss uWSGI in depth and go over the necessary steps for not just installing the server, but actually deploying Python applications based on various frameworks, covering every important step for small, midsize, and even relatively large ones for production. We will also discuss using Nginx (and why) with this set up, as Nginx and uWSGI are built natively to work with one another, forming the perfect stack for most deployments. Glossary