The Extraterrestrial Presence in our World Today: What You Aren’t Being Told 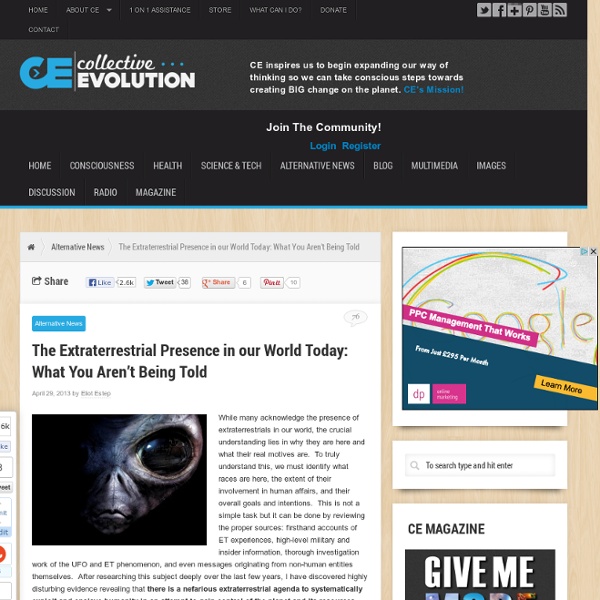 While many acknowledge the presence of extraterrestrials in our world, the crucial understanding lies in why they are here and what their real motives are. To truly understand this, we must identify what races are here, the extent of their involvement in human affairs, and their overall goals and intentions. This is not a simple task but it can be done by reviewing the proper sources: firsthand accounts of ET experiences, high-level military and insider information, thorough investigation work of the UFO and ET phenomenon, and even messages originating from non-human entities themselves. After researching this subject deeply over the last few years, I have discovered highly disturbing evidence revealing that there is a nefarious extraterrestrial agenda to systematically exploit and enslave humanity in an attempt to gain control of the planet and its resources. The intention is not to eradicate human beings but to employ them, to have them become workers for a greater “collective.” 1.

Aliens & UFO's - A Summary of Theories here are thousands of websites on the Internet which bring up the topic of UFO's and aliens. The theories as from where this phenomenon originates vary depending on from whose perspective one is looking. Is there a way to find the truth in this jungle of information and disinformation? This website has the ambition to look at the problem from different angles and let you, the reader decide and find a line of truth through it all. My intention is to present a balanced and sober view on the whole subject. I also encourage you to contact me with your own experiences and viewpoints on these phenomena, to spread more light on the subject.

UFO Jump Gate technology Used To Spray Us With Chem Trails!!!!!!!! Astral Traveller Confirms Chemplanes Utilize UFO Technologies [Editor's Note: The writer of this letter is an 18 year old female living in a Northeastern state. She began to astral travel at age 12. The Return of the Elder Race & Opening the Gateway of the Fifth Kingdom Nefertiti, reportedly ‘a princess from a foreign country’ became married to Akhenaton. By VICTORIA LEPAGE René Guénon’s assertion, culled from ancient esoteric sources, that in the remote past humanity’s first civilisation arose in the ice-free Arctic zone is not without geological support. According to the well-known researcher J.S. Gordon, “there is no scientific doubt that the polar ice caps have melted and reformed many, many times over and that this has always affected human society (plus animal and plant species), often catastrophically.”1

Uncovered! Scientists Secretly Release Top Secret Government Programs Last updated on April 5, 2014 at 12:00 am EDT by in5d Alternative News * Visit in5D Connection where you can find your soul mate or join one of our amazing groups. EVERYONE is welcome! Free ebook on Alien Mind, page 1 posted on Dec, 3 2005 @ 09:11 PM To read a free ebook on Alien Mind go to: www.eyepod.org... Alien Mind - a Primer begins where other books usually leave off. Rather than debate whether UFO's and aliens exist, Alien Mind quotes human experiencers and informative aliens in a startling, new exploration of the thoughts and assumptions of our extra-terrestrial neighbors. Fifty-eight years after Roswell, aliens are trying to get humans to step beyond the bounds of elite greed and failed ecology in order to develop a more mature kind of cosmic citizenship.

The Alien Files On April 8, 2011 the FBI unveiled the Vault, declassifying decades of top secret government documents for the first time. These documents cover topics that have plagued conspiracy theorists for the past decades. The files also contain thousands of reports of UFO sightings and alien activity. The Alien Files and The Conspiracy Files will uncover the truth of these secrect documents and offer a first hand look on the mysteries of the universe. Unsealed Files will launch in the Fall.

Introduction: More than Panspermia. by Brig Klyce Cosmic Ancestry is a new theory pertaining to evolution and the origin of life on Earth. It holds that life on Earth was seeded from space, and that life's evolution to higher forms depends on genetic programs that come from space. (It accepts the Darwinian account of evolution that does not require new genetic programs.) It is a wholly scientific, testable theory for which evidence is accumulating. The first point, which deals with the origin of life on Earth, is known as panspermia — literally, "seeds everywhere." The Reality of Alien Life in the Universe & the Newly Activated DNA in Humanity July 20, 2014 This Galactic Alignment of the solar system, which occurs every 25,772 years, just occurred again on Dec 21, 2012 and resulted in an energetic vibration change in the earth’s frequency that activated a dormant DNA in humans. This newly activated DNA had been sitting in our system waiting for an activation switch. The physical detection of the enhanced DNA can already be witnessed by medical intuitives who see a new chakra forming outside the human energy field. This new chakra, often referred to as the eighth chakra is the energy portal of unity consciousness that allows humans the ability to experience an expanded consciousness beyond current perceived limitations. Contact with civilizations from outside our third dimension began hundreds of thousands of years ago when they seeded planet earth.

Ancient Arrow Project Introduction to the WingMakers' Time Capsule (Code-named Ancient Arrow Project) Nearly 27 years ago, mysterious artifacts were found that led to one of the most intriguing scientific and anthropological discoveries ever made. A secret, unacknowledged department of the NSA -- responsible for extraterrestrial contact and technology assimilation -- took the discovery into their laboratory for the purposes of their own agenda. This secret organization is known as the Advanced Contact Intelligence Organization (ACIO) and has enjoyed complete anonymity until now. The discovery -- referred to by the ACIO as the Ancient Arrow project -- consisted of 23 chambers and connecting tunnels hollowed out deep within a huge, natural rock structure in a remote canyon of northern New Mexico. Inside this massive and well-hidden structure were incredible artifacts of a culture that was of indeterminate origins.

Rockefeller Email from 2002 Outlines Armageddon Agenda and Transition to New World In what appears to be a genuine email sent from Rockefeller Global Communications, the globalist elite agenda supporting a destructive planetary shift is outlined with stunning clarity. The message is authentic, powerful, and prophetic and is something that should be sincerely considered by every person. It serves as a great reminder to consider your life and its meaning deeply, for we are living in extraordinary times indeed. This is no regular lifetime as the stakes are very high this time around, personally and collectively. We must face the times ahead directly and with great courage, objectivity, and strength if we are to survive and live through a world in decline.

Humanity In An All-Out Effort to Save Itself From Government Bernie SuarezActivist Post The experience of humanity is driven and defined by our own consciousness, which is a product of our sophisticated brain functions. We are consciousness in every way shape and form. Free E-Books, Papers, and Articles by Wes Penre and Other Authors (Conspiracy/Spiritual/Extraterrestrial) Thanks, Gre! E-Books, Papers, and Articles by Wes Penre: Penre, Wes [2009]: “The Myth Around Supriem David Rockefeller” Penre, Wes [1998-2011]: “The Wes Penre Papers – A Journey Through the Multiverse: (Introductory Level of Learning): Introductory Paper #1: Basic Information on the Global Elite a.k.a. “The Shadow Government”

Hacking Knowledge: 77 Ways To Learn Faster, Deeper, & Better If someone granted you one wish, what do you imagine you would want out of life that you haven’t gotten yet? For many people, it would be self-improvement and knowledge. Newcounter knowledge is the backbone of society’s progress.